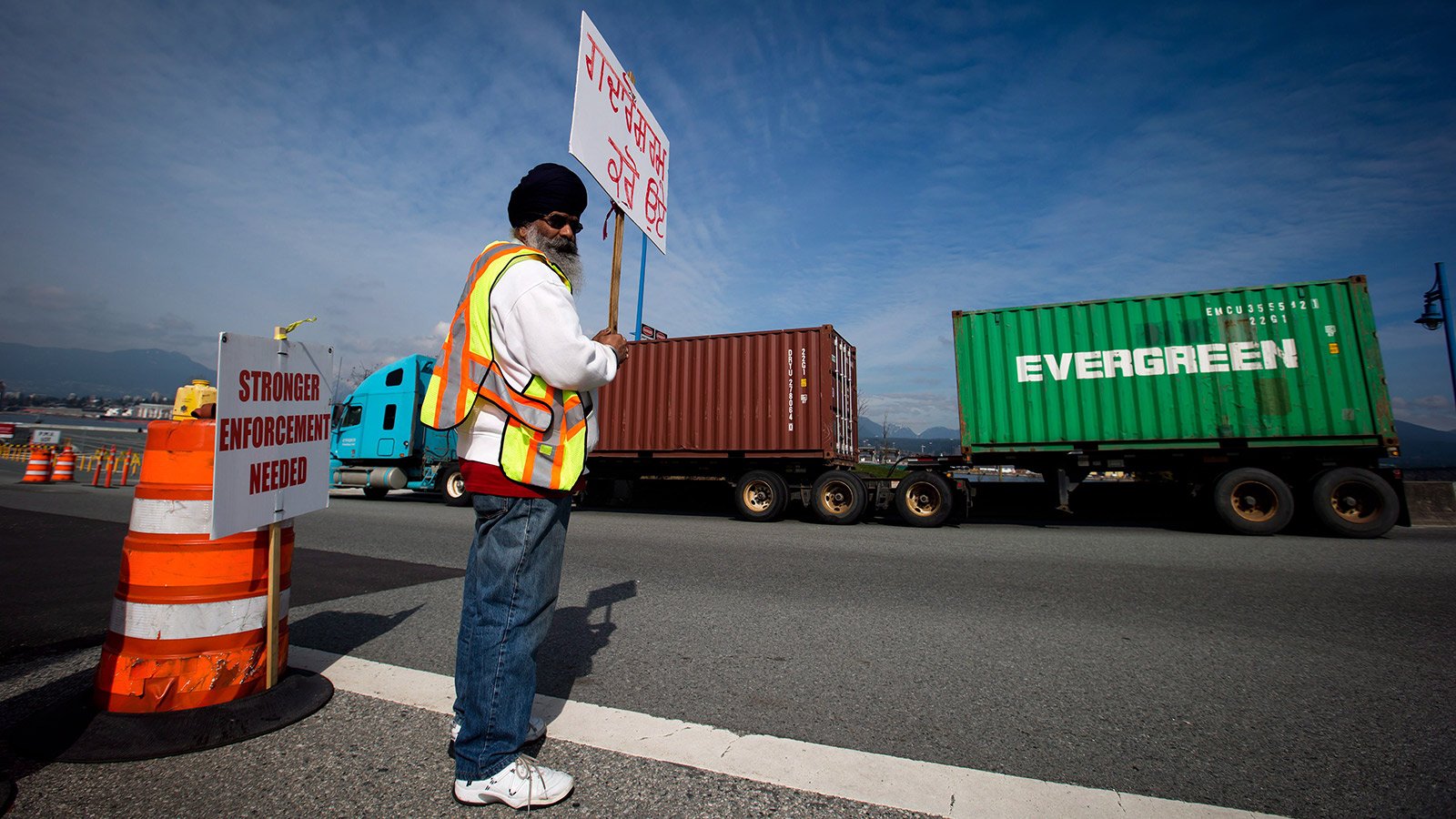 VANCOUVER – British Columbia, Ottawa and port officials in Vancouver announced new measures Wednesday designed to force truckers at Canada’s largest port to return to their vehicles, announcing back-to-work legislation for unionized workers and termination of licences for others.

The legislation, which will affect about 250 union members of Unifor who’ve been on strike since the beginning of last week, will be tabled as early as next Monday, a B.C. government news release said.

At the same time, Port Metro Vancouver said it informed as many as 150 truckers that their licences and permits to access the port would not be renewed once they expire in the spring.

“The licence privileges are just that, they’re a privilege, not a right,” said Peter Xotta, vice president of planning and operations for Port Metro Vancouver, in a phone interview.

Wednesday’s announcement represented the strongest reaction to the strike so far by the two levels of government, almost a week after proposing a 14-point plan designed to convince truckers to return to work. The truckers rejected the plan — which included pay increases and other changes to how their wages are structured — as inadequate.

The unionized truckers went on strike on March 10, joining roughly 1,000 non-unionized workers who walked off the job last month.

The dispute has prompted dire warnings from B.C. Premier Christy Clark and Prime Minister Stephen Harper, who both said the strike was damaging the national economy but initially insisted it was the other’s responsibility to figure it out.

Wednesday’s news release said the back-to-work legislation will include a 90-day “cooling off period” for the unionized workers.

Earlier this week, the port warned “a continued refusal by some truckers to provide such service is likely to result in suspension or termination of their permits by Port Metro Vancouver.”

Silvester’s statement said the port won’t be renewing licences or permits that are about to expire. On Wednesday, the port notified between 100 and 150 truckers their licences would not be renewed.

Xotta said truckers who have been working through the port disruption or who are prepared to return to work immediately will have their licences or permits extended.

“Those folks who refuse to return to work clearly would not need a licence because they’re not accessing the port,” he said.

Xotta said he expects to issue additional termination notices for the licences that are up for renewal in May and June.

The federal government referred calls to B.C. Transportation Minister Todd Stone, who could not be reached for comment.

The Vancouver Container Truckers’ Association, which is a branch of Unifor that represents the unionized workers, issued a news release condemning the back-to-work legislation.

“The minister can’t expect to stick his head in the sand and make this go away,” Johal said in the statement. “A negotiated settlement is the only sustainable solution.”

Manny Dosange of the United Truckers’ Association of B.C., a group that represents non-unionized truckers, said terminating licences won’t solve the larger issues that are at the heart of the dispute.

“Once again, they’re trying to bully us,” he said in an interview. “If they want to cancel licences, go ahead. But it’s not going to fix their problem, either.”

Dosange questioned whether the port would be able to find enough truckers to replace workers whose licences are terminated.

The 14-point plan was crafted with the help of a veteran labour mediator, who was appointed by the federal government earlier this month.

The truckers are not employed directly by Port Metro Vancouver. Instead, they are typically either independent contractors or sub-contractors working for shipping companies.

Minimum pay for non-unionized workers is set by an agreement put into place after a strike in 2005.

The port authority, which leases government-owned land and terminal space throughout the Vancouver region to private operators, has said about 2,000 truckers are licensed to work at the port.

Trucks transport about half of the containers that move in and out of the port, while the rest are moved by rail. The port has said only about to 10 to 15 per cent of normal truck traffic has been getting through.

The port estimates the strike has affected about $885 million worth of cargo per week, predominantly shipments destined to local markets in the Vancouver area or B.C.

Another sticking point is a lawsuit filed by the port late last month, alleging the striking truckers were blocking access to the port’s container terminals and intimidating drivers. As part of the government’s 14-point proposal, Port Metro Vancouver agreed to drop its lawsuit if the union signed on.

CN Rail filed a similar lawsuit last week and obtained a temporary injunction ordering truckers not to interfere with the company’s operations at a container yard in Surrey, southeast of Vancouver.