Calgary hoped to land 50,000 Amazon jobs. It may have to settle for two.

Despite a recent round of layoffs, Amazon has roughly 13,000 job openings right now. Here's a look at where the jobs are (and aren't).

Earlier this week online retail giant Amazon handed out several hundred pink slips to employees at its corporate headquarters in Seattle. It was a rare move for a company that has been in hyper-expansion mode in recent years—and, with its plans for a second massive headquarters at a yet-to-be determined location, is expected to add another 50,000 jobs.

But even now, despite these layoffs, Amazon has a massive number of job openings listed on its website: nearly 13,000 in total.

Here’s a map of the nearly 450 global cities where Amazon currently has job openings. However the positions are far from evenly distributed. As the legend shows, most locations (429 of them, represented by the yellow dots) have fewer than 100 openings. In fact, 77 per cent of those cities have 10 or fewer postings. Fully one-third of current job openings are in Seattle. 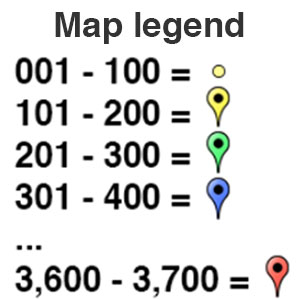 How about Canada? The big winner is Vancouver, where roughly 150 positions are available. Toronto follows next, with 67.

The big question is whether Toronto, the last remaining Canadian city on the shortlist for Amazon’s second headquarters, dubbed HQ2, will make the final cut. At stake is an estimated US$5-billion in investment and those 50,000 potential new jobs.

Several other Canadian cities had originally hoped to land HQ2, with Calgary once seen as a solid contender. And while there were other benefits for Calgary from participating in the HQ2 beauty pageant, the consolation prize in jobs can only be disappointing. Of all the places where Amazon is presently expanding its workforce, only two jobs are open in all of Alberta. No city is even specified, so those two jobs could still go to Edmonton or elsewhere.

READ: For longshot cities, bidding on Amazon HQ was never really about Amazon

These numbers are a reminder of what a retail goliath Amazon has become.

They also put into perspective the upheaval in that sector. Store closures and mass layoffs have become regular features of the retail industry as consumers take their shopping online. Those displaced workers won’t easily find employment with Amazon—the three biggest openings, account for nearly half of all positions, are for software developers, IT engineers and solutions architects.