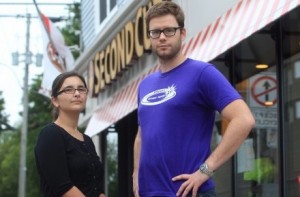 Coffee shop workers in Halifax are leading a push to unionize in what could serve as a model for baristas elsewhere in Canada, one national union says.

In recent months, employees at one cafe joined a union and workers at two others have launched efforts to do the same.

“In terms of the coffee shop industry, Halifax has been a bit of an anomaly.”

Employees at a Just Us! coffee shop in Halifax successfully joined Local 2 of the Service Employees International Union. The unionization came amid an allegation carried in local media reports that two workers were fired for trying to form a union, an accusation the employer denied, saying it had not been aware of a bid to unionize.

Workers at two Second Cup outlets in the city also recently voted whether to join the same union, though the Labour Board has yet to release their results.

“I’ve been taking calls from colleagues and co-workers across the country who’ve been following this trend in Halifax very closely and looking at it as a model for talking to young workers in other cities,” said Tracy.

“I think we’ll still be analyzing this one for years to come.”

Labour organizing in the service industry has been traditionally low for both ideological and economic reasons, said David Doorey, a professor of labour and employment law at York University in Toronto.

“It is a highly competitive industry, and employers believe unionization will pose a threat to their profit margins,” he said in an email.

“The labour force is often part-time, there is high turnover, and pay and benefits are low. Many of these workers do not have enough commitment to the job to tolerate the inevitable tensions that arise when the employer begins to resist the union campaign.”

But that may be changing, Tracy said.

“It’s not a temporary job anymore,” he said.

“We’re seeing a lot of young workers unable to find work in their field and find themselves working in coffee shops for a period of years.”

These usually university-educated workers often realize their stop-gap employment has become more long-term and they are motivated to turn these positions into good jobs, he added.

The move seems to mimic a similar trend among janitors across the country, as well as one that saw Halifax’s casino workers unionize in 2007, he said.

“It’s really an effort on the part of young workers stepping up and coming to the realization that these are the jobs they have — and they seem to be having for periods of years — and working to make those livable jobs.”

Jason Edwards, the union representative working with the Halifax baristas, said the interest to organize came entirely from employees.

“A lot of times we’ll go after an industry,” he said. “But this is really more worker-driven. It’s basically us responding to calls that we’re getting and not us cold calling.”

Edwards said Local 2 of the Services Employees International Union has received calls from workers from “the entire gamut of cafes” in Halifax who have expressed interest in organizing.

He said he believes the high number of students in the city, which is home to six universities with a student body of more than 30,000, is probably a factor behind the recent unionization drive.

Shelby Kennedy, who has worked for more than a year at one of the Second Cup outlets in the midst of a union drive, said her interest in organizing stems from a desire to be afforded more rights, regardless of background.

“This is our livelihood, whether or not you are educated,” said the 21-year-old. “We just want to be treated with dignity and respect in our jobs.”