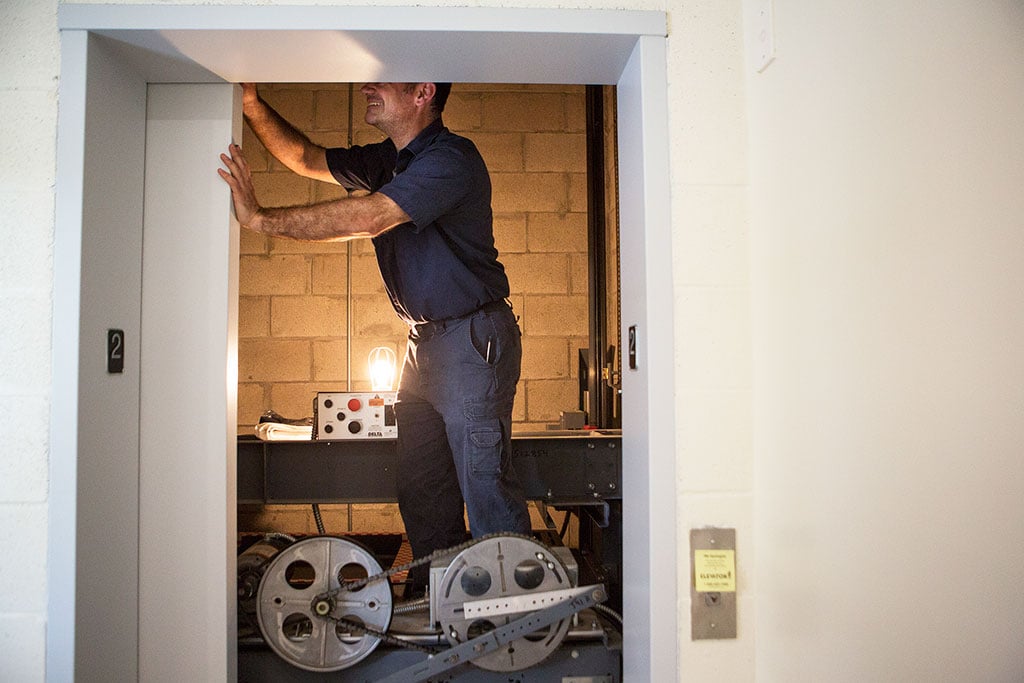 Joe Leone, an Elevator Technician with Elevator One, looks inside an elevator shaft while standing on top of the elevator during a routine elevator maintenance appointment. (Photograph by Della Rollins)

To save money, a condo superintendent in Barrie, Ont. recently conducted a do-it-yourself elevator job. “He saw what my hook looked like, then went out and made one himself,” says Joe Leone, the elevator mechanic for the building. When a resident dropped keys down the elevator shaft, the superintendent used a makeshift hook to pry open the door on the ground level, Leone says. Without killing the power, he climbed into the dark pit at the bottom of the shaft. The 1,200-kilogram elevator car hung just above his head.

Elevator maintenance, you would think it goes without saying, should be handled by the professionals. The machines are complex enough to have personalities, with multiple cars that sometimes dispatch seemingly at their own will, a mix of old and new technologies that make them stubborn to fix, and new flight speeds of 100 floors per minute. Elevator installers and repairers hold the top-ranked blue collar job according to Forbes, and demand rises with every new high rise hotel, office building, and condo complex in markets like Toronto and Vancouver.

However, as property owners try to cut costs, technicians report a dangerous lack of maintenance, and as multi-national elevator companies try to compete, some technicians rush through hundreds of maintenance jobs per month, reportedly with time limits as quick as seven minutes per visit. Politicians are pushing new policies, but still, increasing numbers of citizens are getting stuck inside elevators, stuck with dangerous ones, if not stuck with the stairs.

“There weren’t even little fingerprints on the inspection buttons,” Leone says of one job he took over after one building’s landlords fired the previous contractor. The top of the elevator car was covered in dust—“there weren’t even footprints in the dust,” he says. Leone, 41, works for a small, non-unionized company, Elevator 1. After a 720-hour apprenticeship, technicians like him earn around $50 per hour in their first year, plus overtime when they’re on call for emergencies, known as “trouble calls.” Since technicians today have as many as 200 units on their routes—five times as many as they did 30 years ago—overtime is common.

Elevator mechanic shot up the Canadian Business ranking of Canada’s Best Jobs in 2017, rising to No. 10 from No. 74 in 2016. That’s partly because wage growth started growing again after several lacklustre years. But the bigger factor is the overall growth in the number of jobs: over the last five years, the number of elevator mechanic jobs have grown 94% in Canada, one of the fastest growth rates observed. Boom times for the field can spell opportunity—but it has also put tremendous strain on employees.

“It’s kind of impossible to look after 150 or 200 elevators a month,” says a lot for the International Union of Elevator Constructors for British Columbia and Yukon. He says the four multinational companies: Schindler, Otis, Kone and ThyssenKrupp, have introduced time limits giving technicians down to seven minutes for each routine maintenance visit. “Seven minutes is hardly enough time to park your truck and say hi to the property manager,” he says. “You have GPS on your phones in the trucks. They say, ‘You gotta get 200 done. We know where you are.’”

A technician who worked with a multinational until last year, who only agreed to be quoted anonymously because he feared reprisal by his former employer, says that he would receive a minute-by-minute schedule on his phone each morning, telling him to spend 15 or 20 minutes on each location, with a GPS unit monitoring how long his truck was idling and how fast he drove. When the company reduced their site visits from 12 to eight per year, he asked, “what are you gonna do when the phones start ringing?” “I was told they’d deal with the one-offs. They weren’t expecting some barrage of calls.” Schindler, Kone and ThryssenKrupp did not respond to requests for comment on their scheduling practices. Otis spokesperson Jodi Hynes says, “we do not set arbitrary time limits.”

Yet, negligence has come out in court cases. In January, an Ontario judge fined Schindler $80,000 for safety violations in a hotel, where a supporting cable had snapped. In April, 87-year-old Kenneth Smookler sued Schindler after injuring his replaced knee. Smookler was headed to the pool in his Toronto condo building when he tripped out of the elevator because it didn’t stop level to the floor. He accused the company of “outrageous behavior in putting its pursuits of profits ahead of its duty to prevent the endangerment of the people,” and “bidding lower and lower for contracts in order to compete.” Schindler said the retiree was the “author of his own misfortune.”

Politicians have authored new legislation. Ontario introduced the Maintenance Control Program for Elevating Devices in 2014, telling mechanics exactly which tasks to perform each month, down to vacuuming the pit. Toronto Member of Parliament Han Dong has also introduced the Reliable Elevators Act, which mandates maintenance timelines and data collection on elevator traffic. The action comes after the Canadian Press reported that firefighters in Ontario received more than a dozen calls per day for elevator entrapments in 2015, almost double the number of incidents in 2001.

New types of trouble calls have emerged, too. Seniors often break buttons by jamming them with their canes, and their caretakers drop cutlery down the shaft when delivering trolleys of food, says Leone. Retractable dog leashes are too thin to be detected by the door sensor, and if the dog and owner get caught on different sides of the door, the leash could strangle the dog or dislocate the thumb of its owner. Contractors are also pressuring technicians to speed up the door action so they open and shut faster, even though the minimum closing time is supposed to be 3.5 seconds so the doors don’t hurt people.

Since apartment and condo buildings are tight for storage, Leone and his colleagues have found couches and vacuum cleaners in elevator rooms, where engines spin the cables up and down like high-voltage sewing machines. Leone’s colleague was also called to rescue a group of university students who had packed themselves into an elevator car, overloaded the car to the point where the system initiated an emergency shutdown, and then overheated so that one student passed out. The body heat was so intense, the technician could feel the heat through the steel roof when he freed them through the roof hatch.

Crises escalate when people trapped in elevators try to get free. One boyfriend trying to rescue his beloved kicked the hall-side elevator door off, leading to thousands of dollars in repairs, Leone recalls. In case of emergency, the safest place is inside the elevator, but Leone says, “people try all the time to escape.”

Technicians can’t escape the quick-changing technology of elevators. “Smart elevators” use algorithms to shuttle passengers more efficiently, and some technologies adjust the heat and air conditioning of office floors based on where people land. Meanwhile, technicians must also deal with elevators that date back to the 1930s, which can be unpredictable. Leone services an arena where the lift dispatches itself and zips between floors for no clear reason. People working in the building have nicknamed it “the ghost,” and Leone recently got a call reporting, “the Ghost is back.”

Back in Barrie, Leone checks on a one-year-old elevator to demonstrate how an ideal maintenance job should go: He climbs into the pit at the bottom of the shaft and replaces the pads that absorb dripping oil; he wipes the crud and cobwebs from the elevator’s bottom; he rests an ear against the door to listen to its mechanical innards; he straddles the door to ensure it nudges him out of the way properly. He logs one deficiency, a dead backup battery, and gets an apprentice to install a new one to ensure—at least in this condo building, at least for this month—the elevator is safe.

Clarification, June 20: This article previously stated that Kone didn’t offer comment. In fact, the company did offer a general comment but not regarding the time limits in mechanics’ schedules. Further, for elevator mechanics in Ontario, the minimum 720-hour portion of training is the in-school class time, not the apprenticeship.