Entrepreneurs get head starts on campus 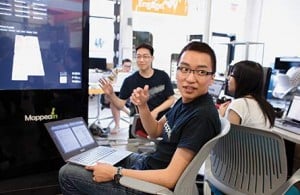 From our Future of Jobs report

Last year, Hongwei Liu, 22, dropped out of school. At first, he didn’t tell his parents. Until he took the leap, Liu was studying engineering at the University of Waterloo, but he found that more and more of his time was wrapped up in a non-academic challenge. GPS technology in cars, and Google Maps on cellphones, among other services, point lost travellers in the right direction. But, Liu says, no one had created a service to help people navigate the great indoors. Three years after he and his co-founders launched MappedIn, which now builds interactive maps and apps that replace clunky, static boards in shopping malls, Liu’s team has grown to 13 employees (median age 23) and is worth millions.

Liu is part of a generation of young entrepreneurs who, inspired by success stories like Facebook’s, which famously emerged from a Harvard dorm room, aren’t waiting to earn degrees before launching businesses. Some drop out while they build their businesses, others take an extra year to wrap up their degrees, and still others simply do both at the same time. According to a CIBC report, a record half a million Canadians were starting their own businesses last year. The trend is not due to a lack of other employment opportunities, noted the report, but a growing culture of individualism and new opportunities driven by technology. Young entrepreneurs are also benefiting from the dozens of business incubators popping up on university campuses across the country that hope to transform keener students into the next generation of Canada’s entrepreneurial elite.

MappedIn is based at VeloCity, a University of Waterloo-run incubator that’s now five years old. Mike Kirkup, VeloCity’s director, says the program launched in a university residence. The idea, says Kirkup, was to “create a dorm where we can jam in 70 wannabe entrepreneurs and see what happens.” The program outgrew the dorm, then outgrew its next cramped space in the repurposed Lang Tannery in downtown Kitchener, Ont. Eventually, the program occupied more than 7,000 sq. feet when it opened the VeloCity Garage in a larger space in the refurbished tannery complex.

The former tannery also hosts a regional Google office and another incubator, the Communitech Hub, which describes itself as “possibly the coolest place on Earth.” Among the Hub’s tenants is Pranav Madhikar, a co-founder of a fledgling start-up that hopes to create a collaborative online platform for students at the University of Waterloo. Madhikar, 22, graduated with a nanotechnology engineering degree in May. His partner, Mohamed Aborig, 22, expects to graduate with the same degree next year. Neither could wait to finish their studies before launching their business—and Madhikar, who begins graduate work in the fall semester, won’t let his business get in the way of further schooling, either.

Madhikar’s not sure if their idea will catch fire, but that’s no concern. “If this does fail, it’s a great learning experience for me and Mohamed,” says Madhikar. “And if it does work well, then we can make some money out of it. That’s basically our motivation.”

The Hub could give Madhikar and Aborig their big break. They recently applied—unsuccessfully, this time around—for a $4,000 grant from the centre, and plan to apply again in the future. Down the hall, the VeloCity Garage provides its own grants, including $300,000 worth of funding each year to 12 teams. Liu’s company won $25,000 in funding in November 2011. Kirkup says the program has a proven track record of funding businesses that continue to grow after taking home the cash.

Liu’s and Madhikar’s businesses are at very different stages, but they share an entrepreneurial spirit that incubators hope to capture. “There are students who are looking for more than an education,” says Kirkup. Not so long ago, building a software company took millions of dollars—but that’s no longer the case. “You really just need a laptop and time,” he says.

If you ask Liu, Waterloo’s community of youth-driven start-ups offers a more inspiring scene than other cities, including Toronto, a 75-minute drive to the east. “I feel like the Waterloo community, [with] most of the students coming out of engineering . . . it’s a community of doers, of making things and then talking about them,” he says. The Toronto scene, Liu adds, is full of entrepreneurs who might be ambitious, but are not as good at creating solutions.

Brennan McEachran might disagree with that assessment. He built his company, HitSend, at Ryerson University’s Digital Media Zone (DMZ), an incubator Ryerson opened in 2010 to help its students launch their own businesses. McEachran, 22, originally pitched a few ideas to Ryerson president Sheldon Levy in a late-night email. To his surprise, McEachran received a response from the president himself, offering to hear him out. At the ensuing meeting, the second-year student whipped out a mock-up of an online platform—then called StudentVoice—that would allow his classmates to share their own ideas with the school’s administration. He put the question to Levy: “Wouldn’t it be great if we could give every student at Ryerson the same opportunity you’re giving me right now?” The president was impressed.

Soon, McEachern found himself in the brand-new DMZ. That’s where he turned StudentVoice into SoapBox, a company that now employs nine people. “It’s a place for employees to go, or customers to go, add their ideas, voice their opinions . . . and eventually, they’ll get a response from the actual people at the company who can make difference,” he says.

McEachran, who ran web development businesses in high school and also dabbled in film, says he’s surrounded by ambitious students at the DMZ. “It’s not crazy to go to them and say, ‘I want to have a 200-person company in a couple of years,’ ” he says. “That’s the status quo.”

One of McEachran’s colleagues at the DMZ, Nathaniel Bagnell, 25, launched Physicalytics in November 2012. The company helps retailers learn about customers’ habits while they walk around stores. DMZ allowed Phyicalytics, which now counts five employees, to access real office space. “We were working out of a friend’s mom’s basement. She brings down oranges, and makes food or whatever for us,” he says. “It was great in the beginning, but we realized that, to get real professional exposure, we need to get out there, outside of the basement.”