Ever considered moving to Saskatchewan?

The boom has slowed, but the province is still growing 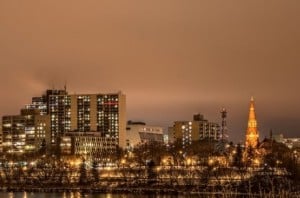 “When I was growing up, all I wanted to do was get out of here, but now that I’m back it’s like this is where I want to be,” he said.

Huber was born and raised in Regina. He moved to Vancouver when he was 24 for culinary school and worked around British Columbia, as well as in England.

But home was calling.

“I wanted to start a family and I wanted to basically start a restaurant.”

Huber and wife, Kristi, moved to Regina in 2007 — about the time Saskatchewan became the “it” province, the place to be in Canada.

People from every part of the country were flocking in. Statistics Canada figures showed at the time that Saskatchewan’s population growth in 2007-08 was the strongest since the early 1970s. For the first time, the province led the pack when it came to interprovincial migration.

Employment was strong and a booming economy — bolstered by potash, oil and gas — made Saskatchewan a rags-to-riches story.

“Unknown to me, the boom was happening while I was away. Immediately once I got back to Regina I realized there was a much different feel here in the province,” recalled Huber.

“It was an exciting time to be in Regina and Saskatchewan, for that matter.”

In 2008, it appeared the boom might be over. The recession dragged down economies around the globe.

Premier Brad Wall warned in March 2010 that Saskatchewan — the province that initially defied the economic downturn — would have to make tough decisions to balance its upcoming budget. The government was facing a challenge because of plummeting revenue from potash, a pink mineral used in fertilizer.

Resource prices are still soft and are affecting Saskatchewan’s bottom line. A budget update released in November noted a drop of more than $400 million in potash and oil revenue. However, the government is forecasting a small surplus and Wall is quick to note that Saskatchewan was the only province to present a balanced budget this year.

The premier said in a year-end interview with The Canadian Press that the recession forced the government to be more cautious with spending.

But he said there’s evidence that the land of living skies is still where people want to set down roots.

Census data released last February by Statistics Canada shows the population in the metropolitan area of Regina increased by eight per cent since the last census in 2006. Saskatoon, the largest city in the province, increased in numbers by 11.4 per cent.

“We can look at the number of people that continue to move here. We have 80,000 people over the last five years and we sort of pushed over some important records on population growth this year,” said Wall.

“We see investment. We see companies like Mosaic declaring their Canadian headquarters and moving 80 to 100 jobs here to the capital city.

Mosaic, one of the world’s leaders in potash crop nutrients, is to be the lead tenant in a new office tower that opened in Regina on Dec. 7. It’s the first new office tower in the capital in 20 years.

While there might be more office space, housing has been a problem since Saskatchewan’s economy took off.

Prices have soared since 2007 and rental units are in demand as more people move to the province. Regina, at one per cent, has the lowest vacancy rate of all major centres in Canada.

For the first time, a homeless shelter has been established in the city of Estevan, a hub of oil and gas activity in southeast Saskatchewan near the U.S. border.

“What we’re seeing is that folks are coming from all over the country and in some cases even from the United States. They seem to get the word that, OK ,there’s lots of jobs to be had in Estevan, but they’re not getting the word that there isn’t any short-term or affordable housing,” said Nickel.

“I shouldn’t say not that there isn’t, but it can’t keep up with the growing population.”

Brenna said the Salvation Army estimates as many as 15 people are sleeping in their cars each night and as many as 40 people could be sleeping outside or couch surfing.

“Most of these people are coming from a home in some way and are hoping to make a better start here and just don’t realize until they get here that it’ll be so hard to find some place to stay.”

Despite the housing challenges, reports suggest that Saskatchewan is on solid footing.

The Conference Board of Canada said in its provincial outlook for autumn 2012 that the western provinces remain in the best position to ride out the current global economic weakness.

It also said that for the most part, western Canadian provinces have been relatively shielded from the fiscal and economic troubles lingering in external markets. The economies of Saskatchewan and Alberta in particular have performed strongly, and their near-term prospects are more favourable than those for the rest of the country.

“There’s a quality of life here so if people come check out the province, they’ll know that there’s an excellent education system and in health care, we’re trying to make the improvements we need so that people aren’t on wait lists as long as they used to be.

Huber said the opportunity to open Jack Keaton’s, which is named for his two eldest children, a year ago was both “scary” and “exhilarating.”

Huber believes moving back and starting the restaurant were good decisions.

“People are optimistic about what the future holds here” he said.

“Years ago, it was quite the opposite. It was people were just depressed and, you know, ‘Nothing ever changes here.’ This was the last place in the world to get any great news.

“It’s very evident now that people are moving to the province instead of moving away.”