Get them where they live 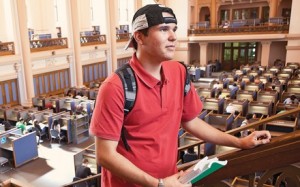 Ridge Cross-McComber is about as blasé as your average overachiever when it comes to his laundry list of goals for the next few years and beyond. He’ll finish his year at Montreal’s Dawson College, move to Vanier College for either nursing or pure and applied science, then go to medical school to become a surgeon. After that, he’ll practise medicine in Kahnawake, his hometown. “I want to be a role model for my community,” says the 17-year-old, sitting in a café in the native reserve near Montreal. “It’s something I want to do for my town and my people. I want to show that I can do this.”

As far as medical school goes, history and statistics are stacked against Cross-McComber. Wealthy students tend to be overrepresented in the field, for one. According to a study by the Association of Faculties of Medicine of Canada, nearly 45 per cent of medical students come from families making over $100,000 a year. (Only about 26 per cent of Canadian families are in this demographic, according to the AFMC study.) And while medical schools are decidedly less uniformly Caucasian than they used to be, the AFMC study indicates that many visible minorites continue to be under-represented.

McGill’s faculty of medicine wants the situation to change, starting with students like Cross-McComber. Last year, the faculty instituted “Towards Health,” a program aimed at actively recruiting from outside the traditional student pool. Towards Health is what is known as a pipeline program, in which the university recruits at underprivileged Montreal-area high schools in hopes of inspiring minds to come its way in the future.

The first change was symbolic: as of September 2010, the admissions office became known as the Office of Admissions, Equity and Diversity. The first—and controversial—move was to drop the Medical College Admission Test (MCAT)—a move that had more to do with attracting more francophone students, as the test isn’t offered in French. The first of its kind among Canadian medical schools, Towards Health has a similar approach to medicine as University of Winnipeg president Lloyd Axworthy has to post-secondary education in general: that most universities don’t do enough to recruit outside familiar waters and have thus become “bastions for those who have already made it and their offspring,” as Axworthy once put it. The faculties of law at both the University of Toronto and McGill have similar programs.

The Towards Health program began this past January, when 25 medical student volunteers visited the schools—including Kahnawake Survival School, Cross-McComber’s alma mater—twice a week to tutor, mentor and essentially sell the students on the idea that going to medical school is a possibility. Interested high school students are invited to McGill to watch surgeries and learn the rudiments of administering medicine (such as drawing blood) on medical dummies and animal cadavers.

“In a lot of cases the journey to medical school starts before one is born,” assistant dean of medicine Saleem Razack says of the typical medical student. “Often, kids can’t imagine that they can be health professionals. It means exposing them to that possibility.”

What Towards Health isn’t, admissions director Charmaine Lyn is quick to note, is an affirmative action program. “We’re not doing quotas, we’re widening the pool of people who apply and compete at a high level. It’s less about colour than money and access. In order to be admitted, so many things have to be in place. You need to have superb academics, support from peers, and family and professors who teach you that it’s okay to succeed academically.”

Aboriginal Canadians are practically non-existent in McGill medicine’s classrooms and labs; a recent report from the faculty determined that Aboriginals are under-represented 30-fold among its students—something that clearly irks Lyn, whose mother raised five children on her own. “McGill has a reputation in under-served communities,” Lyn continues. “We don’t recruit from [Montreal public high school] James Lyng as we do at [private school] Brébeuf or in Singapore. The students, teachers and the guidance counsellors know it. It’s hundreds of years of behaviour.” (Lyn found a similar situation at McGill’s faculty of law, where she instituted its diversity program in 2007.)

Lyn says the cost of medical school, particularly in Quebec, isn’t usually an obstacle. (At McGill as in other Quebec universities, government-mandated tuition averages about $5,580 per year.) In addition, the vast majority of Canada’s 17 medical faculties have reserved spots and financial assistance for Aboriginal students. (In McGill’s case, this is separate from the Towards Health program.) The trouble is getting those students into the classroom in the first place.

For Cross-McComber, the Towards Health tutoring program helped him achieve the grades that will help seed his medical career. “The math and science tutoring was beneficial to me,” he says. “I was willing to put in the time. I just wouldn’t have done as well academically.” Along with tutoring, he attended McGill’s lecture series and medical courses, donned scrubs to watch heart surgery and, notably, sutured a dead pig. He says simply having McGill students and representatives come to Kahnawake to tutor and give talks made all the difference, a sentiment echoed by Kahnawake educators themselves.

“The biggest difference was having them come here rather than us going to them,” says Nadine Montour, the post-secondary counsellor at the Kahnawake Education Center. “McGill is one of the first to do this, first with law and now with medicine. And they didn’t come back one or two times. They keep coming back.”