How to write cover letters that stand out 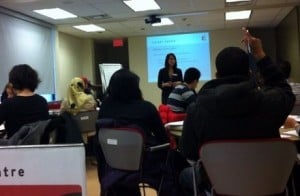 “How do you write a general cover letter?” asked a student during the brainstorming session of a cover letter workshop I attended last Friday at York University in Toronto.

Next question: “Okay then, how do I modify the general cover letter?” Cook’s patient answer: “Don’t use a template. Writing a new cover letter for each job is time consuming, but worth it.”

The basic fact that cover letters are the only chances we get to sell our biggest accomplishments, unique personalities and divine fits for particular jobs seemed lost on many of these students at the beginning of the workshop. But after 90 minutes with Cook, they sounded much more capable of writing targeted cover letters that will get picked out of the stacks. Students should make every effort to attend a workshop like this one before graduation. For those who can’t, here are seven cover letter tips I learned on Friday:

1. Write a new one for each employer.
Employers have told York’s Career Centre that many students submit applications that show no knowledge of their companies. The cover letter should draw connections between the applicants skills/experiences and what each employer specifically needs. If there’s a job posting, read it.

2. Specific examples help you stand out.

It’s not enough to list your skills. Use specific examples of situations where you were given tasks, show how you completed them successfully and give proof your actions benefited the organization. For example, don’t write, “I learned customer service skills as a shift manager at Second Cup.” Instead write: “As manager of Second Cup, I increased sales 10 per cent by developing friendly rapports with customers, encouraging customer loyalty by selling reloadable Second Cup cards, and asking each coffee-buying customer whether they’d like to add muffins to their orders.”

3. Less is often more.
Cook recommends including only two to four of the best reasons you should be considered for the job. This saves space to show off your personality. The cover letter shouldn’t exceed one page, including addresses, salutation, date and signature. The resume should be maximum two pages.

4. Mind the salutation.
“To whom it may concern,” is old-school. It’s better to address the cover letter to the person who is hiring. Put their full name, and don’t ever assume that “Chris” is a “Mr.” (Maclean’s Chris Johnson, a.k.a. Christine, can attest to this.) It’s okay to put “Dear hiring manager” if it’s unclear who’s hiring.

5. Don’t trust yourself as a proofreader.
Get someone with strong editing skills to look it over. Hint: try someone who works at a campus career centre. It’s difficult to see our own errors, but the employer will probably notice.

7. If you know an insider, say so.
Cook says it can be beneficial to mention in your cover letter that you know one of the employees and that they recommended you for the job. It’s just one more way to stand out from the stack.