'I didn’t go to law school to become an academic' 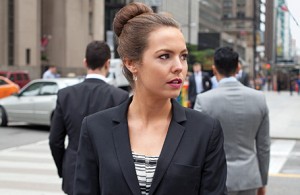 “Once you look at recruiting opportunities, you start to think, ‘Who’s going to pay me to practise international law?’”

Staring down a six-figure debt, she decided to explore her options on Bay Street, Canada’s corporate capital, where there’s plenty of work for young lawyers. To her surprise, the University of Toronto didn’t offer many ways to get business-law skills or test drive a corporate career. The school’s clinics, where students get credit and hands-on experience with clients, offered exposure to Aboriginal law, poverty law and family law, but—ironically for a school one subway stop from Bay Street—not business. “You learn to think in law school,” she says, “but you don’t learn how to practise as a lawyer.” Seeing a gap, she circulated a petition proposing a business-law clinic. About 200 students, a third of the class, signed within two days.

It’s not just U of T where law students worry about getting enough practical skills before their first substantial jobs. It’s a hot topic on the forum LawStudents.ca and at student parties.

“It is hard to imagine any law school in Canada where this conversation is not taking place,” says Michael Plaxton, an associate professor at the University of Saskatchewan’s College of Law. The discussion has put pressure on law schools to defend their position as providers of a broad theoretical education while also finding ways to meet demands for more hands-on skills. The good news is that they’re listening.

Even though Ben Alarie, an associate dean at the University of Toronto faculty of law, believes law school should provide a “broader intellectual context—social, political and economic—in which the work of lawyers naturally unfolds,” the school has listened to the petitioners and, this fall, a business-law clinic will open for the first time in about a decade. At the Innovation Law Clinic, students will work with lawyers assisting entrepreneurs, where they’ll pick up skills like drafting basic corporate agreements and employment contracts. In 2013-14, the school has, for the first time, enough clinics to guarantee placements to all students.

Experiential learning is also ramping up at York University’s Osgoode Hall. Associate dean James Stribopoulos says the motivation for their new “praxicums,” required as of 2015, is “to respond to the principal critique that’s been levelled at legal education in recent years that it has not been doing a fantastic job of preparing students for the reality of legal practice.” Praxicums (from the word praxis, the practising of an art or skill) will be credit courses that integrate theory with real-world client interaction at places like legal clinics, or classroom assignments that simulate what lawyers do day-to-day. Why the mix of simulation and placements? “The reality is there aren’t enough clinical opportunities, at the moment at least, for every student to deal with a real-life client.”

Osgoode has broadened its experiential learning opportunities in the past decade. Since 2006, all students must complete 40 hours of volunteer work “in the public interest,” sometimes for credit. Olivia Holzapfel, a third-year student, was lucky to get a for-credit placement at the Community and Legal Aid Services Programme, a Toronto legal clinic where she worked on low-income clients’ disability claims. Not only was it rewarding to deal with real people, it was one of the few times she got hands-on skills. She’s pleased with her school overall, but anxious about having enough experience after three years of courses that consisted mainly of textbook readings, lectures and high-stakes exams. “I didn’t come to Osgoode to learn how to be an academic,” she says. “I came here to learn how to be a lawyer.”

Holzapfel was forced to choose between the most practical classes, which fill up quickly. This fall, she was torn between giving her top ranking to trial advocacy, which teaches how to argue before courts, and legal drafting, where students learn to write contracts. (So far, she has only learned the theory of contracts.) She chose trial advocacy and got it, but would have liked both. Both seemed unlikely: there were 90 spots in trial advocacy and 119 requests. Legal drafting, which she didn’t bother requesting, had 75 spots and 121 requests. Courses that weren’t difficult to get into included electives such as environmental law (95 seats and 28 enrolled) and refugee law (80 seats and 20 enrolled). At the University of Toronto there’s a similar pattern: waiting lists for trial advocacy (64 requests for 60 seats) and advanced legal research and writing (161 requests for 125 spots), but plenty of space in environmental law (40 spots and 26 takers) and refugee law (only 13 of 25 spots filled).

Is it a bad thing that there is more demand for practical courses than available spots? Not necessarily, says Plaxton, the University of Saskatchewan professor. The optional courses are often there for students “who want to think more deeply about a particular field.” Some students, like him, don’t intend to practise. The problem he sees is a myopic focus on practicality. “The ‘theory’ taught is rarely at the sort of level one would get in other academic departments,” he explains. “With that in mind, I am often amused at the suggestion that law professors, as a group, are wandering about with their heads in the clouds, distracting their students from what is really important.” Plaxton suspects that what many students perceive as “too theoretical” is actually just hard work. “But,” he adds, “it is pointless teaching advocacy, interviewing and writing/drafting skills to people who don’t understand the substantive legal issues.”

Jeremy Martin, a 2011 U of T graduate who helps moderate LawStudents.ca, says students may appreciate all the classroom theory some day. Although he arrived at the Bay Street firm Cassels Brock & Blackwell two years ago with no idea how to do basic things like request a delay in a trial, he had a solid grounding in the philosophy of tort law, and quickly picked up the practical skills. A few more hands-on options would be nice, he says, but law schools must protect the theory. “When you consider the importance of the justice system,” he adds, “I think it’s really important that at some point in your career, rather than just being taught ‘here’s how you argue a case . . . make sure you file five copies of your trial record,’ you take the time to think deeply about what justice is.”

Sean Stevens, a partner at Toronto’s Fasken Martineau DuMoulin, hires about 10 law students annually, and his view might calm jittery nerves. “I think the role of the law school is to teach their students how to think like lawyers,” he says, “and frankly it’s our job to teach young lawyers how to do their jobs.”