In a class of their own 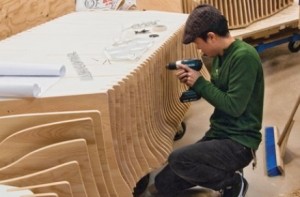 Parents have a tendency to dream on behalf of their children. Sometimes they envision their daughters and sons climbing the hallowed staircases of ivory tower institutions. Sometimes they’re graduating from law school, leaping headlong into medical school, or simply training to take over the family business. There’s no doubt such dreams have merit, but they don’t always mesh with what kids want. Canadian universities offer a staggering array of enticing programs in which students can pursue their own destinies and determine their own dreams. Here are a few standouts:

As part of TRU’s popular bachelor of tourism management program, students can choose to major in adventure studies. Yes, it is as awesome as it sounds. During their first two years, 60 per cent of the program’s courses involve “field trips,” including heli-skiing, ice climbing, white-water kayaking, and mountaineering. Students can even receive Canadian Mountain and Ski Guide certification through the department. In their third and fourth years, adventure studies students are taught marketing and management skills, as well as the principles of ecotourism. And every year, students travel to the town of Camina in northern Chile—where the school has helped set up an adventure tourism outpost in the Andes—to develop marketing strategies and plot out hiking routes.

UBC’s bachelor of science in wood products processing is like woodworking class—on steroids. The award-winning program (described as one of UBC’s “best kept secrets”) bills itself as a “fusion of science, engineering and business.” Students learn the technical and theoretical skills needed to design and build everything from house frames to avant-garde furniture. Those enrolled in the program get the benefit of working at UBC’s Centre for Advanced Wood Processing, where students have access to state-of-the-art computer design software. A group based at the Centre, which included students from the program, used this equipment to design and build the podiums for the 2010 Vancouver Olympics. The program also includes a co-op: paid placements of up to 20 months, some of which can take them as far as Santiago, Chile.

Some engineers design bridges and railroads. Others specialize in sewage pumps. But at York University, they can shoot for the stars. Students of the school’s space engineering program are taught how to design and manage satellite communications systems, and work to contribute to the design of the next generation of space-faring vessels. Courses range from physics and algebra to orbital mechanics and mission design. Students can track real spacecraft from the Algonquin Radio Observatory, and have the option to complete a paid work placement of up to 16 months between their third and fourth years. The faculty has been involved in renowned space missions, including the deployment of the Phoenix Mars Lander, which arrived at the Red Planet in May 2008.

As a branch of its computer sciences program, Sault Ste. Marie’s Algoma University offers a four-year degree specialization in computer games technology. Students study computer science programs like data structures and programming, as well as artificial intelligence in computer games and computer game design. The university also houses the Algoma Games for Health studio, where students are creating video games that can help rehabilitate those with injuries and health problems. (eVoxative Speech Therapy, for example, helps stroke victims recover their speech.) Students can also work on their projects at the Sault Ste. Marie Innovation Centre, which brings in leading experts from the gaming industry to speak to students and run workshops.

Obsessed with the Greeks? The Stavros Niarchos Foundation Centre for Hellenic Studies at SFU offers undergraduate and graduate degrees that focus on various aspects of Greek history, language and culture. Teachings range from the ancient musings of Plato and Aristotle, and the rise and fall of the Ottoman Empire, to the history of 20th-century Greece. The Centre for Hellenic Studies has also created an online Greek language tool called Odysseas. More than 4,500 people have downloaded its iPhone application, while a tablet app is in the works. As an added program perk, students can take a semester on the Greek island of Kefalonia, where they learn how to conduct archaeological digs at an excavation site in a 2,500-year-old cemetery.

The University of Waterloo’s School of Planning is an inter-disciplinary program that applies elements of ecology, law, economics, politics, sociology and geography to urban planning. It’s the only Canadian program of its kind to take in students at the undergraduate, graduate and post-doctoral levels, and it’s been recognized as the best urban planning program for its emphasis on incorporating principles of environmental sustainability into the curriculum. Planning advertises itself as a “professional program,” meaning there’s a heavy emphasis on providing the hard skills needed to land a job after graduation. Every year, the school hosts the Pragma Council, a forum for industry experts and business, education and government leaders to discuss contemporary issues in urban and community planning. The school also selects a prominent member of the planning community to conduct student seminars as “planner in residence.”

In the age of the image, visual media reign supreme. The film studies program at Ryerson University aims to place its students in the thick of it. The program, part of the university’s School of Image Arts, offers courses in writing for film, directing, cinematography, production and editing. And every year, students at the downtown Toronto-based school can take advantage of the school’s proximity to the Toronto International Film Festival (TIFF). This year, 50 TIFF films were screened at the Ryerson Theatre, and four films made by students and alumni were showcased in the festival. Ryerson also houses a basement area known as “the cage,” where students can sign out video equipment and use studio space—at any hour—free of charge.

One-of-a-kind in North America, Dalhousie’s four-year honours B.A. in costume studies attracts students from all across Canada and the United States. The program teaches the principles of textile fabrication, costume technology, as well as pattern design from 1680 to today, and explores clothing’s impact on our cultural identity. Students also do extensive research on historical attire—think knickers during the Industrial Revolution—to help them accurately recreate pieces for film and theatre productions. Many graduates go on to create costumes for movies, plays and living history museums.

Have an extra credit or two you need to fill? Consider one of these au courant classes.

This course, open to English students, traces the history of the poetic form and rhetoric of rap lyrics. It’s the shizzle.

Taught in three-hour lectures, this course focuses on the portrayal of vampires as eternally young, sophisticated objects of intense desire in 21st-century media.

Reaching back to the pre-colonial physical activities of Aboriginal peoples, this course aims to teach about the rise of modern sports culture through the evolution of gender, class and race identities in Canada.