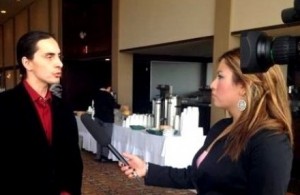 “There were two Native journalists in the class [and] one of them did a story about a Native woman who was beaten up,” he says. When someone explained that the Native woman had been called a squaw, some students in the back of the class started laughing. He walked out.

He was also offended when a professor told him First Nation stories weren’t “newsy” enough.

Another time, he asked peers to help cover a story about the Assembly of First Nation Chiefs in New Brunswick’s plan to address poverty. No one showed up, he says, “as breaking and important as it was.” Molley says he felt ostracized, but he hasn’t given up on his chosen profession.

Despite challenges like accessibility and racism, Indigenous students are graduating and working as journalists. Exactly how many is unknown, but mediaINDIGENA.com, an online magazine, recently counted more than 60 working Indigenous journalists in Canada.

Indigenous journalism school graduates say they often feel forced to be the teacher. “I was surprised by the lack of knowledge students had about First Nation issues,” says Ntawnis Elyse Piapot, of the Piapot First Nation in Saskatchewan. She finished her degree at the University of Regina in 2012 and is now a reporter with APTN in Winnipeg, Man. “I did my best to educate them on the issues,” she says, “but it’s not my job to do an Aboriginal 101 with every class.”

Teevi MacKay, from Iqaluit, Nunavut, is a graduate of Carleton University’s journalism program in Ottawa. She can relate. “I get the feeling, in smaller classes, students and perhaps profs have the expectation that I should speak up when an Aboriginal issue is discussed,” she says. “It creates a bit of discomfort on my part because I feel like, if I don’t say anything, I’m letting [them] down.”

Ivor Shapiro, Chair of the School of Journalism at Ryerson University in Toronto, says discussions about diversity can be awkward but also extremely enlightening—if done right. As a non-Indigenous person, he can only imagine what Indigenous students must be thinking. “Am I learning how to be a journalist just like everybody else or am I supposed to be the exemplar or am I supposed to be the voice of the voiceless?,” he says. “What exactly are you expecting me to do in this position?”

Some places are less awkward for Indigenous students than others. For 30 years, the Indian Communication Arts (INCA) program at the First Nations University of Canada in Regina, Sask. has trained quality journalists like Merelda Fiddler of CBC Saskatchewan, Kerry Benjoe of Regina’s Leader-Post and Nelson Bird of CTV’s Indigenous Circle. Over the course of the program, up to 30 Indigenous journalists, writers, broadcasters and technicians are brought into the classroom.

Piapot completed the INCA program before heading to the University of Regina. There are vast differences between the two, she says. “You can walk up to the [INCA] building in the summertime and smell the sweet-grass,” she says. “The Cree culture is incorporated in the way that they teach.”

For the past several years, similar work has been underway in London, Ont at Western University, where Dan and Mary Lou Smoke teach the half-credit course Representation of Indigenous Issues in the Mainstream and Alternative Media. “Every class we begin with a purification smudging ceremony, a drum song,” says Dan, a member of the Seneca Nation of the Iroquois Confederacy.

One of their biggest classroom discussions surrounds a famous photo of Waneek Horn-Miller. The Mohawk woman fronted Time magazine ahead of the 2000 Olympics, when she was captain of the Canadian water polo team, and posed naked holding a ball. “Most of the students thought she was denigrating the Native women and others thought she was a proud representation,” he says. “We looked at why the students felt both reactions. It was a good discussion.”

Valerie Martin, a Mohawk student from Six Nations, studies at Wilfrid Laurier University in Brantford, Ont. where she says she hasn’t experienced racism, “maybe because Brantford is so close to the reserve.” But she does see a challenge: it’s common for reporters to avoid Indigenous communities.

Duncan McCue, a member of Ontario’s Georgina Island First Nation and a reporter for the CBC, is working to change that through his course Reporting in Indigenous Communities (RIIC) at the University of British Columbia’s School of Journalism. Jacqueline Ronson, who took RIIC, says she has brought its lessons to Whitehorse where she regularly reports on Aboriginal communities.

Molley hopes courses like that are some day offered in all journalism schools. Despite the challenges, he continues to believe in the profession. He is now spearheading the environmental media program at activist Winona LaDuke’s Honor the Earth organization in Minnesota. “Being a journalist, not only are you standing up for the people,” he says, “it is also a form of justice.”

Martha Troian is a freelance reporter based in Halifax, N.S.