Is film school for suckers?

Job prospects are dismal, but applications keep going up 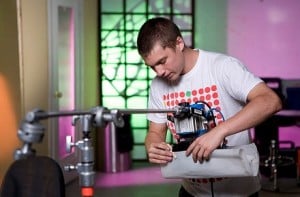 Film students are often the butt of jokes about never being able to find a job. Yet this hasn’t deterred people from applying, even now, when job prospects are as dismal as ever.

The number of students taking on film and television majors has skyrocketed in the U.S. The University of Southern California’s School of Cinematic Arts — which only accepts 300 students each term — saw applications jump from 2,800 to 4,800 in a single year, writes the New York Times.

It’s a similar situation in Canada. Since 2006, the prestigious Vancouver Film School has had nearly 8,000 applicants for its 13 programs. The University of British Columbia says it gets an average of 75 applicants annually for a mere 20 spots in its film production program. And get this — York University in Toronto gets up to 17 applicants per spot for its film programs.

But a weak economy has caused many studios and production companies to scale back on staff. “It’s becoming an increasingly flooded marketplace,” Andrew Dahm, who holds a masters degree from U.S.C., told the Times. “Working as an assistant for six years is not unheard of.”

The shallow pool of film-related job postings online reveals a shortage here too. Many job titles applicable to a film graduates have no postings at all. Of the two postings under “video editor” on Workopolis.com, one was for an unnamed company editing wedding footage. A search of the word ‘film’ on Monster.ca brings up only five positions, one of which is an unpaid internship. True, these sites only represent a fraction of jobs, but it’s discouraging nonetheless.

Still, some film educators are optimistic about their students’ futures —  just not in film.

“[The] majority of students majoring in film and television will not be having careers in those professions,” Stephen Ujlaki, Dean of Loyola Marymount’s School of Film and Television, told the New York Times. But film training leaves students with business savvy and other skills, he says.

As a student working on a film minor at the University of Manitoba, I have evidence that he’s right. As much flack as I’ve gotten from friends about my capricious minor, film training has proven to be an asset when applying for jobs in another field — journalism. Nearly every publication seems to want to expand its multimedia content and one of those publications, a newspaper, hired me this summer. The time management, organization and communication required on film sets apply to many other jobs

So, it may be true that most film school graduates aren’t going to work on big budget blockbusters or screen their films at Sundance. But that shouldn’t discourage those who truly love film from pursuing a degree in the field. Their time will not be wasted. I can personally attest to that.