Is the value of a degree declining?

In the U.S., degrees are worth more than ever 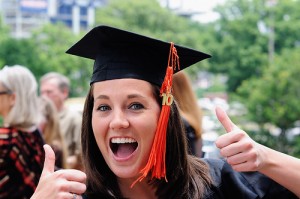 An article in The New Republic by Kevin Carey starts off with this paragraph.

Sally Cameron thought she had done everything right. After studying French and Arabic at a tony liberal arts college, she knew that graduate school would help her career chances. But when she hit the job market, her Ivy League management degree didn’t seem to matter. The worst recession in decades had pushed the unemployment rate to nearly 10 percent and good jobs were scarce. Sally paid the rent by tending bar and filled her time with volunteer work.

Then, Carey reveals that Cameron graduated in 1980 and that her story was first published in the Washington Post in 1982. His point is that the anecdote could have started off any one of the many recent stories about how students can’t find jobs after graduation.

Worse, he argues that journalists get the story wrong every time — all of them suggest that the value of degrees has declined. In 1976, Harvard University economist Richard Freeman predicted in The Overeducated American that the ever-increasing number of graduates would exert downward pressure on their wages.

In fact, the opposite has proven true. The inflation-adjusted wages of bachelor degree holders in the U.S. grew 34 per cent between 1983 and 2008 and the wages of graduate degree holders grew 55 per cent, despite multiple recessions. Meanwhile, high school dropouts’ wages fell by two per cent over the same period. Carey also points out that despite higher than usual unemployment, graduates were the only members of the U.S. work force whose employment rate has fallen each month since January.