It's a rough time to be a Bachelor of Fine Arts 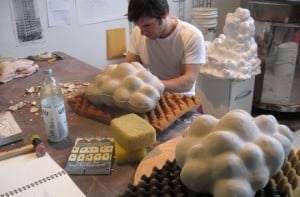 But there’s another part of her that wishes she’d taken something more focused, like photography or design, perhaps. Had she done that, who knows where she’d be?

McKenzie had planned to become an art teacher after her BFA. She was even accepted to a teacher’s college, but deferred it. She’s very glad she did. At least a quarter of her art school colleagues went on to teacher’s college. Many can’t find jobs. In fact, two-thirds of new teaching graduates in Ontario can’t find work as teachers.

Instead, McKenzie spent the first part of her career working in a long-term care home. She liked the job. But apart from leading weekly art therapy sessions, it didn’t have much to do with Fine Arts.

Historically, McKenzie is nothing special. The stereotype is of the starving artist, not the gainfully employed artist. Fine Arts students have always struggled with the fact that their education is supposed to be about exploring high culture, while still fully aware they’ll need to find paying work.

But what was once tension has become plain old fear post-recession. Recent Fine Arts graduates are faring worse than other grads in the job market. Fine Arts programs are shrinking as a result.

Queen’s University shocked the art community when it suspended its Bachelor of Fine Arts in November. The University of Windsor felt compelled to consolidate its Fine Arts and music schools this year, perhaps in reaction to the fact that applications for BFAs fell from 280 in 2006 to 149 in 2010. In Halifax, NSCAD University has undergone a review that has at least some alumni convinced that it’s under threat, in part because of $19-million in debt. The report may be released today.

It’s a similar situation across the western world, as taxpayer funding for universities is squeezing them like never before. It’s partly because Fine Arts programs are easy targets. They’re small, making course development and delivery relatively expensive on a per-student basis.

They’re also easy targets because interest is waning. Ontario high school student applications to Fine Arts programs were down 4.7 per cent in 2011 while overall applications rose two per cent.

No doubt students are less interested, in part, because of the scarcity of high-paying jobs. They hear from parents and teachers who encourage them to take job-ready degrees and diplomas.

Their parents’ concerns are well-founded. Ontario’s recent graduate survey, which assessed how 2008 bachelor degree graduates were doing two years later, showed that wages are stagnant overall, $49,469, which is much the same as 2005 grads made two years after their convocations.

But instead of stagnation, Fine Arts graduates saw a big drop in salaries—to $34,460 on average—which is a painful $2,500-a-year less than their 2005 counterparts were making in 2007. And things were even worse in the immediate post-grad period. Six months after grad, the average university degree-holder reported a salary of $42,904. Fine arts students were averaging $28,736.

But not everywhere has seen falling interest, like so many schools in Ontario. The University of British Columbia’s enrollment in BFAs grew unabated each year from 154 in 2004 to 254 in 2011.

Sheila Petty, the Dean of the Faculty of Fine Arts at Regina, explains why her numbers aren’t dropping like they are in Ontario. It’s because she recognizes that Fine Arts needs to adapt.

“The traditional model of Fine Arts, even the definition of Fine Arts is an old model and it can’t hold any longer,” says Petty. “In the short term, the traditional framework for Fine Arts will collapse. Governments and university administrations can no longer afford to fund expensive programs that educate a few students.”

That’s a candid statement for an administrator, but Petty is confident her programs will survive. Even before the current campus-wide search for inefficiencies got under way at Regina, Petty was making her programs more viable, while making sure students will still meet industry standards.

She’s doing it by allowing BFA students to do more non-art courses, by forging strong links with the journalism program, by creating a minor in business and by making the new Master’s degree interdisciplinary, rather than narrowly-focused. The faculty is also offering more courses that non-artists want to take, like television, to boost the numbers taught by the Fine Arts faculty.

Another way the program is staying viable is through their Professional Placement internships. Students earn up to 15 credit hours at places like Saskatchewan Youth Ballet, Mind’s Eye Entertainment, local galleries and in government. Not only does that give them the confidence and skills they’ll need for the workplace, but the school saves on classroom space and professor time.

And in recognition that students have to be more “entrepreneurial” these days, Petty’s faculty created a minor in Art Administration that teaches students how to market their work. If business courses and internships seem like a departure from the traditional BFA, that’s because they are.

But those are exactly the types of applied skills McKenzie says wishes she’d been encouraged to practice while at York. They’re the type of skills that may also have helped with her latest stab at making a living. She’s currently building a cake decorating business, the cocoa cakery.

It’s working—but thanks more to her entrepreneurial spirit than her Bachelor of Fine Arts. “People say there are no jobs out there,” says McKenzie, “but you wouldn’t believe how busy I am.”