Why master of journalism degrees are big news in 2011 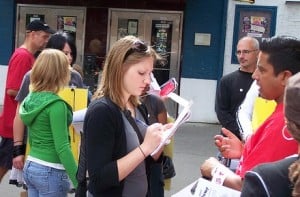 Carmen Smith used to think she didn’t need graduate school. And why would she? Even before finishing her bachelor of journalism degree at Bennett College in Greensboro, N.C., Smith was the publisher of a women’s magazine called Belle, which she founded.

But she changed her mind after an academic adviser told her about a new master’s in journalism program offered at King’s College in Halifax that could help her do better with her own publication. “I really thought it was interesting to see how they were developing their program around entrepreneurial journalism,” Smith recalls. “That’s why I came.”

Smith, now 22, is one of a growing number of wannabe journalists heading to master’s programs in Canada. Before 2000, there were only two degrees available in the country, at Carleton University and the University of Western Ontario. Today, there are six, with the University of Toronto’s Munk School of Global Affairs and Wilfrid Laurier University both gearing up their own programs.

It might seem a strange time to expand graduate journalism programs, as advertisers move online and newsrooms shrink. Some educators admit many students won’t find jobs. “There is no way there are enough jobs for every single person who is graduating,” says Janice Neil, editor-in-chief of journalism industry publication J-Source and director of Ryerson University’s journalism school.

But even if a master’s doesn’t lead to a job, much of its value lies in access to internships that give students contacts in the industry, according to Neil. Program directors also say master’s degrees prepare students for the future. For Robert Steiner, the Munk School’s program director, that means graduates need to be comfortable freelancing and selling their work all over the world. “If you’re only working in your local market, you will make $5,000 a year,” he says. Meanwhile, the program at King’s teaches students how to use social media to proliferate their work online, as well as how to turn a profit in the ever-changing media environment. “The future of journalism is in new ventures, in new media outlets that are being created, and also in self-employment,” says program director Kelly Toughill. “Understanding how the business models are changing is very important for the next generation of journalists.”

Still, some question whether a master’s degree beats out experience. There are no professional requirements to become a journalist, after all. “It is still a market that is dictated by talent and access,” says Neil. Jeff Gaulin, who runs a journalism job board website out of Calgary, says the rise in graduate programs is part of a wider trend toward “increased professionalization” of education. “As positions become more competitive, it’s one point of differentiation,” says Gaulin. Neil calls it “credential creep.”

Robert Steiner agrees that a master’s in journalism is not a professional certification. Journalism, says Steiner, is “not like medicine or law, or even an M.B.A. What is far more important is the combination of experience and the sort of critical mind.”

Peter Klein says thinking is what an M.J. is all about. As director of the graduate program at the University of British Columbia, his master’s students are taught to critically reflect on the nature of journalism and issues pertaining to the industry. “There’s not a lot of time for philosophizing in the newsroom,” Klein says. “This is a great place to have pie-in-the-sky ideas.”

With a growing number of master’s programs for careers in a struggling trade with questionable job prospects, at least there’s still room to provide the age-old academic privilege to stop and think.

New M.J. programs are in the works at Wilfrid Laurier and the University of Toronto’s Munk School of Global Affairs, but for now, here’s what’s out there for prospective masters of the trade:

The University of Western Ontario: A one-year degree that offers a balance of technical training and journalism theory, and includes a mandatory one-month internship.

Ryerson University: This two-year program is catered toward people with no journalism degree and relatively little experience. It focuses on training “urban journalists” to possess the technical skills and knowledge to report on the complexities of modern urban society.

Carleton University: Carleton has two M.J. streams: a two-year program for non-journalists, and a one-year for either experienced journalists or those with degrees in the field. Both streams mix practical skills with academic theory.

Concordia University: This two-year program is not meant for students seeking professional training as journalists. Rather, it focuses on theoretical analysis of journalism trends and the research methods of journalism.

University of King’s College: A one-year program with two streams: new ventures in journalism and investigative reporting. It’s designed either for practising journalists or those with undergraduate degrees in the field.