Maclean’s interns reveal how they chose to stand out this year: by standing up at their desks 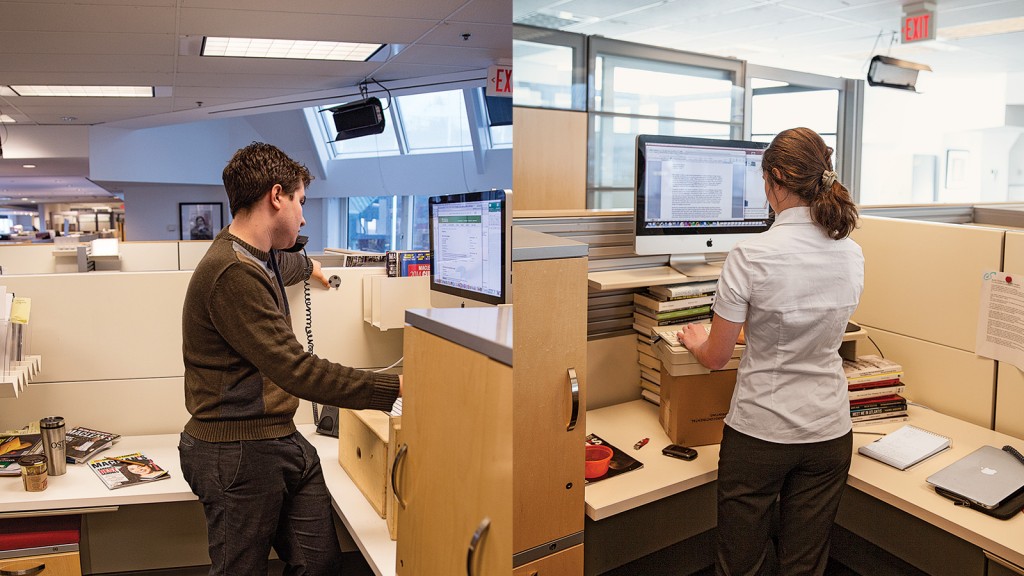 Meagan Campbell: I arrived at my desk on my first day to find that the previous intern had left me a gift: a diagram, taped beside my computer, of a sickly human slumped over a keyboard. Its organs were crippled; its lungs were collapsed and eyes buggy. The graphic, annotated with such horrors as “mushy abs” and “soft bones,” was topped with a headline: “Don’t just sit there!”

Zane Schwartz: The other interns and I had surrounded the diagram with four desk lamps and paired it with a Ted Rogers biography, along with a sticky note saying: “Read both by end of day, quiz tomorrow at 9 a.m.” We were hoping for an ominous vibe, but even at the time, it felt a little silly. Hey, we were a bunch of nerds hazing a new intern for the first time.

Meagan: By day two, I was up. I wasn’t in the right tax bracket to buy a proper standing desk—those adjustable contraptions with prices as high as their fully extended legs—nor was I ready to haul in a new piece of furniture before I even had an access pass to the building. I’d like to call my creation a standing desk, but it looks more like a 20-layer cake made of books with an Apple on top. It occurred to me that it might look odd, but I decided to take validation from the lyrics of Eminem: “I’m not afraid to take a stand” certainly leaves room for ergonomic innuendo.

Zane: It looked odd. Not as odd as three-foot-nothing Meg rapping Eminem and swaggering while she typed, but still odd.

Meagan: As I checked my email each day, I could see my pod mate, Zane, checking out my desk, not with guilt or inspiration, but rather the restlessness of a toddler who doesn’t want to sit in the seat of the grocery cart when his sister gets to ride in the back.

Zane: Okay, I’ll admit it. It looked cool. Also, Meg seemed super comfortable, and I did a bit of research on the science behind her madness. The American Cancer Society tracked 123,000 people from 1992 to 2006 and found a higher death rate among those who sat for six hours or more, and according to another study, standing could increase my productivity by 10 per cent. That scared me straight into standing. I used these stats to explain to people why standing desks are increasingly common and, based on the reactions, it worked really well. As people swung by to talk about our desks, responses ranged from positive—“I don’t know what you think the big idea is, but I don’t like it”—to glowing: “I always think you’re looking at me when I walk by. It’s creepy.”

Meagan: We did have some supporters. The next to stand was a senior editor. Her pod mates, those bullies, called her a follower, but her greater concern was that everyone could see her screen. One solution would have been to frizz her hair to create a natural wall of privacy. Instead, she realized that with most people sitting, and with quiet hallways around her, she was actually at a level with less eye traffic. By week seven, another writer, just back from maternity leave, started standing as well.

Zane: At this point, some staff took a stand against our stand. One of the investigative reporters snapped a photo of the two of us momentarily sitting, then sent it out to the newsroom with the subject line “quitters.” A few days later, a senior writer offered this encouragement at the story meeting in front of all our colleagues: “You know who else stands? Veal.” We tried not to think about how replaceable interns are, and what might have happened to the ones before us.

Meagan: Amid the laughter, Zane and I jumped up from our chairs to object.

Zane: Despite the thinly veiled threats, we try to stay positive. We’ve had a number of secret conversations with people who are considering standing. They’re not ready yet, but maybe one day Maclean’s will rise up.

Zane Schwartz, a University of Toronto grad and former editor of The Varsity, and Meagan Campbell, a journalism student from the University of King’s College in Halifax, are working at Maclean’s on one-year contracts.