What it's like to work at Maple Leaf Sports & Entertainment 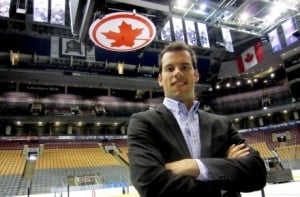 Your Job Makes Me Jealous is an interview with a young Canadian whose career is so cool that people at parties crowd around to hear about it. We discuss the ups, the downs and the pay.

This week, Mike Thompson, a 25-year-old from Oshawa, Ont., talks about his job as coordinator of fan services at Maple Leaf Sports and Entertainment, based at the Air Canada Centre in Toronto. It’s his job to oversee customer service at events from Raptors basketball games to last week’s Barbra Streisand show. When something goes wrong, he’s the one who makes it right.

Thompson holds a Bachelor of Commerce and a Master of Human Kinetics in sport management from the University of Windsor. He’s worked with MLSE since 2010. The hours are long, the pay is fair ($45,000 to $55,000 per year), but he can’t imagine doing anything else.

Click to listen to Mike Thompson talk about his job as coordinator of fan services at MLSE.

When you were growing up, did you play a lot of sports? Did you have dreams of one day maybe playing professionally?

Absolutely. I think I was born with skates on. I like to say it that way just because I started skating at three years old. Loved hockey, loved baseball, loved ball hockey.

When did you realize that sports could be your career?

And I realized that sports really is my passion—love hockey, love baseball, you know, into just about any sport there is—and realized that if I’m not going to play in the NHL I’d like to work in the league.

I ended up landing a position with the Toronto Blue Jays and I’d say that was kind of my “wow” moment when I realized I was working in the communications department there, around sports, around the ball park that this is exactly what I wanted to do and pursued it from there.

What type of person is well-suited to this type of work?

I would definitely that say you’ve got to bring personality to it, you’ve got to bring the passion that says, you know, I want to be here, because it does come with a lot of hours sometimes in professional sport and you’ve got to be willing to put the effort out there because usually if you’re not, there’s somebody knocking on the door that would be happy to give it a shot.

It really depends on the day. If it is an event day, you’re going to come in at 9 o’clock most days and if you’re here through to a Leafs game, prepping for a Leafs game on a Wedensday night or a Thursday night, you may be here till the end of the night. Leafs games tend to end around 9:40, so it could be 12- to 16-hour days sometimes, but again that’s not something I really stress about or worry about because I love my job, it’s something I’m really passionate about I don’t really count the hours.

Are there any parts of your job that you don’t enjoy?

I can say in fan services that there are some tough days where, you know, we just had a concert, a big event with potentially a high ticket price and fans come out with big expectations, as they should, and we look to deliver absolute top-notch service, and sometimes we do slip up and it will fall to the plate of fan services to dig into these stories if fans are complaining and it can be stressful and you know, sometimes they aren’t just one-offs, sometimes you could have an argument or a fight in the stands or on the floor of a concert and it affects a number of people around there. You wake up knowing that they’re going to call in.

Are there any particularly good days on the job that stand out for you?

When it comes to that small experience or that day that I remember, there was a particular Leafs game where we had a terminally ill fan, a young guy, about six years old, unfortunately had cancer, really liked the Leafs and wanted to meet one. In fan services you’re able to create those moments for fans. We picked him up in the gates, he came in a limo, his family was making a big deal of it and we were able to contribute to the evening by giving him an autographed puck, a certificate to commemorate the night of the game, bring him down and he’s bumping fists with Kessel, Phaneuf, Reimer and it’s great when the parents are very thankful for that, and they sent us an email afterward and said here’s pictures from the event, our son has greatly appreciated what you’ve done for us—just creating those moments.