Seven internships. No job. So what? 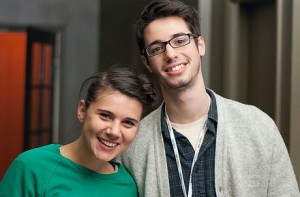 Diana Wang, a university graduate from Ohio, is suing Harper’s Bazaar after her dream internship with the fashion magazine turned into a nightmare.

Wang’s bosses wanted her free labour for at least 10 hours daily. Worse, a mean superior falsely accused her of not sending some hats to a photo shoot in Europe, she told CBC’s The Current.

Needless to say Wang didn’t realize her childhood goal of becoming a fashion writer in New York City. Her other six internships didn’t get her much farther. She went on to work at a call centre far from NYC. Suffice it to say, she’s pissed.

Yes, the hours were long and yes, people occasionally blamed me for their mistakes, but I would do it all again. Internships taught me things that university never could. (And not just that you sometimes need to work long hours at low pay or that people will occasionally blame you unfairly.)

Here’s my story. In my first year of journalism school at the University of British Columbia, I applied to ten summer internships. I got one interview, caught a red-eye flight east to Toronto and borrowed a navy-blue suit jacket that was two sizes too big. I felt very self-conscious as I sat in the waiting room of Toronto Life while models from Fashion magazine’s nearby office gave me cut-eye.

But my clothes didn’t matter. I had been reading Toronto Life cover-to-cover for months and my knowledge impressed the editors. They hired me for 35 hours per week with a $125 weekly honorarium. I fact-checked and wrote web hits by day. I researched potential print stories by night.

It was, at first, intimidating. Veronica “Ronnie” Maddocks, Queen of the Toronto Life Interns, sat at the centre of the big U-shaped desk while I and another intern, Matthew, each took up a couple square feet at the tips of the U. If I tripped over a word when calling someone to fact-check, I’d see Ronnie’s spine stiffen. When I recovered the call, she’d relax again. I’d feel rather relieved.

I also learned about pitching. At the first story meeting I attended, I thought I had a good one—something exciting and exclusive. All of the information I’d practiced tumbled out. Then, silence, as I waited for a response. The editor didn’t look up. Instead, a sigh. “Anyone else?”

I also learned that writers often have to eat lunches at theirs desk to avoid missing important calls.

Most important, I experienced the excitement of when the magazine arrives from the printers, you open the box, flip through a fresh copy, and see your name in ink above a story that you wrote.

My summer at Toronto Life was followed by a stint at CBC Television in Vancouver during the Olympic Winter Games. I learned chase production and met B-list stars; one is still a friend today.

Two months later, I was at CBC National Radio in Toronto working eight-hour unpaid shifts that started each morning at 4:00 a.m. That’s where I learned that radio is a lot easier than TV.

The Globe and Mail Vancouver bureau over the Christmas holiday in ’09 was great fun. I learned that just about anyone is willing to talk to you when you say you’re calling from The Globe.

Then came Maclean’s exactly two years ago. I was out on the streets covering the G20 riots the same week that I started. Since then, the editors have taught me what makes a good story.

All seven internships (the others were as a blogger for this very site and at Canadian Family Physician) taught me different things. Together, they showed me the kind of journalist I want to be.

No matter the industry, internships offer lessons university that can’t, because university is nothing like the real world. In the real world, if you wake up and your apartment is flooded, you call your boss, apologize and stay late to finish your work. If you don’t show up at lecture, nobody cares.

The common argument against unpaid and under-paid internships is that poorer students can’t afford them. That will ensure that cool magazine jobs go to kids with rich parents, the critics say.

It’s not a bad argument, except that I don’t have rich parents and I managed to make it through. I did it by walking to work, eating as much free food as possible during work (a lucrative perk of interning at foodie magazines), and by allowing my student line of credit to climb ever higher.

I’m still paying back that loan now that I’m 27, but it’s surprisingly manageable. Poorer students than me had access to more bursaries, cushier government loans and plum work-study jobs during the school year, so I don’t buy the argument that they’re worse off. If they want it, they’ll make it work.

You might wonder whether my experience is common or if I just got lucky. I can tell you this: all of the interns I worked closely with at Toronto Life in the summer of 2009 are employed today.

Matthew Halliday is an editor at The Grid where he explores all of the weird, wacky and wonderful communities that make Toronto great. Karon Liu is a staff writer there focusing on the food scene, which gives him first dibs on every culinary innovation local chefs cook up. Kate Allen reports for The Toronto Star. Jessica Darmanin, former TL photo intern, is now a photo editor at Maclean’s.

We earned jobs in the industry we love, despite graduating after a global recession. We got them by doing multiple internships—some of them unpaid. It wasn’t easy, but it was often fun. If I had to do all seven internships over again, I would. So don’t let stories like Diana Wang’s scare you off.