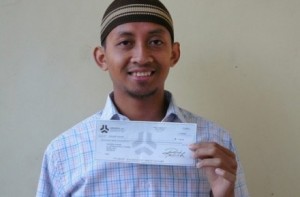 How much money do university students expect to make once they’re established in their careers?

The answer, revealed in a new study on the differences between generations’ career expectations, is one that Professor Sean Lyons, co-author of the study and University of Guelph business professor, finds “shocking.”

What’s surprising is that, after five years, Millenial women expect to make an average of $67,766 and Millenial men expect to rake in $84,868. To get there, men would need average annual salary increases of 14.8 per cent and women would need to grow their salaries 12.8 per cent per year. In real life, the average annual salary increase per year in more like three per cent.

But most shocking of all are Millenial students’ anticipated peak salaries. Women believe they will reach $125,664 at the height of their careers. Men believe they’ll max out at $171,036.

If that were true, “it would put them in that top one per cent of earners that the Occupy people hate so much,” says Lyons. It’s not merely that students think they’re exceptional. Millenials believe that six-figure incomes are normal. Female Millenials believe that people of similar education levels average $100,036 annually. Men estimate that those who hold the same degrees make $130,139.

But $100,000+ salaries put Canadians in the top four per cent of income earners in 2010. Very few are making what Millenials think is the normal wage for university graduates.

The study found many surprising differences between generations too. “One of the findings that we found astonishing is that when we look at the number of moves people have made over their careers, there’s an enormous change from one generation to the next,” says Lyons.

People under age 30 today (Millenials) change jobs three times more often than Baby Boomers (those born between 1946 and 1964) changed jobs before they turned 30, he says.

Millenials’ restlessness may partially be explained by differing values, says Lyons. “The older generations say ‘you stay because it’s the right thing to do’,” he explains. “[For Millenials] it’s such a common idea now that you don’t stay put… that to stay put is to stay stagnant,” says Lyons.

Millenials are also more likely than older generations to cite personal considerations for their decisions about whether to stay at a job or reduce their hours. Reasons for leaving include ethical considerations, time off for travel, time with family or more training.

It may seem ironic that students who are about to enter the workforce would have such lofty expectations about their jobs, considering all the buzz about stalled job growth across the Western World. But according to Lyons, Millenial students can’t be blamed for harbouring high expectations. They’ve been repeatedly told that Baby Boomers will retire early and job openings will bloom.

“That’s the story that’s been told all the way through university and college,” says Lyons. “But after the recession hit and peoples’ retirement incomes were affected by it, we’ve seen a prolonged employment period for boomers… and opportunities [for young people] haven’t materialized.”

And that’s a problem. “The concern is that young people aren’t tempering their expectations,” says Lyons “They’re just leaving jobs, rather than saying, ‘I guess my expectations weren’t realistic'”

But Lyons doesn’t blame Millenials. He blames parents, employers and educators who perpetuate the myth of endless opportunities and high salaries.

“I have colleagues who say [to their students], my student graduated into a six-figure job in accounting,” says Lyons. “Well, that’s fine, but most graduate into a $40,000 job,” he says.

“We talk about extremes,” laments Lyons. “What we don’t do is talk about norms.”

Perhaps one reason for students’ confusion is that associate professors averaged $113,148 in 2010—far above the norm.

Pay attention students—the average wage of Canadians aged 25 to 54 in September was $48,458.

The study, Generational Career Shift, is available here. It was conducted by researchers Sean Lyons of Guelph, Linda Schweitzer of Carleton University and Eddy Ng of Dalhousie University using a panel of 3,007 Canadians, including 906 Millenials.