Nine per cent drop in Ontario 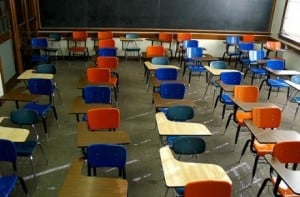 The Ontario College of Teachers sounded the alarm bells in 2011 about the gap between the number of graduating teachers and the shrinking number of  jobs available. Their survey of new graduates showed 24 per cent were unemployed and only one-third were employed full-time.

John Milloy, the minister in charge, reacted by taking the unprecedented step of capping the number of first-year education students at 9,058.

This week, new statistics show that students got the message. The Ontario University Application Centre reports that provincial teacher’s colleges received 8.9 per cent fewer applicants in 2012.

It’s not just Ontario where jobs are hard to find. The substitute list in Halfiax’s biggest school board had grown to 1,665 teachers in 2011, according to The Chronicle Herald. Last year just 119 teachers retired from the board. Meanwhile, Nova Scotia added 1,000 new teachers.

On the other side of the country, it’s a similar story. The number of applicants to education at the University of British Columbia fell from 688 in 2007 to 543 in 2011—a 21 per cent drop.

And UBC’s teacher’s college has been upfront with their students about the prospects of getting jobs directly out of school. “In 2010, roughly 2,700 new teachers were certified in British Columbia but only about 1,500 new positions were available,” the school admitted in a recent article online.

Still, UBC suggests there are reasons for grads to be hopeful. Certain specialty areas, like music, French, home economics, physics, math, and vocations like technology and cooking are in demand.

There are also plenty of jobs for adventurous graduates in places like Asia and the Middle East.

But most tellingly, UBC will introduce a mandatory non-traditional teaching practicum in 2012, to make their sure students explore other careers that education degrees might lead to.