The career that's good as gold 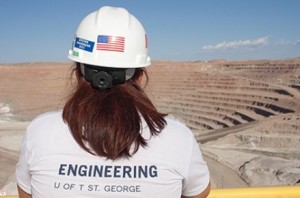 Kyle Buckoll finished his bachelor’s degree at the University of British Columbia in April. Unlike many 23-year-old university graduates, he didn’t settle at his parents’ house in Maple Ridge, B.C., to start hunting for internships or entry-level jobs. Instead, he went on an all-expenses-paid trip to Turkey with 31 fellow class-of-2012 graduates from UBC’s mining engineering program. They marvelled at Istanbul’s Hagia Sophia, visited two of the seven ancient wonders of the world, and lounged on beach chairs in Bodrum to toast their graduation. They also toured six mines, because the flight, hotels and buses were all paid for by mining companies eager to show their largesse.

Buckoll wasn’t worried about student loans, either. His tuition for the last four years was covered by Anglo-Swiss mining company Xstrata. In addition to working for the firm while at school, he promised to work for Xstrata after graduation (he will owe them money if he quits in the first two years). After a summer spent touring Europe for fun, he has a well-paying job waiting for him at the company’s mine in Timmins, Ont., in September. His two vehicles will be there, shipped from Vancouver at Xstrata’s expense. His girlfriend will join him there too, her flight and moving expenses covered. They’ll settle into a home with the rent taken care of for the first two months.

Buckoll’s situation, enviable as it sounds, isn’t uncommon. Practically all of his classmates graduated with jobs lined up. Good jobs: pay starts at around $65,000 per year for mining engineers-in-training (EITs) and climbs to around $100,000 after three to five years. Buckoll didn’t get a signing bonus, but he estimates that half of his classmates did.

It’s not just at UBC where finishing a mining engineering degree is like winning the lottery. Students at mining engineering schools across Canada tell similar tales of multiple job offers with perks. It’s because of a global shortage of mining engineers, the people who plan and monitor mineral extraction or work at banks and investment firms assessing current and future digs.

In light of the demand, it may seem ironic that these newly minted grads have backup plans. Buckoll’s is business school. “We’re in an industry that’s very, very hot right now,” he says, “but it’s sometimes a little bit cold.” Just months after he started the mining specialization in his second year at UBC, the industry turned “a lot cold,” says Buckoll. Mineral prices plunged alongside the global stock markets, which led to dozens of mine closures. The fact is, today’s hottest engineering field, the one drawing some of Canada’s most ambitious university students like a modern-day Klondike gold rush, is also dependent on Canada’s most volatile industry. Who knows how long the boom will last?

So far, that recessionary drop in mineral production appears to have been a blip in a decade of mostly huge growth. Canada produced more than $50 billion of minerals in 2011, according to Natural Resources Canada. That was up 150 per cent from 2001, when the haul was about $20 billion. The growth in mining engineering programs has followed the growth in production. Ten years ago, McGill’s mining engineering program was only receiving one or two applications per year. This year there were 250 students competing for at least 35 spots. It’s a Canada-wide phenomenon. In 2006, 88 mining engineers graduated in Canada. In 2010, there were 200.

One of those graduates is Sabrina Miguel, 22, who finished her degree from the University of Toronto in April and then started a job in June at Rio Tinto’s borax mine in California’s Mojave Desert. In a few years she might be working at Rio Tinto’s giant Oyu Tolgoi mine in Mongolia. International travel is a given for mining engineers. They’re in demand worldwide.

Travel is not the only reason the field attracts plucky people. Good job prospects are obviously top of the list. Miguel, like most of the young engineers interviewed for this article, chose the specialization on the advice of an established engineer. A civil engineer, a friend of her father’s, back in her hometown of Whitby, Ont., told her, “Don’t go into civil,” she recalls. “He said, ‘There are no jobs, you’ll have to do a master’s, and then maybe you’ll get a job, but it will be a horribly paying job.’ ” He told her mining was the quickest route to a high-paying career.

So far so good. Miguel had four companies call, starting in January, to express interest in hiring her. The first was Rio Tinto, which paid for her flight to Los Angeles for a job interview. They offered her a “dream job” before she could even consider the other two companies. She nailed down employment months before graduation. How many 22-year-olds can say that?

When Miguel flew back—first class, no less—to L.A. to start work in June, she had a corporate apartment waiting for her, along with all of her possessions, which Rio Tinto had shipped there. A lawyer took care of the work visa. Relocation agents assisted with everything from Social Security to driving her to see apartments. Her workdays are long, but she gets weekends and every second Friday off. She and other young engineers at her firm often drive to Los Angeles on the weekends. The crew spent Independence Day chilling on Venice Beach.

Click to hear Sabrina Miguel talk about how well mining engineering has treated her so far.

Sometimes the recruiting becomes a bit much. Fifth-year UBC student Ben Collins, 22, has been recruited nearly non-stop since third year. Almost every week a mining company would invite his class to learn more about the company. These weren’t your typical free-pizza-and-pens affairs. Sometimes they were dinners at the nearby University Golf Club or downtown at the Hyatt hotel. Often events would end with free drinks at the campus pub. Free beer and food may sound enticing to most students, but Collins says it got tiring—that’s how often it happened. Other engineers were rarely invited. That may explain the jealousy mining students talk of, especially considering their final co-op work terms are the highest-paying, averaging $4,290 a month, according to UBC. That’s around 25 per cent higher than the pay mechanical and civil engineering students get. Collins’s last two co-op jobs, which he accepted after companies approached him months in advance of workterms, paid better wages than the average Canadian earns: $22.50 an hour.

Miguel says the abundance of high-paying jobs leads to some resentment from other engineers. “They don’t really like us,” she says, “but they like the money we bring in.” The new Goldcorp Mining Innovation Suite at U of T, with 100 workstations that allow for cutting-edge design, is an example. The lab is open to civil engineers too, but it might not have been built without mining money. The suite was part of a $9-million donation from Goldcorp, the Vancouver-based mining company, and Pierre Lassonde, the chairman of mining giant Franco-Nevada. The money wasn’t Lassonde’s only substantial donation to a Canadian engineering school with a mining department. He pledged $25 million in November to the renamed Lassonde School of Engineering at York University.

Donations above $10 million are rare at Canadian universities, but mining entrepreneurs keep on giving. Stan Bharti, chairman of the resource-focused merchant bank Forbes & Manhattan, gave $10 million to Laurentian University’s engineering school in 2011. The department of mining engineering at Queen’s University was named for Kinross Gold founder Robert Buchan after his $10-million donation in 2009. UBC’s Norman B. Keevil Institute of Mining Engineering was named for the chairman of Teck Cominco (now Teck Resources) after a $7.5-million injection. The message to students is that mining companies can provide a golden future.

Bernhard Klein, head of the mining engineering department at UBC, says that Keevil’s donation in 2006 came at a time when optimism about the future of the mining profession was growing, but he has also witnessed more than one period when pessimism about the industry meant few job prospects for grads. In fact, the reason he is an academic today is that industry jobs were few and far between when he graduated in 1985.

Considering his history, one might assume Klein is worried this boom could go bust and put his graduates out of work. He says he isn’t. “A lot of people are going to retire, and people with intermediate experience just don’t exist,” Klein explains. “It means that if metal prices were to drop it wouldn’t necessarily have a significant impact on the demand for graduates from our programs, because there’s such a large shortage.”

The Mining Industry Human Resources Council (MIHRC), which tracks these trends closely, wrote much the same in its annual report. Older mining engineers are retiring early—at the age of 59.5 on average. As a result, MIHRC predicts companies will need to hire 235 mining engineers in 2013, 370 by 2016 and 665 by 2021. With just 200 graduates in 2010, it looks as though mining engineering schools would be wise to admit more students.

Still, before rushing into the field, students may want to consider David Coleman’s advice. He’s chairman of the National Council of Deans of Engineering and Applied Science. Although he’s no expert on mining engineering, Coleman has seen engineering enrolment get out of line with job markets more than once. After the dot-com bubble burst in 2000, electrical, computing and software engineering enrolment shrank in response to industry layoffs. But just more than a decade later, Canadian companies can’t find enough new graduates with those degrees. Similarly, Coleman says civil engineering programs tend to attract students during economic booms, when construction increases, but students run the risk of graduating with poor short-term job prospects if the boom has passed by the time they finish school. Mechanical engineering is interesting too, he says. A decade of enrolment growth caused deans concern, but mechanical engineers still seem to find jobs, he says.

For Coleman, the lesson is that engineering students shouldn’t focus too much on today’s job market when choosing a specialization. “If I had any advice to students, it would be to do their homework about what the different engineering disciplines are all about,” he says. “Enthusiasm counts more than anything.”