The enduring stereotype of the male nurse

The number of men in nursing schools is growing (slowly) 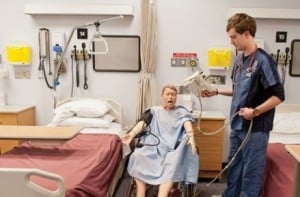 One recent November day, Tyler Hume, a 20-year-old nursing student, was at work in the maternity ward of Calgary’s Foothills Medical Centre. Tending to a patient who’d just given birth, he listened to her heart and checked other vital signs, then moved on to her new baby. Being a male nurse in a maternity unit can be tricky, he says—but as one of just a handful of men in the University of Calgary’s entire faculty of nursing, Hume is used to feeling like the odd man out sometimes. “It’s unconscious things, like when [an instructor] is talking about a nursing action, and always refers to the nurse as ‘she,’ ” he says. To create a resource for men in the program, he co-founded the Nursing Guys’ Group, a club for male nursing students.

This fall, 13 per cent of the high school students admitted to the University of Calgary’s nursing program were male, an all-time high. Across the country, the number of male nurses has doubled in the past decade, according to the Canadian Nurses Association (CNA), and now sits at roughly six per cent. But, compared to other professions that suffer from a gender imbalance, nursing is still incredibly skewed. Consider the fact that about 19 per cent of Canadian police officers are female, or that upwards of 30 per cent of elementary school teachers are male. The CNA predicts we’ll be short about 60,000 nurses by 2015, but there are no national strategies to attract more men into the profession. Calgary’s Nursing Guys’ Club is one of the few supports that’s been set up specifically for male nurses, who still face what Hume calls a “societal stigma.”

Male nurses have long been viewed as “less masculine,” notes a study in the American Journal of Men’s Health in November that attempts to put this stereotype to bed. Researchers took a survey of male and female nursing students across the U.S., scoring them based on certain personality traits. It concluded that the nursing profession attracts “males who hold a high degree of masculinity.” The fact that researchers bother to study questions like this might seem surprising, but gender-driven clichés about the nursing profession go back generations: for women, it’s “Hot Lips” Houlihan, or the “sexy nurse” Halloween costume. If female nurses are over-sexualized, male nurses are just the opposite, like Ben Stiller’s goofy character in Meet the Parents. On the TV show Scrubs, one of the main characters (a female doctor) finds herself attracted to a “murse,” despite her initial aversion to his profession.

Gender can impact a nurse’s role while on duty, but not in the ways these stereotypes would suggest. “Men have traditionally been used as the muscle, to lift heavy patients, or sometimes to fill the role of security guard,” says Peter Kellett, a nursing instructor at the University of Lethbridge who studies male nurses. In 1996, while working in Texas, he recalls being called in to deal with a violent patient. “I was shoved into this room, and there was a guy waving a knife,” he says. “I’m not a physical person,” so instead of restraining him, he talked him down until the police came. In a 2009 Statistics Canada study, 46 per cent of male nurses said they’d been physically assaulted by a patient in the previous year, compared to 33 per cent of female nurses.

Like the University of Calgary, Lethbridge has seen an influx of male students: of their first-year class of 170, according to Kellett, 25 are men. Even if things are changing, though, the pace can seem glacial. Chris Coxon, a 32-year-old nursing student at Dalhousie University in Halifax, says he never even saw a male guest speaker in his program until third year. “Nursing will be female-dominated for the considerable future,” he predicts. In his class of 145, there are just five males. “With so many women, it will take years to balance out.”

But in this tight job market, a high demand for nurses has become an attraction to males and females alike. For men who choose nursing, the profession can be incredibly rewarding. “Shows like Grey’s Anatomy and House give the impression a physician is with the patient all day, but the reality is, they might only see the patient for a few minutes,” Kellett says. “Nurses work with patients all the time, and develop more of a relationship with them.” This connection has been a huge part of the appeal for Riley Simister, 19, a second-year nursing student in Calgary. “I like the hands-on work with people,” says Simister, who recently gave flu vaccines to the public as part of his program.

Mathieu LeBreton, 27, works as a nurse in the emergency department at the Ottawa Hospital’s Civic Campus. “I’ve been practising 4½ years, and haven’t looked back,” he says. A self-professed “adrenalin junkie,” he finds the work exciting and challenging, since no two days are the same. “Whether it’s a male nurse or a female, we’re just making sure the patient is safe,” he says. As more men like LeBreton become the public face of nursing—instead of Ben Stiller, quaking before prospective father-in-law Robert De Niro—this worn-out stereotype will finally fade away.