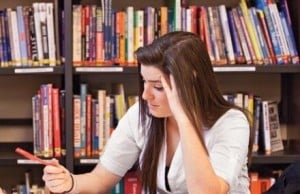 From the 2013 Student Issue on sale now.

Mike St. Jean is in his seventh year of political science at Lakehead University in Thunder Bay, Ont. “I still don’t even know what I can do with my degree,” he says. “I can get a job in government or elections, but other than that, the transition seems hard to lay out. I read books and analyze them. What does that mean to the real world?”

It’s not as if it hit him suddenly. The question “What’s next?” is one of the reasons he dropped down to part-time studies in year four of his degree. Another reason was that he needed time for his part-time job and his work with the Argus student newspaper, where he’s now an editor.

Lakehead’s counsellors haven’t helped. He only visited them once, years ago, and was told to consider a master’s in English or an education degree. “I don’t know how many jobs there are for teachers,” he says. What he does know is that a friend who took education moved to England because she couldn’t find work here. A master’s didn’t strike him as a good plan, either; he’s seen multiple master’s graduates and one Ph.D. apply for low-wage jobs at the Subway where he works. Professors are encouraging, but they don’t offer career advice. His parents want to help, but “they think university is about curing cancer and rocket science,” he says. “They have no idea what I’m in.”

Ashley Teo, a fourth-year student in economics and psychology at the University of Toronto, has a clearer plan. Her sights are set on management consulting and she has an impressive resumé geared toward that, including a volunteer position at the Youth Social Innovation Capital Fund and an internship with the Queen’s University Office of Global Health in Tanzania. She wants to go straight to work after graduation, so at the beginning of the school year, she went to the career centre.

By the time she found out—from friends, not the centre—that businesses were recruiting, the process was already underway. Had she not been proactive, she wouldn’t have known that the big companies were hiring in September 2012 for jobs starting in September 2013. Like St. Jean, she says no one on campus is teaching students much about careers. “All the talks I get from my professors are about applying to grad school,” she says, “not about getting jobs.”

Just about any professor will tell you universities aren’t meant to help students get jobs. Many echo Sean Lyons, a business professor at the University of Guelph, who describes a university’s mission. “We’re there to develop longer-term competencies: critical thinking, analytical skills, intellectual growth.” But where Lyons differs from many professors is that he—like many people who deal with students outside the university—says the university should do a better job showing students the path from school to work. “We don’t send clear signals to our students about what they can expect when they graduate,” he says. “We’re setting them up for failure.”

One way universities fail students is by contributing to the myth that most undergraduate degrees lead to high-paying jobs. Research published by Lyons and research partners in 2011 showed most students are delusional about how much money they will earn within five years of graduation—women expect $68,000 and men anticipate $85,000. It’s not until they get their first job offers that they realize entry-level pay is more like $40,000. He says the expectation gap is partly the fault of recruiters. “Every program has someone who graduates and makes $70,000 going out the door. It’s rare but it happens,” he says. “You tell that story when recruiting.”

He says the solution is a combination of better-informed parents, more support services on campus and frank discussion with professors during classes. “I’d like to see something in all first-year university courses with the message, ‘This is what your career path’s likely to look like.’ ”

It’s not just future pay and job prospects that many students are clueless about. It’s also the mechanics of getting jobs: how to network, how to write cover letters and how recruiting works.

But only to those who find it. The career centre’s location—at the end of a labyrinth of brick hallways many minutes from the centre of campus where students eat, shop and socialize—is the first clue that career planning is an afterthought. And not just at York University: only 31 per cent of graduating students nationwide said they used career services on campus, according to the 2012 report by the Canadian University Survey Consortium, a non-profit network of universities which polls thousands of undergraduate students each year.

On a recent visit to York’s career centre, Liz Cook can be found teaching a cover letter-writing workshop to 25 students. She’s drilling into them something that would seem basic to those already in the workforce: each job application warrants a new cover letter. It’s a surprise to some. The good news, according to centre director Julie Rahmer, is that more students are asking for help with this stuff, and earlier than before. The bad news is there aren’t enough resources to offer career counselling to all first-year students. This cover-letter workshop is one of the busier ones Cook has given—and there are 55,000 students at York.

Jacquie Ison, a Toronto mother, noticed the need for career guidance among her daughter’s friends and turned it into a business two years ago. Great Gig Student Jobs helps university students and recent graduates figure out their career goals, then sets them up with interviews for entry-level work. It costs $300 to get started and $1,400 more when students land paid jobs at a partner company. Ison says the lack of career preparation is shocking. One master’s graduate wanted an employer to give her five extra days to prepare for an interview. “I said, ‘After five days, the position will be gone,’ ” Ison recalls. “She lost out on two possibilities because she wasn’t ready to go.” She says every college and university student should get six months of instruction in job-search techniques from their schools.

Robert Luke, the assistant vice-president of research and innovation at George Brown College in Toronto, says the failure to show students which skills they need for the current job market is contributing to Canada’s lagging productivity. “We have a lot of jobs in this country for which we don’t have people,” he says. A recent Canadian Imperial Bank of Commerce report suggests much the same: there’s a shortage of workers in areas such as health care, natural resources extraction and plumbing—despite an overall unemployment rate of 7.1 per cent in January.

Luke says the culture of universities is partly to blame. “A lot of university people say, ‘It’s not our job to educate for jobs,’ ” but to build better citizens. “In my world, citizenship includes getting a job and paying taxes,” he says.

Luke thinks career counselling should start “from day one” and that each program should have clearly articulated outcomes so students can decide whether their degrees are worthy investments. When students start degrees, someone needs to tell them, “‘Here’s the type of job you can expect to get and here’s the rate of pay you can expect.’ ”

The good news, in his view, is that students are gaining skills; they just don’t know how to apply them to the current job market. He uses St. Jean at Lakehead as an example: he has probably picked up communication skills that would work in business. “If you want to pitch a business, you’ve got 30 seconds and that means you’ve got to synthesize a lot of information and communicate it,” he says.

St. Jean may indeed be suited for business. He becomes animated when he talks of how the Argus cut printing costs; the challenges of adding a correspondent at the Orillia, Ont., campus; and the successful presentation he made to the student union to have funding renewed. In fact, business is something he’s flirted with. “I have a couple friends who did business degrees,” he says. “They’re my age and they got jobs and bought houses, but I’m still dangling along, not knowing where to go.”