From dirt and dreams to student favourite: what’s different about Quest University is pretty much everything 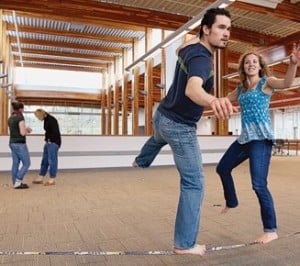 When Celeta Cook of Deseronto, Ont., applied five years ago as a 17-year-old to Quest University, the hilltop site in the coastal mountain community of Squamish, B.C., was little more than dirt and dreams. “I did my preview day in a hard hat and a reflective vest,” says Cook, now part of Quest’s first grad class this April 30. The library will be finished, she was promised, “it just hasn’t been built yet.” Far from being put off, she was excited. “All right,” she said, “I’ll see you guys in September.” She was one of 73 students in 2007. There are now about 300, as it builds toward its capacity of 650—still smaller than most of the high schools the students came from.

For Cook, it was a good fit. Quest, a private, not-for-profit undergraduate liberal arts and sciences university, is not for the faint of heart. Its promotional literature welcomes “iconoclasts, convention-challengers, pioneers, risktakers, edge seekers, creators . . . ” The same criteria apply to its faculty, and certainly its outgoing president, David J. Helfand, who divides his time between two coasts. He’s a teacher and administrator at Quest, and he chairs the astronomy department at New York’s Ivy League Columbia University.

What’s different about Quest is pretty much everything. Classes are capped at 20 students and average about 15. There being no place to hide, Quest has an astonishing level of student participation. Helfand points with pride to the new results of the 2010 National Survey of Student Engagement (NSSE), revealed in this issue of Maclean’s. Quest’s first-year students (there were no senior students yet to survey) recorded student involvement and satisfaction far beyond larger, older universities. It finished top among Canadian universities in five key outcomes: academic challenge, student-faculty interaction, supportive campus environment, active and collaborative learning, and enriching educational experience. “That’s the one bit of truly independent evidence that we have that what we’re doing is really quite special,” Helfand says of the NSSE scores.

One of the greatest contributors to engagement is Quest’s block program, unique in Canada. Subjects are taught one at a time in 3½-week blocks: three hours a day of class time, and hours more of research, reading, group work and writing. For instance, students are immersed in the works of Homer, Plato and Thucydides for one month, then move on, to visual mathematics or ecology or political economy. By third year, students have picked “the Question,” an intellectual inquiry of their choosing that they’ll spend the next two years exploring from every conceivable angle. Cook’s is: “Why do we care?”—a look at what motivates empathy versus apathy. Julian Seemann-Sterling, a third-year student from Berlin, is exploring: “Is world government possible and desirable?” Carmen Petrick, a third-year student aiming for medical school, asks: “What are the social practices that lead to the spread of pandemics?”

Students also do up to four experiential learning blocks, such as a work term, internship or study abroad. Cook put her question to the test by working 2½ months in a Cambodian orphanage for children with physical and mental disabilities. One student worked for a computer security firm. Another went to a Buddhist ashram.

In all cases, the block system is key. It gave tutor Maï Yasué the freedom to camp with her “ecological self ” class on a remote west Vancouver Island beach for 13 days, something that would have been impossible with students juggling four other courses. Helfand admits he was skeptical about the idea when he was brought in by Quest founder (and former University of British Columbia president) David Strangway to consult in Quest’s planning. By the time the school opened, he was so smitten with the program he took a leave from Columbia to teach four course blocks—a “transformative experience,” he says. “I’ve been at Columbia for 34 years teaching in the standard semester format with lectures.” It is, he says now, “a totally ineffective way of teaching.”

A rare few other academics are coming to a similar conclusion. Algoma University in Sault Ste. Marie cancelled classes in late January to look at a shift to a block system. Algoma president Richard Myers is an enthusiastic proponent, noting the system would enhance off-site learning, attract foreign students and stop that “end-of-term panic that grips students in late November and late March” as all course requirements come due at once. The issue, after further study, will be determined by Algoma’s senate. Helfand has also consulted at the University of Northern British Columbia where, too, there is some interest, and much skepticism, about block teaching.

Helfand had another reason for hanging around Quest that first year. He was curious: “What kind of students would come to a university that didn’t exist?” Adventurous ones, it turns out. The students go through a rigorous selection process. They submit a standard application, write an essay, and produce an original work, be it music, art, or sporting achievement. The interview, in person or on Skype, is key to ensure they’re a good fit. “Last week we admitted a student who had a 74 average and rejected a student who had an 86 average,” says Helfand. “One was ready to engage with this kind of education and the other one was clearly not.”

Building a private university with enviable class sizes doesn’t come cheap. Tuition runs $27,000 with another $8,660 for room and board. The university, recognizing the barrier, offers full and partial scholarships. “Eighty-five per cent of our incoming students, as with our current students, will receive one or more of the three forms of financial aid we provide: merit-based scholarships, need-based bursary grants, and/or on-campus employment opportunities,” says Melanie Koenderman, dean of student affairs.

For students who make the grade, the experience is almost unparalleled. Everyone knows your name, from the professors (called tutors to emphasis the commitment to teaching) to the cafeteria staff. When life sciences tutor Annie Prud’homme Généreux was asked to write a reference for a senior applying to grad school, she knew the student so well she rattled off a five-page letter. How many undergrads get that from their professors?

In part the bond comes from growing an idea together. “I feel like Quest is mine, in the sense that I’m shouldering a burden for its success or failure,” says Prud’homme Généreux. Hours earlier, Megan Myles, a spirited second-year student, said much the same as she led a tour of the campus. “We’re here to help create a university,” she said, looking past a residence building to the forest beyond. “We didn’t come just to attend one.”