Deserve the grade just because you paid?

Watch out: academic entitlement has consequences 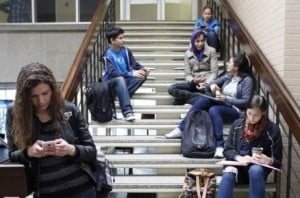 Students at U. Waterloo (Jessica Darmanin)

We hear a lot about how “entitled” students are these days. Employers complain of new graduates who want to be the boss right away or who demand high pay before they’ve earned it.

New research by four students at the University of Windsor, all in the Master in Social Data Analysis program, sheds light on the phenomenon. The researchers e-mailed a 96-question survey to all students on campus and used 1,025 responses.

The good news: entitled students aren’t the norm. The bad news: those who feel entitled may be setting themselves up for failure at school or work.

Academically entitled students are those who want exams rescheduled around personal plans or who think they deserve high marks so long as they’ve paid their tuition and put in the hours. They’re like Cher Horowitz, the Beverly Hills bimbo who argues her way to As in the 1995 film Clueless.

The negative consequences from academic entitlement, according to the researchers, include the fact that higher levels are related to lower grades and to academic dishonesty (cheating).

They also found that academic entitlement suggests current and future workplace entitlement. Those who show signs are more likely to agree with statements like, ‘I expect to be hired in a high ranking and high paying position after graduation,’ ‘I expect to be promoted rapidly because of my university degree,’ and ‘the job I get will give me maximum flexibility in vacation and other time off.’

Amy Peirone, one of the students, says that’s a problem. “When students go into the workforce, if their expectations aren’t in line with their employer’s,” she says, “they may face lower levels of job satisfaction and life satisfaction, less satisfaction with pay, missed work days, job frustration…”

But she also sees a solution. Professors may be able to reduce academic entitlement by making expectations clearer. “If teachers say, ‘this is an example of an A paper,’ students won’t be as likely to come crying to them when they get a C just because they tried hard and stayed up all night.”

That’s an important lesson for students. After all, bosses aren’t nearly as forgiving as professors.