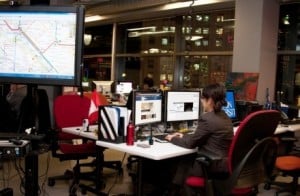 He didn’t expect it would also help him become a big wig on Main Street.

“I figured, out of all the undergrad possibilities that were out there, a business degree would position me as the most well-rounded coming out of school,” said the 22-year-old president and co-founder of mobile app PumpUp.

“So I could either start something or get a great job and just have those good skills.”

After graduating last summer from Wilfrid Laurier University in Waterloo, Ont., Jacobson decided that his dream wasn’t to get poached by a big financial firm. Instead, he wanted to continue working for himself.

And he’s not alone.

Although there are no statistics on how many university students become employers or self-employed after graduation, in recent years, Canadian universities have begun to update their curriculum to support an increasing number who want to work for themselves once they finish school.

Traditionally, post-secondary institutions mainly focused on teaching students the skills needed to get hired by someone else.

Jacobson currently runs his start-up with partner, Garrett Gottlieb, out of the Hyperdrive incubator program at Communitech in Waterloo, Ont., after making connections through the university.

The company employs a director of health and fitness, and a number of advisers. It launched PumpUp, an app that customizes workouts, last December.

Sheldon Levy, president and vice-chancellor of Ryerson University, says post-secondary institutions must realize their “responsibility” in fostering and supporting students who want to start small and medium-sized companies.

“Two and a half years ago, no one in the university sector was talking about students being entrepreneurs, now everyone is talking about it,” he said.

In 2010, the university in downtown Toronto opened a 12,000 square-feet of co-working space for students, alumni and young entrepreneurs. This year, that incubator, dubbed the Digital Media Zone, will expand to 35,000 to 40,000 square-feet.

Levy says during that time, 75 start-ups have worked out of the offices. Sixty-seven of those have become registered companies, creating more than 650 jobs.

“At the time, it was in the context of realizing the importance of experiential education and also that universities were going to have to pay attention to not only to educate the talent to be great employees but to take the responsibility for… their graduates to become the employers,” he said.

In the past, Levy says small-and medium-sized start-ups were typically based in blue-collar sectors, under the privy of trade colleges.

Now, many of these companies are in “knowledge-based” areas, partly due to lower startup costs, and universities should be prepared to help their graduates get their businesses off the ground.

Levy says although universities have to carve out their niche, it’s not a one-sized-fit-all mentally for what post-secondary institutions can do to promote entrepreneurship.

“I think universities will have to define their particular strengths and I wouldn’t say it would work for all institutions,” he said. “Each university will have to determine its excellence.”

Brennan McEachran, 22, says he’s noticed more and more of his peers in his undergraduate business administration classes foregoing that great job offer at a hedge fund or in finance to pursue their own companies.

McEachran, who started HitSend Inc., in his third year of university, says the jump in student entrepreneurs is largely due to universities understanding the importance of fostering ideas, mentorship and willingness to help get start-ups off the ground.

For some of his classes at Ryerson, he was able to submit projects and ideas he was working on voluntarily for class credit, helping him “turn out better projects because I cared,” said McEachran, who is originally from Cobourg, Ont.