Woman hacks it in a man’s world 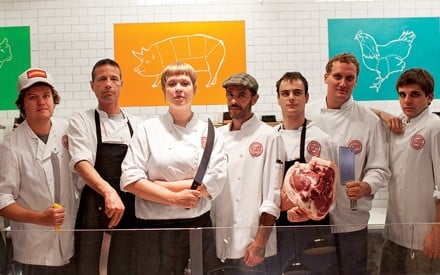 With displays filled with duck confit, wild boar and dry-aged beef, Olliffe is one of Toronto’s most drool-worthy butcher shops. The head butcher is usually behind the counter, fearlessly sharpening knives without looking and effortlessly trimming perfectly symmetrical steaks.

Erica Jamieson isn’t just Olliffe’s head butcher, she’s also the only female employee. At 27, she co-manages a staff of 12 men, some of whom have been butchering for nearly as long as she’s been alive. “When people enter a butcher shop, they expect to see the big European man with the cleaver and hairy arms,” she says. “I kind of fell into it.”

Jamieson grew up in the food industry: her grandfather worked at an abattoir in Ontario, where he slaughtered and butchered animals. She was also raised in her family’s bakery in Mount Forest, Ont., the Village Bakery, where she worked for nine years. “I’ve worked in food since I’ve been able to work and I’ve always enjoyed cutting,” Jamieson says. She initially moved to Toronto to go to school for, of all things, special-effects makeup for horror movies. She got a weekend job butchering at Toronto’s St. Lawrence Market, which changed her plans. “I just fell in love with it.”

Jamieson doesn’t just have butchering in her blood, it’s under her skin: sprawled across her inner bicep is a tattoo of her grandfather’s hacksaw—the one he gave her—crossed with boning and skinning knives, and a heart wrapped in butcher’s twine. “I love that butchering is an art form,” she says. “The whole aspect of, there’s an animal, it’s a beautiful creature when you look at it when it’s alive. As it’s hanging, it’s also beautiful.”

Jamieson isn’t the only female butcher around, but she is an oddity in an industry that is one of the most male-dominated trades. It isn’t exactly a shock that men make up most of the workforce: the job requires the physical fortitude to lift carcasses that can weigh as much as 115 lb. and to stand for long hours. It is also, as she admits, “pretty gross.” But Jamieson, who is half an inch short of six feet and completely at ease wiping fat off her knife onto her apron, can hold her own. “I’ve always been a tomboy.”

While she feels comfortable working with the Olliffe boys, she knows some customers are surprised to see a woman behind the counter. “Usually they make a weird face and say, ‘Do you have a boyfriend? You must be single,’ ” she says. “I sometimes forget that it’s their first time seeing me.”

Joseph Veauprez, a fellow Olliffe butcher, has been in the meat industry for more than two decades, but has only ever worked with two other female butchers. “Doesn’t matter to me so long as the people working beside me know how to cut,” he says. “It could be a clown working beside me. Another butcher is another butcher.”

But the trade is struggling. “It’s a dying breed, butchers,” Veauprez says. “I don’t see a lot of young people learning it anymore.” There are few culinary schools in Canada that offer certification in butchering—George Brown College in Toronto used to, but now it’s just a seven-week course. Butchers learn through apprenticeship and school isn’t necessary. The average butcher makes between $25,000 and $35,000 a year, but a head butcher can make $45,000.

Stuart Betteridge, a chef and butcher at George Brown, teaches the butchery and charcuterie course. “The industry has always been male-dominated but it’s changing,” he says, adding that women like Kari Underly, one of the U.S. butchers who introduced the flatiron steak to foodies, are becoming more prominent. “I think it’s a change of culture across the board in the catering industry. Women are so much more respected and they will dominate the field eventually.”

Her work isn’t any different than a man’s, but Jamieson says her presence may embolden female customers. “A lot of women who shop for meat, or anyone for that matter, if they see something they don’t know, they’re not going to ask questions,” she says. “The one thing that I always try to do when I’m in a store is create an atmosphere that’s comfortable for people.”