Motosport techs race to the top of the industry 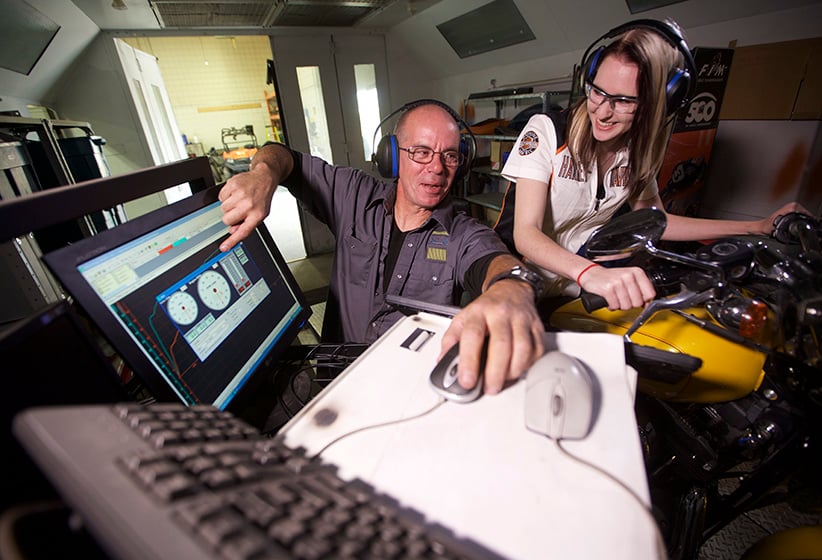 Ruth-Anne Klassen’s dream is to work for Harley-Davidson. The 22-year-old, who has been riding motorcycles for four years, hopes to turn that into a job when she graduates in June from the 10-month motosport technician program at the Manitoba Institute of Trades and Technology (MITT) in Winnipeg.

Klassen inherited the tinkering gene from her father, who grew up on a farm and continued to fix machinery as an adult.

The MITT program was a perfect fit, as it focuses on motorcycles, snowmobiles, all-terrain vehicles (ATVs) and personal watercraft—what instructor Geoff Ives refers to as “toys.”

Ives, a service technician with 20 years’ experience, pitched the idea of the program in 2007 after he saw a need for high-quality, entry-level technicians.

Facility-wise, MITT is stacked. With 12 service bays, a fuel-injection diagnostics lab and a dynamometer to measure engine power, it offers hands-on learning.

“We pride ourselves on being able to react to what the employers want. We saw a big swing toward the utility task vehicles (UTVs), which was a big demand for more shop space,” Ives says, referring to the ATV’s work-focused counterpart. “These things are almost the size of full-size trucks nowadays.”

Just like some of his students, who race and ride on weekends, Ives is a title-winning road racer. And yes, he lets his students work on his Canadian Thunder 2007 Kawasaki EX650 and 2007 Suzuki GSXR 750.

The technician program usually takes around 18 people a year, with more than half coming from outside Winnipeg, some from as far away as Iqaluit. The male-to-female ratio is about four to one, but Ives says he’s got female grads working all over the province.

The skills are in demand and he doesn’t see that changing soon. “Everybody has to relax somehow, and it seems like everyone is going to the cabin and they’re snowmobiling, they’re ATV riding, they’re going fishing.” Motosport is also a family activity. “That’s why I joke that it’s recession-proof,” he said. “Times might be tough, but they’re still buying $20,000 ATVs and $40,000 motorcycles.”

On his summer breaks, Ives works for a couple of dealers in the city, which guarantees he’s up-to-date on the newest technology.

The starting wage for a grad in Winnipeg right now is between $13 and $14.50 an hour, but Ives says some make $25 an hour after five years. “I’ve got grads working everywhere from Honda to BMW, to Polaris, Suzuki, Kawasaki, you name it.”

Jason Morin, 41, was a passionate motocross rider who, after a riding accident, had to have back surgery. He also had to find another line of work when he couldn’t do the heavy lifting required by his railway job. Seven years ago, he saw a TV ad about the new program. “When I saw the school infomercial on one of the local channels, I thought I’d like to try that out.” As a motocross rider, Morin was always working on his own bikes. “I knew how to take the part off and put it back on, but I didn’t know exactly what the part did.” What he learned earned him a full-time job after his work practicum at Capitol Motosports in Winnipeg.

“Even to this day, [Ives] is on my speed dial. Any time I’m doing work at home, he’s more than glad to give me advice.”

There are a handful of other institutions that offer power-sport technician programs, including Centennial College’s school of transportation in Toronto, Conestoga College at its Guelph, Ont., campus, and Saskatchewan Polytechnic in Regina.

MITT’s class of 2016 is already revving up the resumés. Klassen has applied to Harley-Davidson, and she’s optimistic about her chances. “I definitely think it’s a realistic goal.