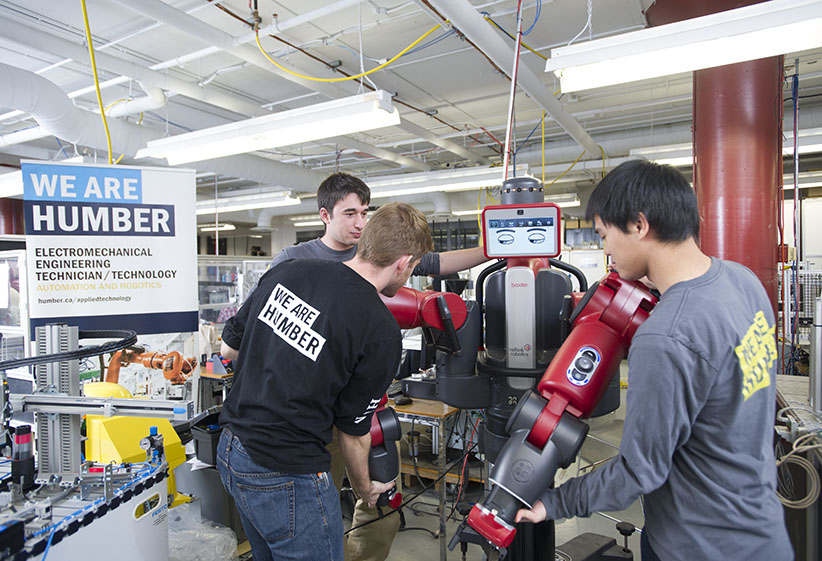 The Humber program’s focus on automation and robotics crosses a raft of disciplines, from welding and wiring and hydraulics to programming and motion control.post-secondary prorgams (Photograph by Cole Garside)

The best skill is all of them. In a world that’s being reshaped by technologies almost as fast as we can dream them up, knowing how to do one thing, or even two things, isn’t enough. Adaptability is the new key to success.

Proof of that concept can be found in the electromechanical engineering technology labs at Toronto’s Humber College. Each fall, companies such as Magna, Festo, Wittmann Robotics and Esys Automation visit campus to pitch their virtues to students. Then, in the spring, they return to scoop up the graduates. Neal Mohammed, the program coordinator, tracks the hiring rates. Over the past six years, almost 70 per cent of his students have found jobs before the program ended in April. By graduation time in June, it’s in the 95 to 98 per cent range. “Some of these kids only sent out one resumé and got hired,” he boasts. “They didn’t even have to leave campus.”

The Humber program, which focuses on automation and robotics, crosses a raft of disciplines, from welding, wiring and hydraulics, to programming and motion control. Students can opt for a technician’s diploma after two years and a career maintaining and servicing automated systems, or carry on for a third year to become a technologist, with an eye to designing and building such machines.

Every year, Mohammed and Humber officials meet with an advisory board to make sure the courses are in step with where industry is heading. “What we hear is that the kids need to have more applied, hands-on knowledge,” says Mohammed, “and that our graduates need to be able to adapt very quickly.”

Esys Automation, a Michigan-based company that designs and builds assembly lines for automakers, has hired more than 20 program grads over the past few years. With its business growing almost 15 per cent a year, the company is already on the hunt for more. Scott Claxton, vice-president of productions systems, says it’s the third-year project—where students work in teams to create a fully integrated and operational automated system—that sets Humber apart. Over the past decade, those projects have won the college’s students 19 gold medals in provincial, national and international “mechatronics” competitions. “If you want to get into this field, it’s imperative that you find a program with hands-on training. That’s what employers are looking for,” says Claxton. “And Neal’s one mimics the needs of industry perfectly.”

Ryan Walker, a 22-year-old from Toronto, developed a fascination with computers and robots in high school. When he heard about the Humber program from friends, it sounded like a natural fit. “I went to an open house, and it was a total no-brainer,” he says. “Just walking around the labs, you could see the amount of technology they had—project logic controllers and robots all stuffed into a room.”

After three years of study, Walker graduated last spring with a technologist diploma, and walked straight into a job with Esys. (The company had awarded him one of the 10 $1,000 bursaries that it gives each year to Humber students in the fall of 2014.) So far, he’s been working on designing paint and glazing systems for a variety of automakers, and, soon, he will travel to Tennessee to oversee an installation. Walker likes that he’s involved in projects from beginning to end. “It’s an opportunity that I don’t believe I could find in Canada,” he says. “I’m ecstatic with how things are going. I love my job.”

Mohammed says his grads are commanding starting salaries in the $45,000 to $50,000 range and, within a few years, are making $80,000 to $100,000. Emerging trends such as the integration of machines and the Internet will only make their skill set more valuable. University teaches theory, he says, but college puts it into action. “What industry is really looking for is students who can come out and connect the dots.”