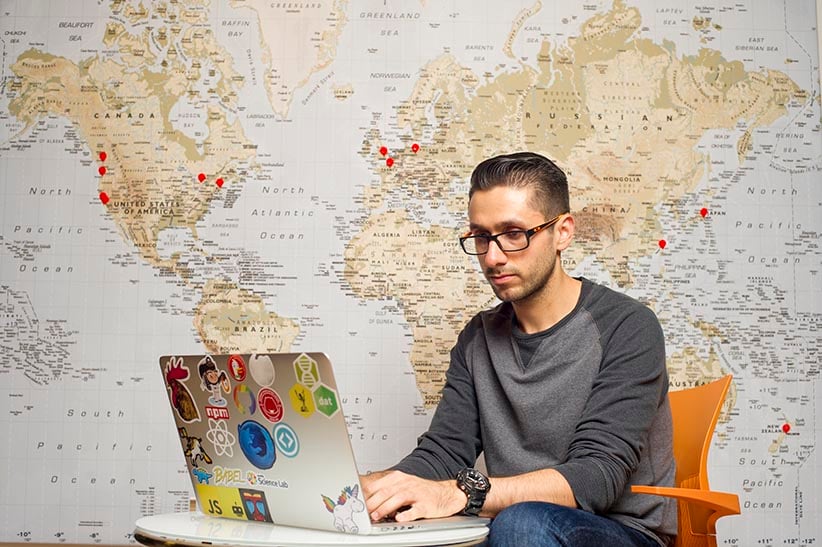 Ali Al Dallal is a Toronto-based software developer at the non-profit Mozilla Foundation. Ask him how he got there—how he fell in love with the complex world of computer code, then turned that passion into a career—and his explanation is anything but typical. “My story, I’m not sure if it’s interesting,” he says. “But I’m going to tell you anyway.”

Born in Iraq, Al Dallal immigrated to Thailand with the rest of his family at the age of three. When his entrepreneurial father opened an Internet café in Bangkok, young Ali was put in charge of maintaining the computers. By his 10th birthday, he could assemble a desktop all on his own. A natural.

When his dad died suddenly in 2003, Al Dallal’s family considered moving back to Iraq, but the U.S.-led invasion changed their minds. They applied to come to Canada instead, arriving in Ontario in September 2008. “Because my father had passed away, I wanted to get a good job and take care of my family,” says Al Dallal, now 26. “That is how our culture works. I have to be the one taking responsibility.”

Although a career in computers appeared the obvious choice, Al Dallal wanted to expand his horizons. An amateur expert on all things hardware, he decided to pursue a field of study he knew nothing about: programming. “I had zero background in it,” he says. “I’d never done programming before.”

After weighing numerous options, he settled on Seneca College’s School of Information & Communications Technology (ICT), located on the York University campus. He has never looked back.

Al Dallal’s hands-on education included an internship at Seneca’s renowned Centre for Development of Open Technology, more commonly known as CDOT (pronounced “See-Dot”). A hi-tech lab for the hardest-core programmers, the centre allows students to research and develop open-source software, much of it provided by Mozilla. As practical as any classroom can be, there is really nothing like it on any other Canadian campus.

Over the past decade, hundreds of Seneca graduates funnelled through CDOT have contributed their own ideas, and code, to improving the interactivity of Mozilla software—creating everything from 3D environments in video games to making it possible to put captions on web videos. Al Dallal was involved in several Mozilla-linked projects, including Popcorn, an app that allows anyone to enhance, remix and share video or audio files. “I am passionate about the web,” he says. “You can always learn something new.”

But Al Dallal’s most rewarding task—one he continues to work on, now he’s been hired by Mozilla—is helping to ensure non-English users have access to popular software, namely Webmaker, Mozilla’s Internet literacy program. Fluent in three languages (Arabic, Thai and English), Al Dallal understands better than most how important it is that the World Wide Web be available to all, regardless of mother tongue.

“We are focusing on people in India or Bangladesh, people who are just starting to be able to access the web, but whose first language is not English,” he says. “The technical term is ‘localization.’ I had to create a new infrastructure that would detect and try to serve the right content for the right people.”

It is gratifying work. “The web is free, and people should be able to use it no matter what,” he says. “I’m actually very proud of my work, although I feel I can do more and I always try to push it.”

Whatever he accomplishes, Al Dallal knows he wouldn’t be where he is without his college diploma. “I am very happy that I took this path,” he says. “In university, they teach you mostly about theory. In college, you learn the practical stuff.”