The feel-good factor: How volunteering can boost office morale

Giving employees time off to volunteer, or funding their philanthropic work, is an easy way to improve morale at work 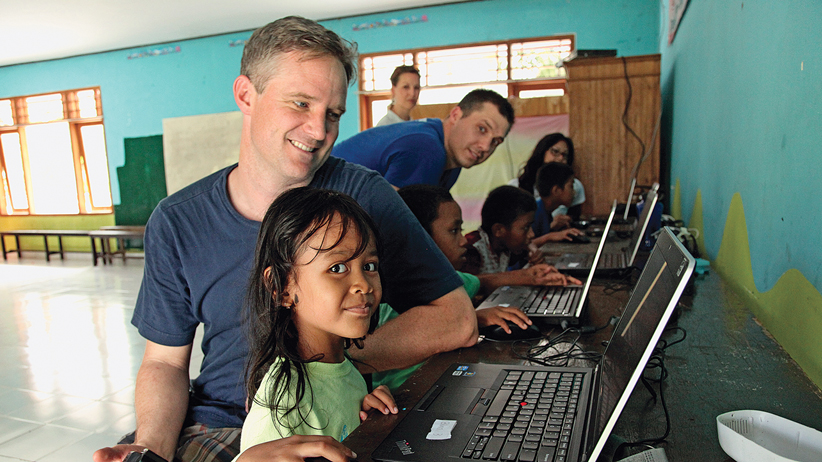 Some people sit on a beach when they have paid time off from work. Eric Gardiner went to Indonesia to help build computer labs in orphanages in remote parts of the Southeast Asian country. Gardiner, a senior marketing manager at the technology company Softchoice, spent 14 days in Indonesia during the 2012 project. He and his colleagues raised money for the equipment, but Toronto-based Softchoice paid the team’s salaries, plus their travel and accommodation costs. “When we opened up the laptops for the first time, you’d sit with the children—that was an emotional experience,” says Gardiner.

Softchoice sent its first volunteers abroad after the 2004 tsunami in the Indian Ocean, and immediately noticed a boost to company morale. “It was so cool. We couldn’t let it stop there, we had to keep doing it,” Nick Foster, the company’s then head of human resources, says of the philanthropy program.

Softchoice is one of a growing number of companies that see supporting worker engagement with charities as a relatively low-cost way to increase employee morale. OMERS Administration Corp., which oversees pension funds for Ontario’s municipal workers, has sent volunteers to places such as Cambodia and Haiti to work in schools or to help with earthquake reconstruction, while other Canadian firms give workers time off to bag lentils for local food banks, build homes for Habitat for Humanity or organize events for local community groups. “This is about creating an emotional profit centre for your company,” says Peggie Pelosi, a corporate consultant who specializes in helping firms develop philanthropic strategies.

Pelosi says that, when she started her firm, Orenda Connections, 10 years ago, the concept of employee philanthropy was just starting to show up on business leaders’ radar screens. “But now, it’s something employees are demanding,” she says. “There’s all sorts of research showing how Millennials will come into a job interview asking, ‘What is your company doing to give back to the community?’ ”

OMERS offers paid 10-day sabbaticals to selected employees who work on specific charitable projects. Would-be volunteers present management with a detailed plan, explaining how they would spend their time and what they hope to achieve, and the company chooses the winners in a highly competitive contest. “If we have employees who are highly engaged, it’s really an investment in the culture of the organization,” says Claire McIntyre, spokeswoman for the pension fund’s real estate arm, Oxford Properties Group.

For OMERS, the program represents a modest financial commitment in the form of salary, travel and accommodation costs. But the so-called feel-good factor is huge, so the benefits extend well beyond the village or organization that is the immediate recipient.

Closer to home, Island Savings, a B.C. credit union, found that, by focusing its efforts on southern Vancouver Island, where most of its 16 branches are located, it has been able to boost its profile in the community. It encourages staff to volunteer at local sports days and other fundraising events and recognizes top volunteers throughout the year. “The program is not, ‘Let’s write a bunch of cheques and hand them out,’ ” says Ilka Bene, the credit union’s senior manager of human resources. “It’s designed to identify projects that don’t necessarily need a handout, but a hand up. It means that our employees are very visible in the community.”

Just as with OMERS and Softchoice, the benefit goes well beyond the modest costs. “When our staff are asked, ‘What are you proudest of?’ that’s one of the first things they talk about,” she says. “They’re really happy that we are such strong supporters of the community.”