There aren’t enough skilled workers in Canada but attracting more women to these jobs will go a long way. Here’s why the gender gap exists, and how to fix it. 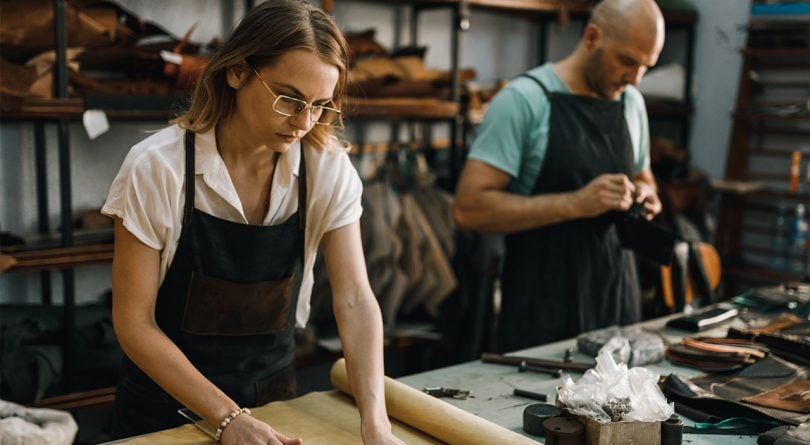 When Joann Greeley moved back to her hometown in 2004, the province was in the middle of a push to hire more women in the skilled trades. “Every second ad on TV was for [a skilled trade mentoring program],” she says. The province had also set up an office dedicated to advancing and supporting women apprentices and put targets in place for hiring at big provincial projects. For years, Greeley had worked in insurance in Kitchener, Ont., and found a job at an insurance company when she moved home. But she wasn’t sure she still wanted to do that type of work—and she knew she wanted to make more money than the $12 to $14 per hour she was being paid.

“My dad is an electrician,” she says. “And I had always helped him when I was growing up. I like hands-on work. And, I was looking for something that was a little bit more rewarding than just sitting in an office answering the phone.” So, at 35, Greeley went to trade school.

She’s one of a relatively small group. According to a 2016 report by the Canadian Apprenticeship Forum (CAF-FCA), in 2012, women accounted for only 14.2 percent of all registrations in the trades. Most women in the trades are employed in the service sector, not in the male-dominated manufacturing and construction trades—especially those governed by the Red Seal Interprovincial Standards Program. Red Seal tradespeople have been trained to the same standards across the country, allowing them to move more easily between provinces. In fact, women’s representation in many trades, including automotive service technician, electrician and carpenter, is less than five per cent. (The numbers are even smaller when it comes to women of colour. The same CAF-FCA report says, “nearly half of Red Seal trades have no visible minority women, and the other half only between one and 12 per cent.”)

And that’s a problem, because Canada is facing a growing shortage of skilled workers.

“In 2019, CAF-FCA published a labour market report that showed that from 2019 to 2023, an estimated 67,000 new journeypersons will be required to sustain workforce certification levels across the 10 largest Red Seal trades in Canada, excluding Quebec and the Territories,” says France Daviault, executive director of the organization. “Keeping pace with the demand for skills and workforce certification will require attracting 167,739 new apprentices over the next five years. The current job pool is not sustainable without concrete efforts to bring in populations that are currently severely underrepresented: namely women, Indigenous peoples and people with disabilities. We have heard from companies who have had to turn away business due to lack of resources [so] it’s a good business decision to tap into the 51 per cent of the population that are women.”

But the barriers to entry for women are well-known. There’s not enough awareness around apprenticeship and skilled trades careers, or encouragement for girls to take STEM-related classes in high school. This leads to fewer young women choosing to participate in pre-apprenticeship programs. And among those who do pursue vocational training, many have a hard time finding mentors and employment sponsors, and often have to deal with unwelcoming workplaces.

Where there are financial barriers, trade schools are working to alleviate these. “We provide free training for women in the skilled trades,” says Julia Biedermann, the now-retired executive dean at Conestoga College’s school of engineering & IT.  “These are called pre-apprenticeship programs, as they provide basic training in a particular skilled trade that will prepare the women for entering the trade and securing an apprenticeship. Conestoga has been offering the WIST-Carpentry (Women in Skilled Trades Carpentry) program for about 20 years.”

Mandy Rennehan, the founder and CEO of Oakville, Ont.-based retail facilities company Freshco, wants to take the percentage of women in these careers from four per cent to 40 per cent. She says changing the narrative is key to meeting this goal, and that simply going public about how embracing diversity has been integral to her company’s success—and how awesome female tradespeople are—has already made a big difference.

“These older guys who are instructors at trade schools will come over to me and they feel like they’re telling a secret,” she says. “They’re whispering, ‘Send us more women.’ [Now, they realize] that women show up, they’re on time, they’re strategic. When I ask, ‘How are you liking women in the trades now?’ they’re like, ‘It’s amazing. It’s great.’”

And programs specifically aimed at encouraging women to enter the trades are making a difference, too. Every year, Conestoga College holds a Jill of All Trades event for teen girls at its Cambridge, Ont. campus. The students can attend a full day of hands-on workshops and, better yet, connect with women who are currently working in the trades. The goal is for more girls to see this sector as a viable path after graduation.

The Centre for Skills Development & Training, which has locations in Burlington, Mississauga, Halton Hills, Milton and Oakville, Ont., also offers resources for women looking to enter the residential construction industry with its Women in Skilled Trades (WIST) program. Participants receive pre-apprenticeship training, as well as “gender sensitive” support around employability and workplace preparation, which is aimed at helping women feel comfortable in male-dominated work environments. Meanwhile, in Windsor-Essex County, women can also access Women’s Enterprise Skills Training of Windsor (WEST). Founded in 1984 to combat disproportionately high levels of unemployment among women, it offers workshops, training and transportation. It even offers a pre-apprenticeship program for women who are interested in becoming millwrights/machinists. The 42-week program is designed for women with no prior experience or knowledge of the trade.

Rennehan also puts her money where her mouth is – Freshco provides scholarships for students in Conestoga’s Women in Skilled Trades (WIST) programs every year, as do the Weston Family Foundation and automobile parts manufacturer Linamar.

Pre-apprenticeship programs that provide women with flexible childcare, financial aid and wraparound supports, from counselling to subsidies for equipment and boots, also help. So do employers and unions that are on board when it comes to preparing the workplace and providing meaningful support for female employees. Rennehan notes that something as simple as providing women with safety clothing that fits goes a long way. “There are safety hazards to wearing men’s clothing,” she says.

But programs and scholarships are only part of the solution. Daviault says quotas are key. “We believe that we need a collective and cohesive national strategy that has measurable outcomes and actual numerical targets, because what gets measured gets done,” she says. “Until we start collectively tracking the number of women who enter and remain in skilled trades careers, we will simply be talking about change.”

According to Greeley, these changes won’t just attract more women; they’ll make the trades better for everyone. “A respectful workplace is a workers’ issue, not a women’s issue,” she says.