A Bulletproof coffee, with extra butter 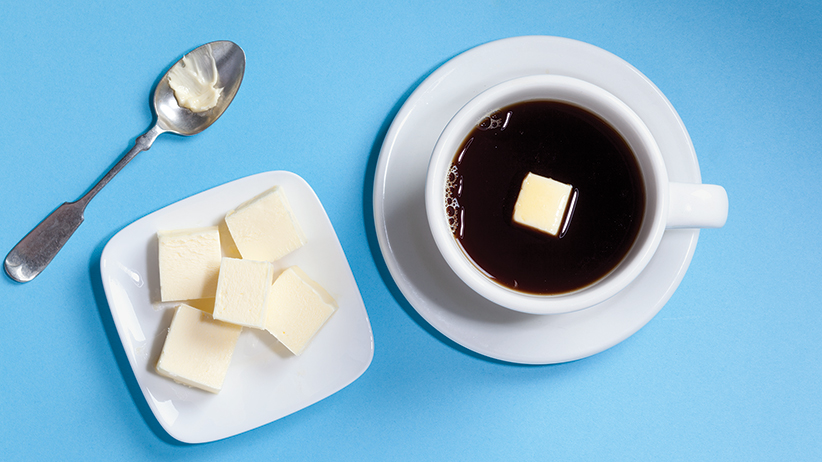 Whenever the craving strikes for a ripe and runny époisses or a wilting valençay, its core liquefied beneath the mouldy rind, I head post-haste for Toronto’s most trusted affineur, the Cheese Boutique. But, as it turns out, other customers have been besieging the place for something else entirely. “In the last three days alone, I probably got 15 emails about grass-fed butter,” confided Afrim Pristine, who manages cheese and dairy there. “In all my years doing this, I haven’t ever seen people fixated on a product like this one. The questions! What was the cow fed? When was it milked? What was her name?”

If you must know, the Cheese Boutique’s grass-fed butter came from some pur laine cows of Laiterie Chagnon, in Quebec’s Eastern Townships. Should that not be available in a store near you, keep an eye out for a new grass-fed butter from Grandview Farm, of Collingwood, Ont., scheduled for national launch close to Labour Day. And grab it when you see it—because customers are loading their shopping carts with this stuff, and keeping huge stashes in their home freezers.

Part of the reason is flavour. As you will know if you travel regularly to Europe, where most large-volume grass-fed butters are made, or the U.S., which, unlike us, allows unimpeded legal trade in foreign-made butter, there is life beyond Gay Lea and President’s Choice organic. And the grass is definitely greener on the other side of the fence. Or dairy cows think so, and are eating much more of it.

I think of Ireland’s sweet, rich, dark yellow Kerrygold—a product of a steady bovine diet of lush, green Irish grass. Or the lovely floral notes that find their way from the wildflowers in the Loire into the spring butter from Échiré. Or from the seaside pastures of Normandy into a tub of Isigny-Ste-Mère. Hereabouts, meanwhile, even “organic” butter can be legally made from milk sourced from cows who have never seen a blade of grass, as long as the soy, corn and other grain they ate was sprayed only with “organic” pesticides.

That brings us to the second reason: health. When compared to conventional butter, grass-fed butter boasts more conjugated linoleic acid and a superior ratio of omega-3 to omega-6 fatty acid. It is a healthy fat.

But something else bigger than taste and health is driving demand for grass-fed butter: that quixotically evolving, $100-billion, trend-driving blimp known as the American diet industry; more particularly, a concept promoted by American entrepreneur Dave Asprey on his website Bulletproof: The State of High Performance. According to the Bulletproof diet, you can drop 100 lb. with no exercise and only five hours of sleep (Asprey did)—and simultaneously upgrade your IQ by 12 points. It all hinges on a rather peculiar morning cuppa, for which the inspiration struck Asprey in a Tibetan monastery, some 6,000 m up the flank of Mount Kailash, where he was once served a fantastically invigorative cup of tea enhanced with yak butter.

Surely you get where this is going? Never mind, I shall spell it out. Brew one fiendishly strong cup of coffee—combining 2½ tablespoons of coffee and a single cup of water in a French press. Now, transfer coffee to a blender, add one to two tables of grass-fed butter, blend, and drink.

This was the destiny of about three-quarters of Cheese Boutique’s grass-fed butter. So I had to try it, of course, using 240 millilitres of espresso, a hand wand and some Stirling brand butter. It tastes very odd. The blending renders the mix surprisingly creamy, but the taste is all butter fat—as if you were sipping a café au lait made with whipping cream. That’s about how much milk fat you are taking in—because two tablespoons of grass-fed butter (say, 84 per cent milk fat) come out to about a half-cup of whipping cream. I drink my coffee black, so I could not finish the cup. It made me nauseated.

That said, I respect Asprey’s principal idea of starting the day with a good, strong coffee, a generous dose of healthy fat, and little else. So I have come up with a palatable new spin on the theme. Keep the double espresso. Save the butter. But take it out of the brew, and apply it instead to a crisp, fresh croissant. I don’t call it bulletproof—just civilized.