A Christmas Carol, but during the 2020 pandemic

“Has no one come to my funeral because large gatherings are forbidden in the pandemic?” The figure shook his head no. 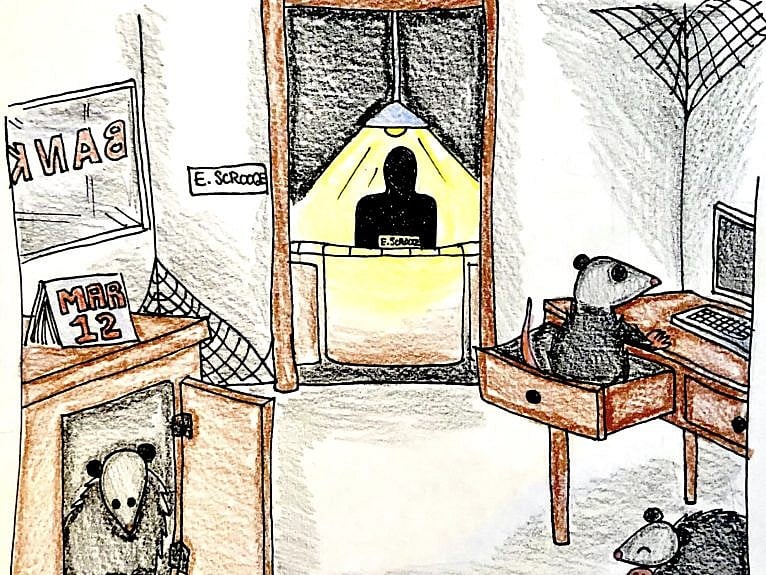 We’ve rewritten a few favourites so they better align with this year’s pandemic holiday season, including ‘How the Grinch stole a pandemic Christmas,’ and ‘A 2020 holiday song, inspired by Adam Sandler.’

Ebenezer Scrooge opened his desk drawer to grab a stapler and quickly shut it again when the family of possums that had moved in started snarling. Scrooge was the only banker in his Bay Street office, and not just because it was 9 p.m. on Christmas Eve. The human resources department had told its employees to work from home when the pandemic hit in March, over Scrooge’s objections, but he had simply been unable to do it.

Scrooge took a deep breath before logging into a Zoom call with his executive assistant, Bob Cratchit.

“Good evening, Mr. Scrooge! And a very fine evening it is, what with the falling snow,” Cratchit said.

“Bah humbug,” Scrooge replied. “I suppose you’re calling to ask for the day off tomorrow, despite the fact it will be a Friday.”

“If it’s not too terribly inconvenient, Mr. Scrooge.”

“Humbug. It’s just as inconvenient for me to give you Christmas off this year as it was the year before and the year before that. But I suppose it is the custom, so the day off you shall have.”

Scrooge left the Zoom meeting and settled in under his desk to sleep.

Scrooge awoke with a start, the possums hissing again as he hit his head on the bottom of the desk.

“Scrooge, I am the Ghost of Christmas Past. I am here to show you your missteps,” the spirit said. The lights came on, Scrooge’s computer screen flickered to life, and another Zoom meeting began.

“We shall now begin CanAcme Bank Corp.’s annual meeting for the fiscal year ending Oct. 31, 2020,” said a woman in a bouclé jacket with a severe bob. “The topline results: While our profit margin wasn’t quite as large as last year, we certainly still made a profit, and our stock price is on the way to recovering to its pre-pandemic high.”

“Fabulous,” said a man with flawless hair plugs in an expensive-looking suit. “How did we achieve such stunning results during this unprecedented disaster?”

“Where to begin!” Scrooge said, rubbing his hands together. “When the businesses we invest in make money, so do we, and Canadian businesses have certainly found some creative ways to avoid a total economic disaster. Denying paid sick leave, cutting back on emergency wage increases, layoffs, evictions… all of these have led to some nice, fat bonuses and stock buybacks, plus a stock market that’s roaring back to life. Plus, mortgage deferral programs are coming to an end and that money is rolling in once again.”

A large man with a green robe, a red beard and a crown made of holly appeared before Scrooge. “I am the Ghost of Christmas Present,” he said. “I am here to show you things as they are.”

The office dissolved, and suddenly Scrooge was standing in a cramped one-bedroom apartment.

“Honey, I’m home from the grocery store!” Scrooge’s assistant Bob Cratchit said as he walked through the door.

Mrs. Cratchit waited for him to pull off his mask and gave him a kiss. “Darling, you had that Zoom call with Mr. Scrooge on the walk over, right? Did you… did you ask…”

Bob lowered his head. “For the raise? I’m afraid not, dear. It was all I could do to get Christmas Day off.”

“But we’re due to be evicted on the 1st,” Mrs. Cratchit said. “I can’t get another job waitressing because I have to homeschool Tiny Tim, on account of his poor immune system. And that miserable old man can’t spare an extra few dollars a month?”

“Now, dear,” Bob said. “If we get evicted, we can always go live in the office with Mr. Scrooge. There are possums living in the desk drawers we can hunt for food.”

“Now, what’s all that fuss about?” said a young boy on crutches, emerging from the bedroom. “Don’t cry, mum. It’ll be alright.”

Tiny Tim pulled away from his mother, seized by a fit of dry coughs.

“I’ll take you to the test centre tomorrow, boy,” Bob said. “Kind old Mr. Scrooge gave me the day off.”

‘Are you the Ghost of Christmas Yet to Come?” Scrooge asked.

“I am afraid,” Scrooge said. “But show me nevertheless.”

A priest reading the last rites at a gravesite on a cloudy day appeared.

“Is that my grave?” Scrooge asked. The figure nodded.

“Has no one come to my funeral because large gatherings are forbidden in the pandemic?” The figure shook his head no.

“O spirit, I repent! I repent!” Scrooge said, collapsing onto his gravestone. “I will change my ways! I will be a better person! Just give me the chance, one last chance!”

The scene dissolved, and Scrooge was in his empty office once again.

Scrooge picked up his phone. “Siri? Hey, Siri! What day is it?”

“Siri, send the largest turkey at the butcher to the Cratchits. And double his salary, and send him enough money to cover their missed rent payments.

Giggling, Scrooge logged into his computer and entered a few passwords. A dialogue box reading “Cancel all debts?” appeared on the screen. Scrooge clicked “OK.”

It took a few minutes before Scrooge started hearing the cheers. He rushed to the window again, where people were running into the streets to dance in the gently falling snow. Cars were honking their horns. People were banging pots and pans on balconies.

Scrooge put on his coat and hat and walked into the elevator. His work was finally done. It was Christmas Day, and it was time to go home.