A future that never was in China 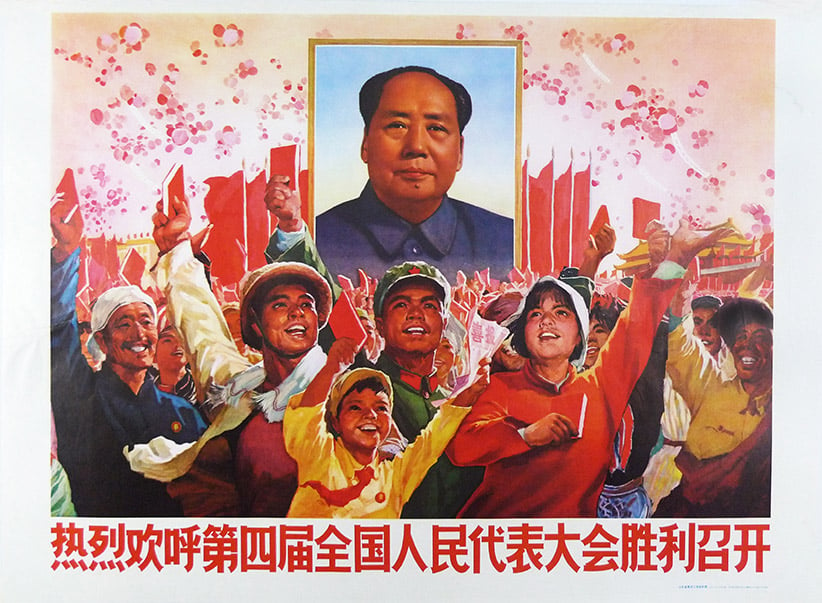 In a basement in an aging residential complex tucked away in Shanghai’s former French Concession, a short walk from fresh baguettes and salons with $80 haircuts, sits China’s most significant public collection of propaganda art: thousands of posters with beaming, red-cheeked workers and reverent portraits of Mao Zedong, an ode to a particular brand of artistry and a reminder of a history the country’s leaders only selectively acknowledge.

One poster reveals a strapping Chinese worker on horseback who gallops past a pudgy Brit riding an ox, an image promoting the Great Leap Forward—Mao’s failed attempt in the late 1950s to industrialize China. Another depicts farmers and students grasping Mao’s red book of quotations as they stretch arms upward, united in their screams for workers worldwide.

Yang Pei Ming, a 70-year-old former tour guide, started the collection two decades ago to preserve representations of the past. His neighbours laughed when he first placed newspaper ads for items they considered trash. The posters barely cost anything, but the one-time stamp collector found a new passion. He set up the museum in 2002 as a one-room operation and kept it going largely through entrance fees and poster copies. He received an official licence in 2012, after international travel guides such as Lonely Planet took notice. TripAdvisor, the popular travel website, recently gave his museum a 2015 Traveller’s Choice award. 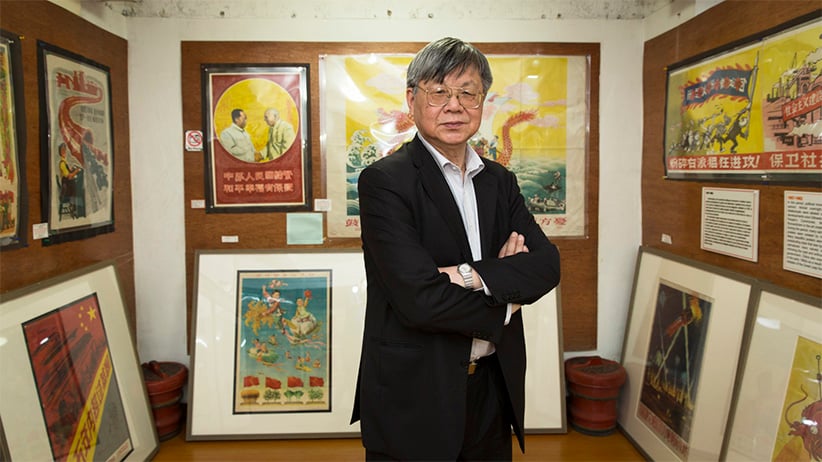 Enough foreign tourists visit the museum that the complex’s security guard hands out directions. But those who survived Mao’s tumultuous rule often don’t want to remember, and younger generations prefer to move forward. So Yang, surrounded by 6,000 prints in his apartment-sized museum, is looking outside China to help save the revolutionary art. The 50th anniversary of the Cultural Revolution this year presents an opening. Harvard University hopes to showcase some of his pieces, following exhibits in Brazil’s Cândido Mendes University and the University of Edinburgh.

Yang’s efforts are all the more striking because the collector is featuring propaganda from an era that marred his childhood and claimed his father. Authorities dragged the elderly man away during a raid on capitalists. He never returned. “You can’t escape this history,” says Yang. “It’s there.”

The Shanghai Propaganda Poster Art Centre collection spans 1920s tobacco advertisements featuring Chinese beauties through scenes of skyscrapers in the late 1990s. But it focuses most on the three decades—from the early ’50s to the mid-’70s—after Mao founded the People’s Republic of China, when poster art reached its zenith, and these vibrant, idealized images served as one of the only permitted outlets for creativity.

Related: Political panda-monium through the years

Black-and-red posters of weapon-clad soldiers and empowered youth highlight the Cultural Revolution, the bloody period from 1966 to 1976 when Mao sought to purge his rivals and reassert control by galvanizing the country around his version of Communist ideology. The effort decimated China’s economy, history and social fabric, with citizens at all levels accused of acting as “capitalists” or “traditionalists.” Millions were tortured or executed.

The Communist Party has labelled the Great Proletarian Cultural Revolution a “catastrophe,” but avoids further examination. The period receives cursory attention in Chinese textbooks. People’s Daily, the party’s main mouthpiece, this May assured, “There will not be a re-enactment of a mistake like the Cultural Revolution,” and urged people to focus on the future. Officials—caught between honouring the country’s founder and acknowledging the destruction he caused—have planned no memorials to mark the milestone anniversary.

But Harvard’s Fairbank Center for Chinese Studies is looking at exhibiting these works as part of an anniversary symposium. The images are “reminders of the misguided violence and suffering and trauma of the Cultural Revolution,” says Michael Szonyi, director of the Fairbank Center. “That is both politically uncomfortable for the Chinese Communist Party and unwelcome to many Chinese people, who are looking at the Cultural Revolution either nostalgically or as a cultural commodity to be consumed.”

For scholars and curators, the art proves captivating partly because it’s so at odds with those gruesome years. “It’s the beautiful future that never was,” says Richard King, a professor of Chinese studies at the University of Victoria, who also collects propaganda posters. “Social realism presents the world as it should be, not the world as it is…a countryside that looks healthy, industrial workers beaming, this is a world that never actually existed.”

Down the road from Yang’s museum lies the birthplace of modern China, a two-storey building where the first National Congress approved the Communist Party’s creation. Officials do not make prominent visits or highlight his collection. But they allow him to operate. And the local government has provided about $23,000 annually for the past three years as part of a grant for private museums.

Yang, a bespectacled Shanghai native, wanders through the museum in jeans and a jacket. A former tour guide for Chinese travelling abroad, now retired, he chats with visitors in English. He takes extra pride in his assortment of large, handwritten signs known as dazibao. These big-character posters, strung on walls in public places such as universities, served as denunciations of “anti-revolutionary” behaviour and displays of allegiance: “Why is there a scar on the neck of Chairman Mao in a painting?” asks one. These flimsy materials were not meant to last, and few did.

Yang has exhibited bits of his collection at a local university, and happily engages the trickle of Chinese students who wander in. But tourists far outnumber locals in Yang’s basement treasure trove.

Soviet propaganda enjoyed a resurgence in Russia about a decade ago; clothing lines with hammer-and-sickle motifs and Soviet-era menus appeared in Moscow in a flurry of Communist chic. Even today, hipster songwriters conjure up Soviet imagery, and a popular television station, Nostalgia, shows only Soviet movies. But in China, while grandmothers still dance to revolutionary songs in public squares and collectors spend heavily on commemorative stamps, many people do not embrace this period of their history. It’s understandable: Propaganda images endure, only now they take digital forms. Unlike Russians, Chinese have not experienced a full separation from—or acceptance of—the past.

“The 1950s and 1960s are still regarded as part of the [current era], so how do you rethink how to negotiate, how to reincorporate this into Chinese society?” says Xiaobing Tang, a professor of modern Chinese studies at the University of Michigan, who studies revolutionary art forms. “It’s much easier to tell a story of a break or rupture.”

Even Yang, who speaks almost entirely through the prism of art, grapples with this distinction. Officials took his father away in a 1950s campaign that targeted the bourgeoisie. Then eight years old, Yang believes they mistook his father for his uncle, a lawyer. Yang says officials claimed his father committed suicide. “From my heart, I’m not interested in propaganda,” Yang says, “because from a young age, I can’t believe what some people told us.” He views these images instead as a window, artifacts that guide understanding of a consequential era for the fast-changing nation.

The exhibit avoids editorializing, with brief introductions and titles translated into English. In so doing, these posters may offer another kind of value. If the past is a challenging story to tell, it’s equally challenging to understand modern China “in a meaningful process of change and self-renewal and transformation,” says Tang, the Michigan professor. “The posters, in some ways, serve precisely that purpose.”

Yang has no plans to sell his pieces and still needs to digitize about half. Right now, he sees a future for the genre in the curious eyes of students and scholars. Perhaps one day, his collection will move into permanent daylight.