A rather familiar voice 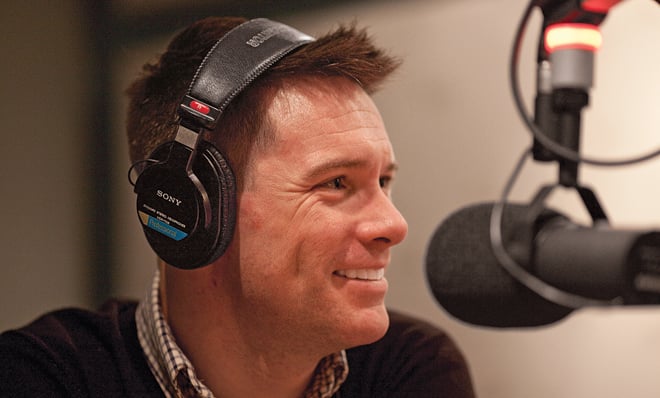 Inside the third-floor studio at CBC’s downtown Toronto broadcast centre, the lurid green countdown of the digital clock gives way to the glowing red “live” lights on the microphones. Carol Off takes a deep breath, smiles, and leans in to shatter the dead air with a cheery “Hello.” The greeting, broadcast nationally at 6:30 p.m.—a half-hour later in Newfoundland—has marked the official start of As It Happens, and the rhythm of weekday evenings, for two generations of Canadian radio listeners. It’s been Off’s responsibility for the past 4.5 years, since taking over from Mary Lou Findlay. Before her, it was Michael Enright’s, who inherited the mantle from Dennis Trudeau, who replaced Elizabeth Gray, who stepped in for Barbara Frum. But since the show debuted in its familiar 90-minute format in 1973, only two voices have played out the rest of the script, cueing the theme song, Moe Koffman’s Curried Soul. Alan Maitland’s smoker’s baritone rumbled from the radio for 19 years. Then it was the husky tones and precise diction of Stratford Festival veteran Barbara Budd for 17 more. Until this past Jan. 4, that is, when the newest member of the most exclusive club in Canadian radio introduced himself to the audience. “Good evening. I’m Jeff Douglas. This is As It Happens.”

Unlike his predecessors, the 39-year-old’s delivery will never be described as stentorian. It’s a younger, warmer sound, more the Voice of Dude, than Doom. Sometimes there’s even a touch of Hoser—“record” pronounced reck-errd, for example—grace of his Truro, N.S., upbringing. Like most people, Douglas says he has never particularly liked the sound of his own voice. Although years of performance have helped him get over such self-consciousness about his tone, or even looks (an odd worry for a guy who was frequently cast as the love interest over a 15-year TV and film career). “As you get older you get more comfortable,” he says. “I can get past myself now. I realize how to get out of the way of the story.”

Watch him in the studio, and there’s little question as to what he used to do for a living. Billboarding an interview about the death of one of the founding fathers of Nunavut, Douglas adopts a serious expression and hunches towards the mike. Seconds later, he’s grinning and gesticulating his way through a punny intro about Colombian cocaine lords’ failed effort to turn birds into drug mules. “As It Happens, the Wednesday edition. Radio that figures that first they were fitting the pigeon—and now they’re pitchin’ a fit.”

There are a few small stumbles—understandable given that he’s been on the job for less than a month. Behind the wheel during the evening commute, or at home in their kitchens, listeners probably don’t even notice. But they may hear something else—an echo of the past. It could be that some remember Douglas in his recurring role as the boyfriend on Sue Thomas: F.B. Eye, a crime drama about a deaf U.S. federal agent. Or maybe from his Gemini-award nominated stints hosting shows like Ancestors in the Attic on History Television. Chances are, however, that deep in the memory banks, most people remember the beer commercial.

A dozen years ago, Douglas’s role as “Joe” in the Molson Canadian ad known as “The Rant” made him improbably and incandescently famous. In 2000, he toured the country wearing a plaid stoner jacket and proclaiming lines like “the beaver is a truly noble and proud animal” to cheering crowds at bars, NHL hockey games and Canada Day celebrations. He appeared on NBC’s Today and CBS’s Early Show. And when he got a U.S. agent and moved to Los Angeles for pilot season, Canadian newspapers aped the commercial’s frothy patriotism, and acted like he had committed high treason.

When CBC parted ways with Barbara Budd (or “unceremoniously bounced” her, as former AIH host Findlay put it) last winter, things got messy. She publicly compared the firing to being diagnosed with cancer, and singled out Off for not immediately calling to console her. “She was sad,” says Off, who herself seems close to tears when the subject is broached. “I don’t fault her.” The network explained it wanted to head in a new direction, and advertised for a replacement with a degree in journalism. After spending nine months sifting through more than 200 audition tapes, two short lists and a dozen on-air trials, they chose another actor. The show’s loyal fan base was not amused when the announcement dropped in mid-December. “There’s no doubt that the CBC is playing cynical games,” a commenter complained on the Globe and Mail’s website. “They pushed Ms. Budd out. And now they give us Joe Canadian? I call that Budd-Lite,” railed another.

Once upon a time, it only took Jeff Douglas 60 seconds to become a national icon. How long will it be before people forgive him, and the CBC brass, for replacing another?

“I got to see the country ass to ankles. It was great,” Douglas laughs. Sitting in a glassed-in lounge just outside the studio, he’s trying to put his weird career ride into perspective. There is no bitterness about his short, intense life as Joe. The people at Molson were always “terrific,” even supplying free beer when he married his wife, Ana Marie Diez, a Colombian-born artist, in the summer of 2001. For a brief moment the commercial made him “hot” south of the border. He signed to super-agent Michael Ovitz’s stable, and auditioned for a movie role opposite Jennifer Aniston. But less than two years later, he was back in Toronto for good. “My managers’ names were Price and Skank, which to me sums up the L.A. experience so perfectly,” he says. “I just didn’t like it there. I was homesick.”

The acting slowly gave way to steadier work, doing voice-overs, and hosting cable shows. Giving it up altogether for a full-time radio gig doesn’t trouble him. “It may not have been the acting that pulled me in so much as the act of communicating,” he says.

In contrast to many Canadians, As It Happens was never a big part of Douglas’s life. He sort of remembers listening to it as a kid, but not as an adult—you’re not usually sitting by a radio at 6:30 at night on a television shoot. When the show initially came looking for him, via a recruiter, he was in Colombia on vacation. It was weeks before he got around to sending in a tape.

By all accounts, however, he was serious and professional when he got the callback for an in-studio audition. Lynda Shorten, the show’s executive producer, was particularly impressed by his intensity and concentration behind the mike. The fact that Douglas had the balls to rewrite the scripts in his own voice, rather than trying to replicate the CBC sound, really made people at the network take notice. Carol Off liked his ability to freewheel, even though Douglas got so caught up in the chat that he forgot to close out the mock show. “You can teach people to watch the clock, but you can’t teach them to banter,” she says.

That type of easy chemistry is what listeners really seemed to enjoy about the previous pairing of hosts: “A couple of crusty old broads,” says Off. It’s too early to say whether she and Douglas will ever sound as connected on the air. But she proclaims herself happy with the change. “You feel like you know Jeff from someplace. There’s a familiarity.”

In some ways, As It Happens fans have always identified more with the show’s mood than its voices. Listeners frequently mix up who worked with whom. And even Off’s mother told her she will miss Budd’s interviews, ignorant of the fact that it’s her own daughter who asks the questions. Always.

Douglas, who is on a one-year contract, says he expects to be around for the long haul, maybe even 20 years. The woman responsible for hiring him, Denise Donlon, the executive director of CBC Radio, hopes for the same. So far, the feedback is overwhelmingly positive, she says.

For better or worse, Douglas is famous for pretty much one thing. Even the CBC referenced the beer ads when it announced his hiring. As It Happens offers the possibility that Canadians might ultimately remember him as something else. A friendly voice in the darkness.

FILED UNDER: As It Happens Carol Off CBC Radio Jeff Douglas Molson Canadian The Rant