Giller Prize nominee Nancy Richler on the inspiration for her novel

Plus an exclusive excerpt from The Imposter Bride

Nancy Richler, 55, left her native Montreal for the West Coast in 1975 and returned to a very different city in 2011. That makes her one of three Montreal women shortlisted for the Giller prize. That’s no surprise to Richler. “There’s so much tension in this city—so diverse, with everybody rubbing up against each other—and I think that makes for a dynamic writing scene.” Richler’s novel The Imposter Bride, about a woman who arrives in Canada from Poland under a false name for an arranged marriage, is in part a tale of Jewish Montreal, and of Richler’s own family. Her paternal grandmother also came to Montreal for an arranged marriage, and—like Richler’s imposter bride, Lily—was rejected by her intended, only to be accepted by one of his brothers. Given that Nancy and that other Richler novelist, Mordecai, were second cousins—their grandfathers were brothers—the question arises of how close CanLit’s gene pool came to serious disruption: if the rejecting Richler had accepted his immigrant bride, would both writers have disappeared, turned into historical might-have-beens? (As it turns out, no; Mordecai’s grandfather was yet another Richler brother.) Here is Nancy Richler on the inspiration for her new novel, followed by an excerpt.

The Imposter Bride, like all my writing, started with a sentence that came into my head, seemingly out of nowhere: “In a small room off a banquet hall in Montreal Lily Kramer sat in silence with her new husband.” On one level it was a simple sentence, but as I wrote it layers of questions began building within me. Who was this woman? Why were she and her new husband sitting in silence? Where had she had come from? What had brought her to Montreal? As I wrote further, details emerged, only to raise more questions. Why had the man she was supposed to marry rejected her on sight? Why had she stolen someone else’s identity? Exploring the questions Lily raised for me proved to be the most challenging, difficult and ultimately satisfying process that I’ve experienced as a writer.

At first I set the time period of Lily’s arrival in Montreal in the early 20th century. My own grandparents had emigrated from eastern Europe around 1903, my paternal grandmother arriving in Montreal in circumstances very similar to the ones I had created for Lily. I thought it would be interesting to recreate the world my grandparents had inhabited, to explore, through Lily, what it might have been like for my grandmother to arrive in a strange city, frightened, bewildered and alone in the world, only to be rejected on sight by the man on whom she depended to build her new life. It seemed a promising premise, but the novel disagreed. It stalled. The Lily who had come into my mind so vividly began to fade, dressed in turn-of-the-century clothing and forced into the circumstances of my grandparents’ lives. As I kept rereading the first scene I had written in an attempt to find clues that might propel the writing forward I realized that what I had written resembled my mother’s descriptions of greeting relatives who arrived in the late forties having survived the Second World War in Europe, that Lily was one of those refugees and that the world she had been delivered into was not that of my grandparents, but of my own childhood in postwar Montreal.

To depict the feel of the Montreal I grew up in I had to capture the dichotomy between the external and internal world of its Jewish community, the dichotomy between the bland, essentially featureless landscape of the mid-20th-century suburbs that my characters inhabited, and the vivid, culturally rich, but also deeply traumatized inner life of a community where loss and dislocation lay at the core of so many people’s lives. I knew I had to use more than one narrative voice to incorporate a range of perspectives and tell a multifaceted story. It took seven years for all the voices to come to me and there were many times over the course of those years that I despaired of it ever happening. Patience and waiting was as much a part of the work of this novel as the writing itself. 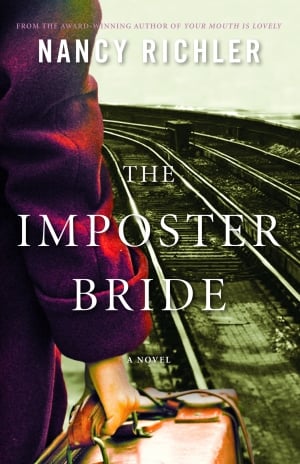 In a small room off a banquet hall in Montreal, Lily Kramer sat in silence with her new husband. It was summer and the room was hot. There were no windows and no door, only a curtain beyond which the guests—almost none of whom she knew—washed down sponge cake and herring with shots of schnapps and vodka. Lily and her husband sat on either end of the couch on which she assumed they were meant to consummate their marriage.

In front of the couch was a table laid with fruit and hard-boiled eggs. Her husband picked up a plum and rolled it in the palm of his hand. His name was Nathan and she had known him for a week. It was his brother, Sol, she had been meant to marry, a man she had corresponded with but hadn’t met, who had caught one glimpse of her as she disembarked at the station and decided he wouldn’t have her. Lily watched Nathan roll the plum in his hand and wondered what his brother had seen in her that made him turn away.

Nathan picked up a knife and began scoring the skin of the plum into sections. They had not yet touched, not even a brush of hand or lip upon becoming husband and wife. She could still count the number of glances they had exchanged, the first when she’d sat on the couch at the house where she was staying, so ashamed by the rejection at the station that she’d had to struggle to meet his gaze while he apologized on behalf of his brother and entire family.

“Your brother cannot even apologize on his own behalf?” she asked. She was surprised by her shame. Disappointed. She had no time to waste—no strength—on a man who fled at the mere sight of a woman. Or so she would have thought.

“Not even that,” Nathan replied.

“No great loss, then,” she said, forcing a lightness she didn’t feel into her voice. She had crossed two oceans to marry this Sol. She had nothing and no one to return to.

“The loss is his,” Nathan said quietly.

She had thought he would leave then, beat a hasty retreat from his brother’s misdemeanour, but he didn’t. He remained standing before her, shifting his weight from foot to foot.

“Would you like to sit down?” she asked finally.

His eyes were warm and brown; there was no pity in them. And he seemed to like what he saw. Already there was heat in his gaze.

He returned the next day to formalize their engagement. Why the rush? Lily wondered when he reappeared at the door. It was not as if she were fielding other offers, would be taken by another if he didn’t quickly stake his claim. But then she knew, thought she knew. It was the rush of colour to her face when he had first entered the room, the lowered gaze that she’d had to force upwards, her chin raised in defiance of what she felt. He had returned to banish her shame. He brought witnesses and brandy—and the same heat in his gaze. He was a lucky man, Lily thought at that moment. His desire inclined him to acts of goodness.

“Do you speak English?” he asked her that day. They’d been speaking Yiddish until then.

Her English was good, near fluent, in fact. It was her anger at that moment that made her conceal it, sudden anger at his assumption that it was she who was the more ignorant of the two—she who spoke five languages and could get by in several others, who had smuggled lives across borders he wouldn’t be able to find on a map. Rage, in fact, that it should have come down to this: if Nathan Kramer would have her, she would have him and be grateful. She, who had held all of life and death between her two hands before dying and washing up into this pale afterlife of her own existence.

“Eisenbergs,” she said, naming the family that was hosting her, Sol’s employer, whose business was buttons.

He knew she spoke English, had known from the expressions on her face as she’d followed his earlier conversation with the Eisenbergs—all in English. He had met greenhorns before, knew their nodding at wrong moments, their delayed smiles, awkward laughter, baffled eyes. There was none of that in her. She was tired, yes, after the long journey she had made, and certainly confused and distressed by his brother’s behaviour at the station, but she was not a woman who didn’t understand what was being said all around her. She understood perfectly. And yet pretended she didn’t. That intrigued him.

He had wanted her at once, had decided the moment he’d first stepped into the room. It was not her beauty that drew him. Not merely her beauty. He saw it, of course—how could one not? The fine bones of her face, the smoky blue eyes . . . But it was the tension in her, a feral tension, part hunger, part fear. It was that which had quickened his blood, that—not her shame—which had made him return the next day with his witnesses and brandy. He had not expected to find such tension in the living room of Sam Eisenberg, the Button King of Montreal. He had met many girls already in the living rooms of Jewish Montreal. Nice girls and not-so-nice, intelligent girls, beautiful girls, wily, witty, hopeful girls, but this . . . no, not this.

“Please,” he said now, holding out a segment of the plum, the first exchange of their married life.

Excerpted from The Imposter Bride by Nancy Richler. Copyright © Nancy Richler, 2012. Excerpted by permission of HarperCollins publishers. All rights reserved.