The former Montrealer and New Yorker writer recalls a time of "nascent corruption...when Donald Trump first emerged like a weed" 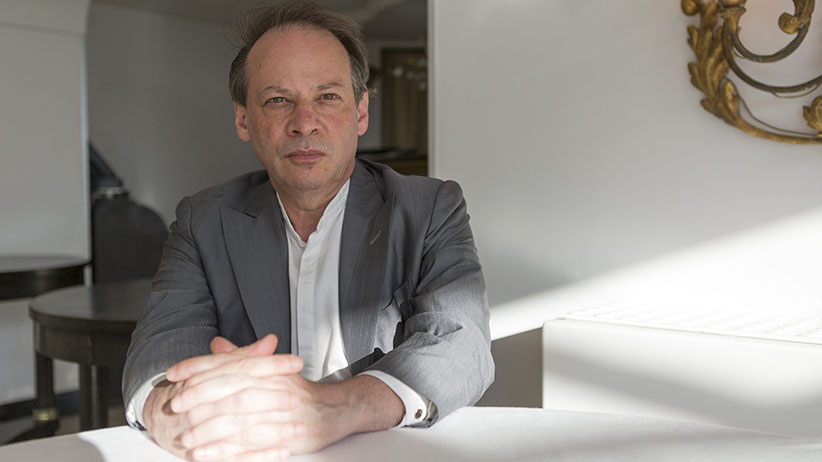 It can be hard sometimes to see just how classical an essayist Adam Gopnik is. Take a story, an arresting image really, that as much as any in his newest book, At the Strangers’ Gate, adds resonance to the title. It’s the real-life tale of a naked woman in red stiletto heels throwing 200 dead carp—her artistic material—out her apartment window at 4:30 a.m., in a desperate attempt to divert a flood of unleashed white lab rats pouring up the stairs from the flat below, drawn by the lure of a fish dinner. Yes, it was in Manhattan during the ’80s, a time and place where the line between banal and outré scarcely existed, when “New York went from being the Taxi Driver dystopia of the 1970s to a kind of nascent corruption, the period when Donald Trump first emerged like a weed,” as Gopnik, puts it in an interview. But what stands out in the finest book of the New Yorker writer’s distinguished career is how disciplined he is, how self-consciously true to his essayist predecessors.

Consider what Gopnik calls the “architecture” of At the Strangers’ Gate, the second of his works (after 2006’s Through the Children’s Gate) to take its name from a Central Park entrance. The structure contrasts “the faux-naive intimate storytelling sections and the more discursive anthropological sections.” The two literary forms then cut across the author’s twin-track narratives, one about the young Gopnik and his soon-to-be wife, Martha Parker, coming to the metropolis to create their lives, the other about what they find there. The new book is “a chronicle of lost times,” Gopnik says, “a pre-Internet age when it was as if there were only 500 people with computers that could go online and we arrivals in New York were struggling to get our fingers on one of those keyboards, a totally vanished writing ecosystem.” And it’s a love story. “I hope a funny love story and I hope a not too pious love story about how a couple becomes a family, and how strangers become citizens.” And if that wasn’t sufficiently ambitious, Gopnik adds, “I was also hoping that there’d be a kind of tension between my two tones.”

Simply put, Gopnik pulls it off, because he guards his boundaries tightly. “Memoir can either shade over towards the novel the way Mary Karr, say, does it, or towards the essay, which is the way I do it,” he says. “That’s very much the way Clive James, the Anglo-Australian writer who’s a favourite of mine, did it in his volumes of memoir. And I certainly was thinking about Max Beerbohm’s Seven Men, which is a combination of essay and retrospective, when I was writing the sections on [photographer] Richard Avedon and [art critic] Robert Hughes.”

Gopnik keeps to what he sees as the demands of retrospective—and anthropological—memoir, never veering into story for story’s sake. At certain points he almost visibly applies the brakes, whether writing (not too piously at all) about his wife or the ’80s art world, even when there was material to spare. The whole rat-and-carp episode could have gone on for pages, but its purpose in the book is simply to explain how the Gopniks acquired a “unicorn,“ an affordable, livable flat in Manhattan after five years in a nine-by-11-foot room: after the lab rats and their demented owner were finally expelled from the premises, the landlady resolved to rent to “the most normal, meekest married couple she could find.”

Instead of discursive stories, At the Strangers’ Gate abounds with brief, reader-enticing, question-begging asides, far more intimate than faux-naive. Mention of a certain street brings references to encountering Jeff Koons and Hughes along it, on separate occasions, both in tears at the loss of a son. The dead-fish artist, apropos of nothing much, remarks “The next week, I started working with hay.”

MORE: The five books everyone is talking about in September

Real estate, a preoccupation of urbanites since Babylon rose from the mud, is not as much an obsession for Gopnik as it is for the contemporary inhabitants of major cities, but it is a constant backdrop to his essays. It’s the one topic—the inability to afford the real estate that the previous generation could—on which Gopnik, 61, looking back at the ’80s, is in sync with Millennials. “I suspect that real estate anxiety is a permanent feature of youth today, as much in London or Paris or even Rome as in North America. New York is much more spread out now. Twentysomethings now end up in the farthest reaches of Brooklyn, and the farthest reaches of Brooklyn get farther and farther with every passing week. We had affordability issues back then, piled up in basement rooms in very compressed situations. But we were in Manhattan, which made our lives different because we still had that experience of density and pluralities.”

That’s not all—remember the “vanished ecosystem”—that separates the youthful Gopnik from today’s twentysomethings. He no longer writes often in the New Yorker premises, so he now shares his office there “with a terrifically talented young writer named Alexandra Schwartz. She said to me at one point when we were discussing our generations—she’s in her in late 20s, I guess—she was saying my generation was so ambitious, but [she and her peers] want things just to be adequate. What she meant was simply to find an adequate enough place, a sufficient enough job. I was struck by that and by the Lena Dunham series Girls, where the search was not for glamour or authority or the hidden secrets of Oz. There’s such a difference in expectations. We could take all those weird jobs in the old system—I was a fashion copywriter for GQ, and I knew a lot of young short story writers who were passing out canapés at parties. There was no misery involved. Everybody did something like that and everybody expected that within a year they’d have a contract with Knopf. All of that might have been delusional in the long run but it was still an operative delusion.

“My son has just graduated college in music and he’s a terrific guitar player, but all of his teachers discouraged him even more than teachers normally discourage you from pursuing something like that. There is no session work left . . . Now everything is sampled and digitized and there is no work for session musicians.” Yet Gopnik is aware that today’s young people still harbour dreams, just as their elders did. “I know kids just out of college and not one bit diminished in ambition or energy or aspirations. It just takes different forms now.”

READ ALSO: Neal Stephenson on magic, technology, and the lure of long books

On the anthropological side, most of the book is dedicated to the art scene, where the most astonishing moment came one night over dinner when Jeff Koons asked Parker, in utter sincerity, “What is irony? People keep telling me that my art has it, and I really don’t understand what it is.” It was a staggering question, given that Koons’ reputation as a master of irony has been the prime driver in making him perhaps the most commercially successful artist of his generation. (In 2014 one his five unique Balloon Dog sculptures sold for US$58.4 million.) “Chekhov says someplace that he had to continually beat the serf out of himself, and I had to—still have to—beat the art history graduate student out of myself.”

The secret to Jeff Koons, and Damien Hirst for that matter, Gopnik continues, is that what onlookers “took as being in a mode of irony—given the weird authority theory had at the time—was art they didn’t intend in a mode of irony at all. When Koons made that stainless steel bunny, shining like Trump Tower, he didn’t see it as a joke on past artists or on commodification. He saw it as an icon of its time. And that was part of its power, because he was right about that: art entraps time. But I agree we do read in irony in lots of places where no irony was intended and that was very much part of the ’80s. You could say the same thing about Trump—we all read Trump at that time as a performer and entertainer. We didn’t understand that with a crazy narcissist there is no put-on, there is no performance—it’s just psychosis going on and on.” A love story encased in ongoing social psychosis—At the Strangers’ Gate in a nutshell.