The American fans who watched the Tragically Hip's last exit

It wasn't only Canadians who flocked to Kingston, Ont., for the Tragically Hip's final concert 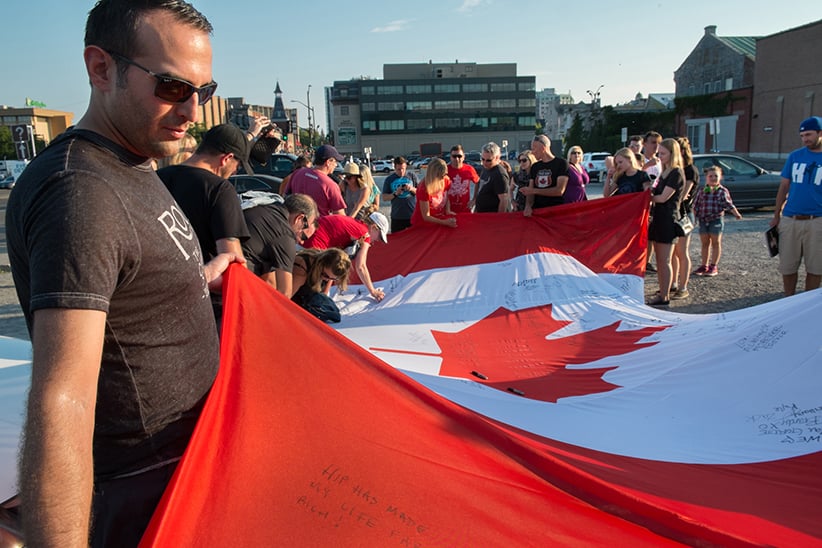 Lucas Murray (in foreground of image at far left), holding a 10 x 13-foot Canadian flag on which fans of the Tragically Hip could write messages to the band before their show at the K-Rock Centre on Aug. 20, 2016. (Photograph by J. Adam Huggins)

When thousands of Tragically Hip fans crowded Kingston, Ont.’s Springer Market Square and packed the K-Rock Centre down the road, the sense was one of a nation coming together to celebrate a band beloved by so many. As he spoke to fans who’d made long treks to downtown Kingston, Michael Barclay discovered Americans amidst all the Canadian patriotism. These are some of their stories.

Lucas Murray is from Philadelphia, and is here because “you have to pay homage to a guy who’s given so much to a generation.” Wait, what generation? How many of his Philly friends have heard the Hip? Murray was exposed in 2002, via a roommate from Halifax—“and from being in hockey locker rooms, where they were the soundtrack.” Murray goes to see the Hip every time they play Philly. “The friends I have up here [in Canada] are always jealous of the shows that I go to, because [the Hip] will play to 17,000 people in Toronto but in Philadelphia, at the Theatre of the Living Arts, they’ll play to 200 people. At the show was me, my two buddies, half the women from the Princeton hockey team, and some guys from the AHL [Lehigh Valley] Phantoms and [Hershey] Bears. Afterwards, the band came out and just sat at the bar and drank with us, and showed a genuine appreciation for who we were.”

Outside the venue, Murray is helping Jason Stanton of London, Ont., to hold corners of an enormous Canadian flag, approximately 10 x 20 feet, which Stanton bought for $100 after he made plans to come to the final show. Stanton wanted to get as many of the 7,000 attendees as possible to sign well wishes for Downie and somehow direct it to the stage during the show, “to let Gordie know he’s always in our hearts.” Indeed, during the show the flag circulated around the arena several times, as did a banner that reads, “Thank you Prime Minister Downie.” Stanton was also circulating copies of the lyrics to “Courage,” hoping he could get the crowd to sing the song to Downie during a break between encores. He didn’t get a chance. The roar of the crowd was too deafening. 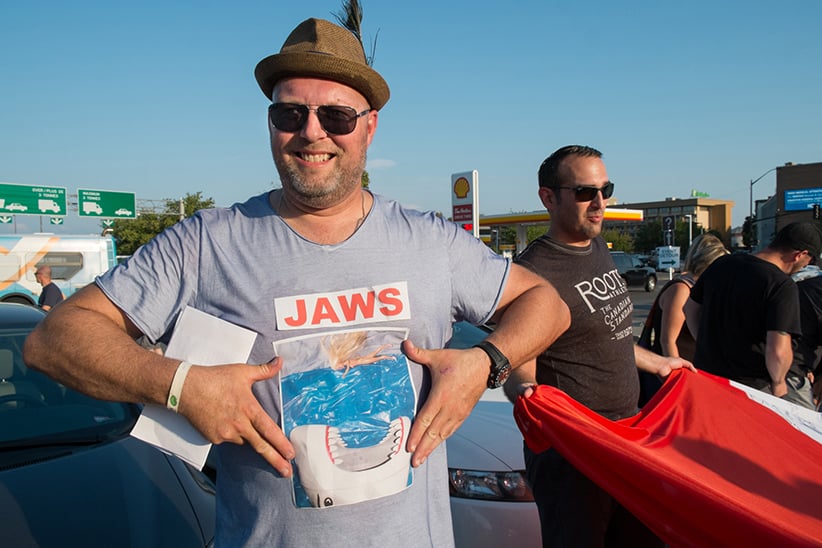 Fran and Bob Stanhope travelled from Raymond, Maine, with seven friends for the occasion. The Stanhopes, who used to be Deadheads, have seen the Tragically Hip 42 times since 1998, when they first heard them at a tailgate party skiing in Vermont. “It took three years after Jerry [Garcia] died before we found the Hip,” says Bob. “We tried a couple of Phish shows,” says Fran, “but the camaraderie with the Hip shows is a lot like the Grateful Dead.” This week, they went to shows in Hamilton and Ottawa and decided to tack on a visit to Kingston to watch the outdoor screen in the band’s hometown. They’ve seen a few shows in Montreal, but don’t normally see the Hip in Canada. “We’ve seen them in Portland, Maine, with 300 people, so why would we come to Canada?” asks Fran. This time, of course, “We knew chances were they weren’t going to do a U.S. tour.” 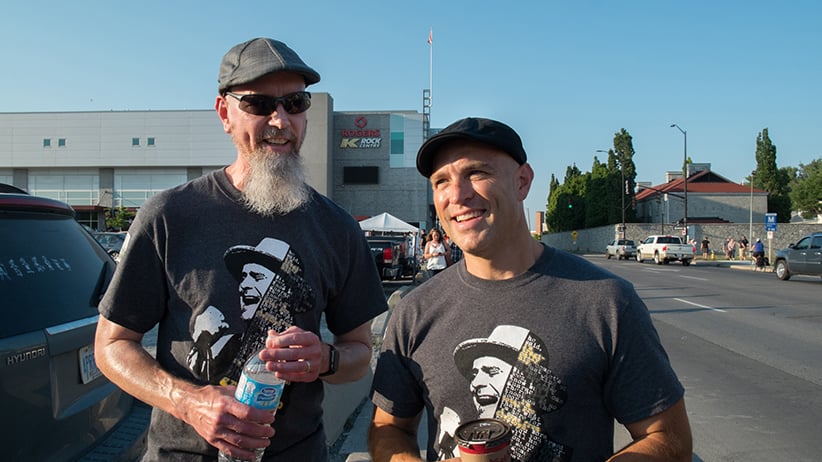 Fans of the Tragically Hip, Keith Johnson (left) and Jeff Johnson (right), wearing custom-made Tragically Hip T-shirts, on their way to the band’s final performance at the K-Rock Centre in Kingston, ON August 20th 2016. (Photograph by J. Adam Huggins)

Keith Johnson of Austin, Texas, drove up with his two brothers—Jeff of Oklahoma City, Jerome from Temple, Texas. They got tickets through two Canadian friends, Joe and Melanie Dobroski of Niagara Falls, Ont., whom they met at a Tragically Hip show in Boston several years ago. Keith’s fandom stemmed from a random discovery: he listens to a tech podcast from Canada that played a Hip song as an outro on one episode. Texas fans are not that rare: the Johnson brothers saw the Tragically Hip at the 1,000-capacity club Emo’s on a recent tour.

William Walton of Syracuse, N.Y., drove up with his daughter to watch the show in the square. He first heard the band only a few years ago, via a friend from Buffalo—where one can easily pick up Canadian radio signals. “I’ve never seen them in concert before, just on YouTube,” he says. “We’ve had a lot of cancer in our family, so we also came to support Gord. And my brother-in-law is here from Kentucky.”

Sam Baijal books the Hillside Festival in Guelph, Ont. He’s seen the Hip a dozen times, the first being a university show he booked in the late ’80s for about 400 people. One year the Hip wanted to play Hillside; Downie was impressed with the festival when he played his first big solo show there in 2002. Baijal thought the Hip would overshadow the rest of the lineup, so instead he booked them for a single night a month before the festival, with Buck 65 and the Weakerthans. Like the Stanhopes, Baijal too is a former Deadhead. “The amount of emotion that’s going on with this tour is phenomenal, and the only thing I can equate it to is Deadheads,” he says. “The actual circumstance of what’s taking place, there’s nothing like it. I think all of us are feeling a place that we’re occupying in this story.”