Andrew Lloyd Webber: Broadway's most hated & beloved figure is back

Can 'School of Rock' reverse two decades of flops for the man who used to rule musical theatre? 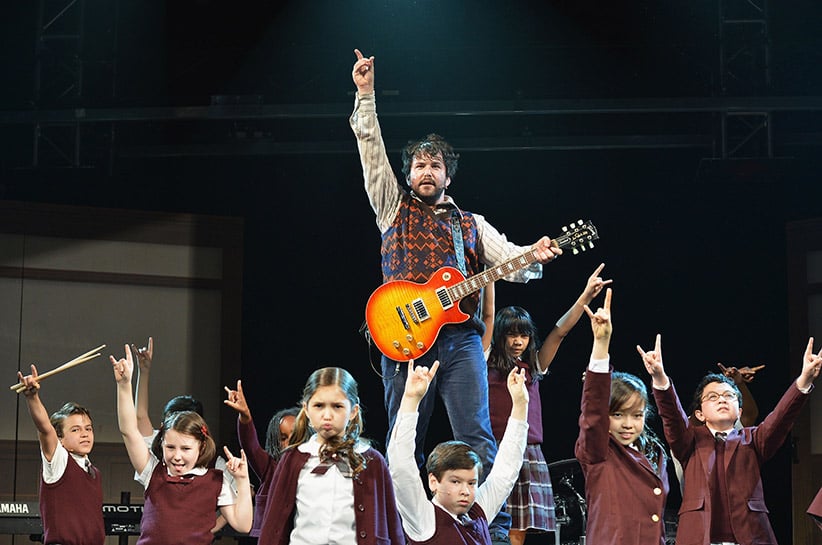 A preview performance of “School of Rock – The Musical.” (Slaven Vlasic/Getty Images)

Andrew Lloyd Webber wants us to know that he’s still around. Next Thursday the 67 year-old show tune composer will appear on Stephen Colbert’s show to plug his new musical, an adaptation of the film School of Rock, which will officially open on Broadway on Dec. 6. A musical version of a popular comedy is a rather simpler, smaller project than Webber is usually associated with, but it could be a hit. And Webber really needs a hit.

It’s been so long since Webber had a successful musical that it’s almost possible to forget how huge he was. Most of you are already familiar with some of his shows: Jesus Christ Superstar, Evita, Cats, and his last and biggest mega-hit, Phantom of the Opera. His style, combining post-rock pop music with operetta (or “popera” as some people called it) became almost the lingua franca of musicals for two decades, particularly the British and French musicals that dominated the market in the 1980s. He didn’t write Les Miserables, but it’s hard to imagine it without his example. He managed to parlay musical theatre composing into a knighthood and peerage.

But by the time he was knighted in 1992, his period of dominance was over, though Sunset Boulevard produced a couple of songs that are still belted out at auditions. For the last two decades, he’s mostly produced failures in all directions. A musical about the Profumo Affair, Stephen Ward, didn’t work out. His attempt to do for Willkie Collins’ gothic classic The Woman in White what he did for The Phantom of the Opera was a failure. He had the presumption to think he could write new songs for a stage version of The Wizard of Oz and not have them unfavourably compared with the originals. And, almost inevitably, there was an attempt to return to the scene of his greatest triumph and write a sequel to Phantom. But the best people could say for Love Never Dies is that as musical sequels go, it was probably better than Bring Back Birdie or Annie 2: Miss Hannigan’s Revenge.

None of this is necessarily very surprising. Musical theatre is a tough business with more flops than hits; it was Webber’s almost unbroken record of early success that was unusual. Still, it’s been long enough since his last hit that it might be time to start asking where he fits in the history of the form, and why it’s passed him by.

At the height of his success, Webber was hated more than almost any comparably popular figure in the world of musicals. He was often contrasted unfavourably with Stephen Sondheim, with whom he shares a birthday; he was mocked for the often mediocre lyricists he worked with after he split with Tim Rice; he was blamed for ruining musicals and turning them into gigantic tourist attractions. Cats made people particularly furious, since it was a show with no plot and no apparent point, a dazzling tour de force for Webber and director Trevor Nunn, and the perfect musical for people who didn’t want to follow a story or even listen to the lyrics. And today, it’s still easy to bash him, particularly in the British press, which recently made fun of him for running back to England from School of Rock rehearsals to cast a House of Lords vote in favour of tax credit cuts.

But now that Webber no longer dominates the field, now that he’s doing a musical that isn’t of Phantom or Cats size, it might be easier to look back on the good things he did. In particular, he managed to pep up musical theatre with the sound of contemporary music. American musical theatre writers had mostly been hopeless at getting rock and other sounds into Broadway theatres, even after Hair proved audiences were responsive to that style of music. Webber’s Jesus Christ Superster showed how rock influence could be fused with musical-theatre style, and a lot of what we consider the modern style of musical theatre singing—a mix of the Broadway belt and microphone pop—is partly a product of Jesus Christ Superstar and its many imitators.

Today, the big ticket on Broadway is Hamilton, which does for hip-hop what Jesus Christ Superstar did for earlier forms of pop, integrating it (or a slightly parodic version of it) into the theatre. By comparison, a rock musical like School of Rock may seem a bit old-fashioned. But it wasn’t old-fashioned when Webber first did it—and he’s hardly the first young rebel to wind up as a member of the old establishment. It’s just that the House of Lords happens to be an older establishment than most composers get to join.