Art in its place

I hope you’ll indulge a story from home.

Insomniac on Christmas Eve during a visit to Sarnia to spend the holidays with parents and siblings, I prowled my parents’ bookcases looking for something to distract me. I found two copies of a paperbound book called The Collection: Sarnia Public Library and Art Gallery from 1981. I knew the library part well: most Saturdays while I was growing up my dad would load the previous week’s library books into the back of his car, I’d bring my own smaller set of returns, and we’d head downtown for a refill. I’m pleased to see the library is still a going concern, with better opening hours than the two Ottawa Public Library branches closest to my house.

The art gallery upstairs was a less frequent destination, but the catalogue, published while I was in high school, confirmed my vague memory: it had a top-drawer collection, 336 pieces by 1981 including works by most of the Group of Seven, Emily Carr, David Milne, David Blackwood, Jean Paul Lemieux, Tom Thomson, Toni Onley and others. By 1994, the gallery started to outgrow its home and the Lambton County authorities moved it, in some desperation, down the street to a downtown mall which was already tanking commercially, leaving a valuable collection surrounded by dollar stores, boarded storefronts and leaky roofs. And that’s the last I heard about it all.

So I was surprised and relieved to learn that the collection has moved to a stunning new downtown venue, the Judith and Norman Alix Art Gallery, in a $10.1 million complex behind a heritage-building edifice on the main Christina St. retail drag. It looks like this: 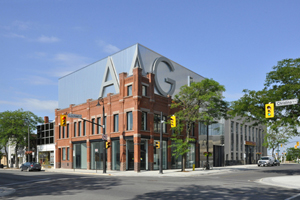 My timing was pretty good: it opened in October and I was able to visit the gallery today before its first three exhibits close in the New Year.

The top floor was filled with a touring exhibition from the Winnipeg Art Gallery and a big gallery commission, an evocative and funny installation the Montreal artist Adad Hannah made with local kids. The second floor holds items from the permanent collection: not a lot, I was sorry to see, but I’m told they’ll be rotated frequently so I’ll have to come back. This fall the display collection included Lawren Harris’ Spring on the Oxtongue River and A.J. Casson’s formidable Crescendo, along with the work most Sarnians are likeliest to associate with the gallery, Edwin Holgate’s The Lumberjack.

Part of the gallery’s story is how this work got into its collection. During the First World War a committee of the Sarnia Red Cross Society formed as the Women’s Conservation Association. They sold scrap paper and rags to raise money for the war effort. When the war ended, they kept raising money and decided to use it to buy art. They were able to get good advice so when they turned their collection over to the library board 40 years later, they had formed the basis for a serious collection. City grandees were getting ready to build a new library anyway; the original, a Carnegie Foundation library whose interior belies a lot of easy assumptions about what small-town Ontario must have been like in the early 20th century, was starting to sag, so the building I grew up with was built in 1960.

Kirsten Kilner-Holmes, the Alix Gallery’s development officer, spotted me as I walked in and told me about the new gallery’s genesis. It benefited from about $4 million in Heritage Canada money — the project had the good fortune to be shovel-ready when the feds started looking around for infrastructure projects in 2009-2010 — and a $1.5 million naming gift from the Alixes. Norman Alix got rich building scaffolding for the sprawling petrochemical plants south of downtown Sarnia.

Kilner-Holmes told me that two of the most frequent questions from my fellow Sarnians are why on Earth somebody would put an art gallery downtown, and why it reserves space for fancy out-of-towners instead of local craftsmen and -women. But while almost all the city’s retail business has shifted 5 km south over 40 years to Lambton Mall Road, the old Christina St. strip is still the city’s historic centre. And a keen interest in the best art from fancy out-of-towners is a preoccupation among some Sarnians of nearly a century’s standing. It has been easy to forget as much during what looked like the unlovely declining years of a once-important gallery, but sometimes worthy projects get a chance to live again. The gallery’s story is almost as old as any story Sarnia has to tell, and it’s a better story than most. Learning about it was a highlight of my holiday trip home.