A brief history of 'jazz hands'

They didn't start with Justin Trudeau. And they probably won't end with him, either. 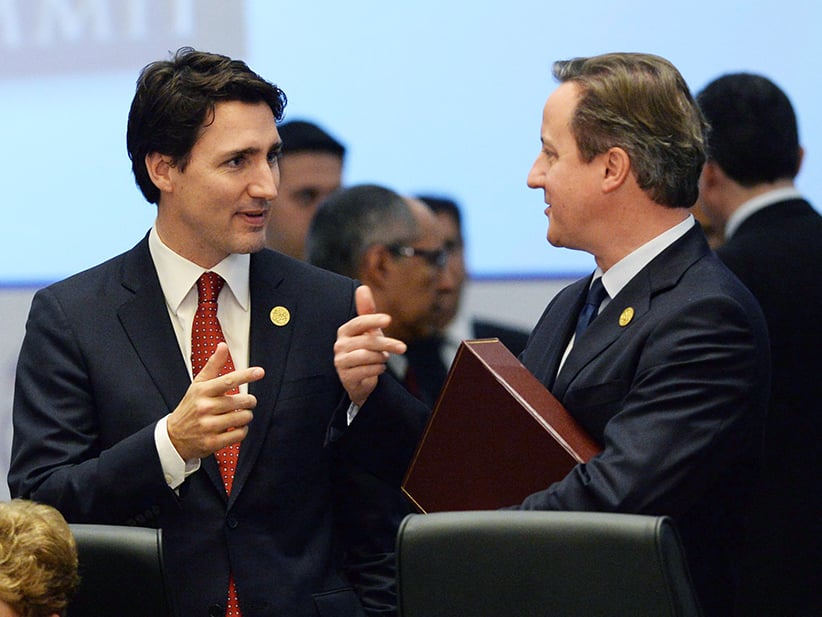 Prime Minister Justin Trudeau talks to British Prime Minister David Cameron at the start of a plenary session at the G20 Summit in Antalya, Turkey on Sunday, Nov. 15, 2015. (Sean Kilpatrick/CP)

You might have seen that clip of Justin Trudeau, our new Prime Minister and all-around happy dude, doing the gesture commonly known as “jazz hands.” What he was trying to communicate is a matter for his biographers; what might be worth getting into briefly is where this gesture comes from.

We’ve all seen people do jazz hands—where you stick your hands up and out, and wave them a bit—in musicals. The man TV Tropes would call the “trope codifier” is choreographer Bob Fosse, whose dances depended as much on precise gestures as on actual dance steps. The famous opening number of his musical Pippin begins with just a bunch of disembodied jazz hands in the dark, and even after his death, the jazz hands lived on in shows like the revue Fosse and the movie version of Chicago. Jazz hands are often a conscious or unconscious Fosse tribute.

But the gesture, like many, goes back to the vaudeville days, and a lot of people think it may really have entered the public consciousness via the first famous sound movie, The Jazz Singer, where Al Jolson frequently sticks his hands up, palms facing the audience. That gesture is more of a faux-hug, or a request that the audience should love him as much as he loves them, but the point is that performers like to use their hands to emphasize the rhythm, and that there’s some kind of special magic in the palms facing outward.

The movie Bring It On, which came out in 2000, not only helped introduce a new generation to the joys of peppy, campy choreography, but helpfully explained the difference between jazz hands and spirit fingers. To the untrained eye, spirit fingers look pretty much the same except that you wiggle your fingers instead of waving your hands.

If jazz hands were just a choreographic move, though, there wouldn’t be so much excitement whenever someone is caught using them outside of a dance number. The Internet helped to turn jazz hands into a meme, with people semi-ironically posting “jazz hands!” to show how excited they are, or identifying when cute kittens seem to be using the gesture (this is sort of a cousin to the online tradition of posting cats that look like Hitler). Like many Internet traditions, it’s now a meme that exists almost for its own sake—so when a world leader happens to do it, he gets a lot more attention than he would for a move that hasn’t gone memetic.

We may see more of jazz hands in the future in one respect: they’ve been suggested as a possible substitute for clapping, which can be too noisy and disturbing for some audience members. Some groups have tried to substitute snapping instead, but snapping is often seen as more threatening than clapping. Jazz hands, on the other hand, can never threaten anyone, except those who prefer spirit fingers.

So when Trudeau does jazz hands, he may simply be using them as a way of performing happiness: the gesture has caught on as a half-sincere, half-ironic way of showing that you’re happy or that you approve of something. Football players have been seen doing it, and comedian Michael Ian Black recently called for more jazz hands in politics. It could be that this is just Trudeau’s way of proving he’s a forward-thinking politician. Or maybe it’s just something he does to make up for the fact that he’ll never be as good a dancer as his father.