A cultural renaissance is blooming in Canada, led by Black and Indigenous artists

Laila El Mugammar: At its centre is public art, literature and more. The Canada emerging is one where I am visible. 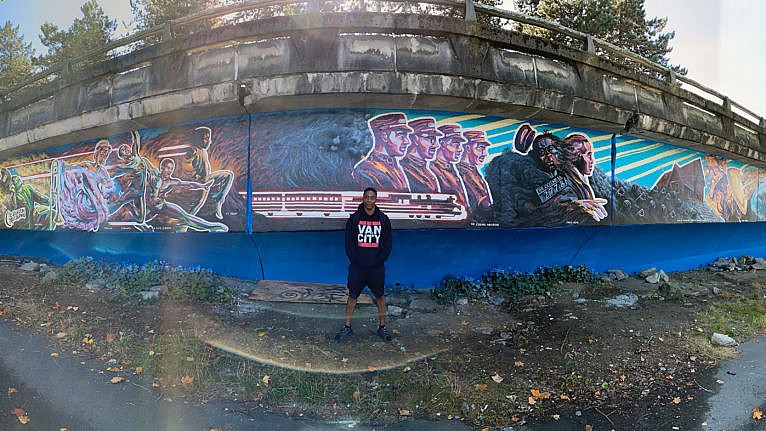 Joseph in front of his mural, 'Hope Through Ashes: A Requiem for Hogan’s Alley' (Rochelle Leung)

Laila El Mugammar is a Sudanese-Canadian writer and student. Her academic and creative work maps the historic Black presence in Canada.

On Gaukel Street in Kitchener, Ont., perpendicular to city hall, a black bear greets pedestrians with watery and speculative eyes. Makade Makwa. Near her, a frog crouches, its back glimmering and pale in the sunlight. Omakakii. Beside him, a wolf lifts a slender snout to serenade a star-filled sky. Maengun. These animals are brought to life in modern, muted renderings on the painted pavement by illustrator and muralist Luke Swinson, a Kitchener resident and member of the Mississaugas of Scugog Island First Nation. His murals live on the street and on social media, where Swinson provides the Anishinaabe names for the subject of every work. An LRT ride away from the bear and her friends, fish illustrated in vibrant cyan swim freely through flora, circling a golden sun. According to Oneida artist Alanah Jewell, the mural represents “community, ceremony and belonging.” In addition to being the artist behind Morning Star Designs, Jewell is also the parks and engagement associate for the City of Kitchener. Her goal is to connect with other Indigenous people, organizations and leaders to understand how Indigenous people would like to access park space and land. Her art can be seen reclaiming public spaces across southern Ontario. 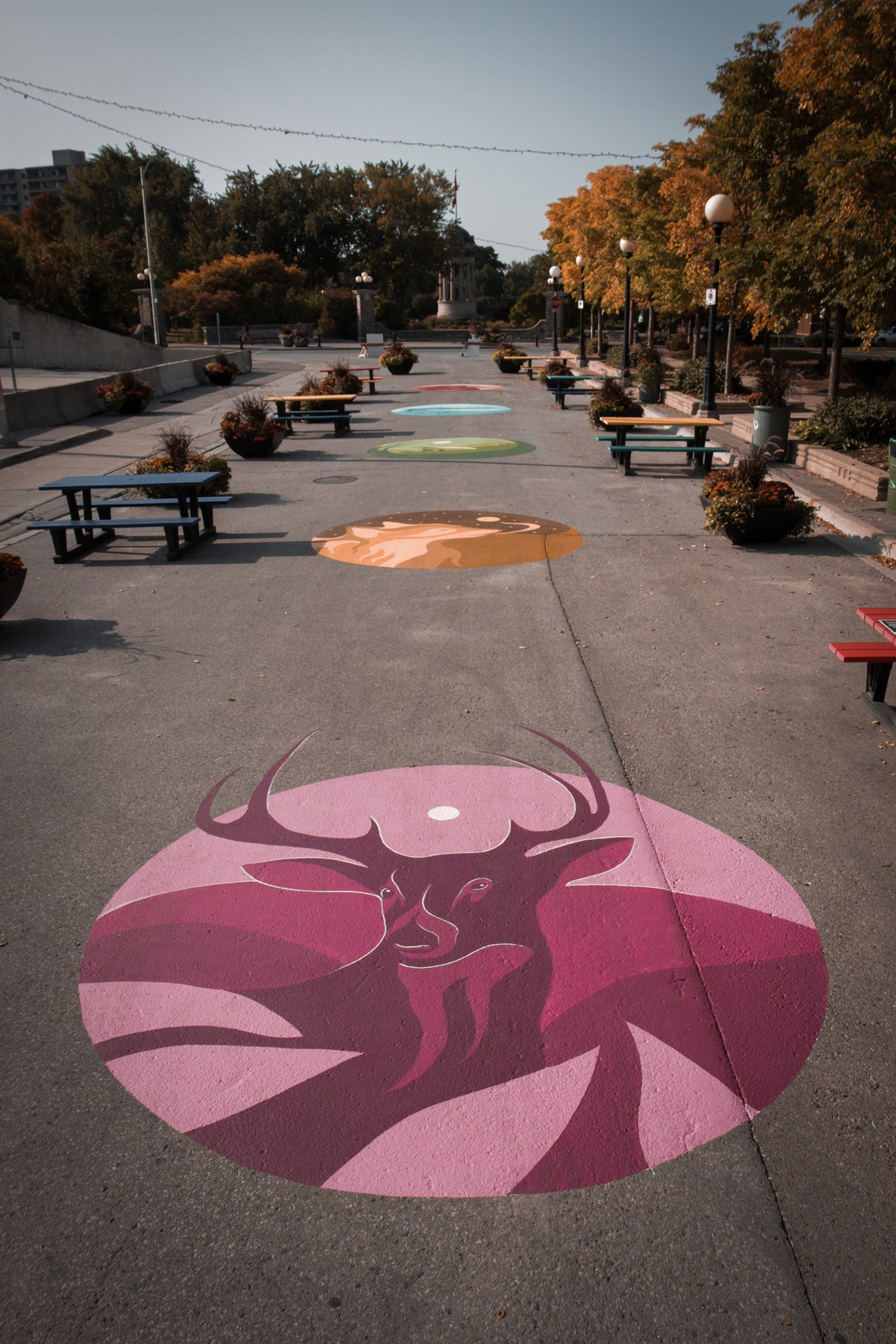 Swinson’s mural in Kitchener, next to City Hall (Luke Swinson)

On the other side of the continent, a similar placemaking is occurring. Black railway porters stand at the ready, waiting to service an oncoming train. They are part of a continuum of Black entrepreneurs, musicians and athletes illustrated in glorious colour, inhabiting 45 m of the side of the Dunsmuir Viaduct in East Vancouver. Hope Through Ashes: A Requiem for Hogan’s Alley, by muralist Anthony Joseph, was born during the Vancouver Mural Festival in September. The work gives permanency to the memory of Hogan’s Alley, a historically Black settlement in Strathcona that was levelled in order to make space for Vancouver’s viaduct system. Joseph reclaims the viaduct and, in doing so, resurrects the Black presence where it had been so violently expunged. The master’s tools contest the master’s house. As of 2018, the viaducts were slated for demolition in favour of a ground-level road system, and over 12,000 residents—a quarter of whom are in social housing—are expected to inhabit the new “Hogan’s Alley” that will emerge.

These are just a couple of glimpses of the blooming cultural renaissance being spearheaded by Black and Indigenous people in Canada.

Though Black people have been settled in Canada for centuries, historical accounts of Black life are largely missing from our national narrative. We inhabit the negative space of the cultural mosaic, our history slumbering in the cracked and yellowed grout between the Underground Railroad and Aubrey Drake Graham. From Hogan’s Alley to Africville in Halifax, there has always been a vested effort to restrict Black placemaking in Canada. Black Canadians have always resisted this. Robyn Maynard’s Policing Black Lives and Desmond Cole’s The Skin We’re In, which both reveal the grim realities of Black life in Canada, are national bestsellers. Black Canadian writers such as poet Dionne Brand and theorist M. NourbeSe Philip now appear on many high school and university syllabi. The movie rights to They Said This Would Be Fun: Race, Campus Life, and Growing Up by the young Black writer Eternity Martis were sold at auction to Boat Rocker Media. I myself was published, though I never thought it possible. I optimistically hope that, going forward, credence is given to Black intellectuals and artists whose work disrupts the idea of Canada as a racism-free space. 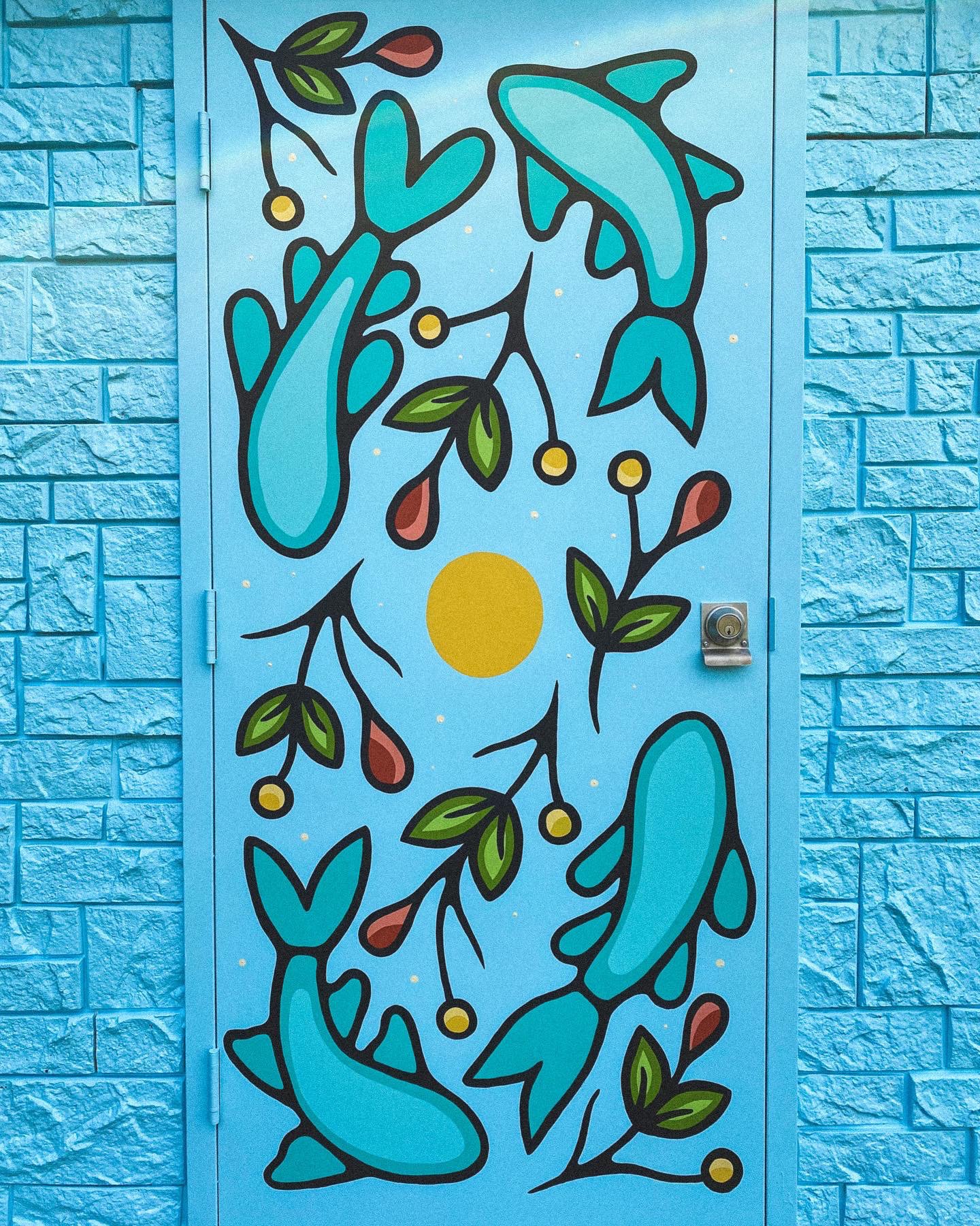 And while government policy continues to retrench Indigenous placemaking in Canada, Indigenous writers and artists continue to prevail. The works of Tuscarora writer Alicia Elliott and Inuk writer and throat singer Tanya Tagaq were made compulsory reading during my time at the University of Guelph. The continued brilliance and resilience of Indigenous writers transcends parochial constructs of age and genre. We Are Water Protectors by Carole Lindstrom mobilizes kindergarten students to stand up to the “black snake” whose venom “burns the land” and makes the water unfit to drink. Katherena Vermette’s graphic novel series A Girl Called Echo disrupts linear time and makes historical events such as the Red River Resistance accessible to youth. Volume 3 was released this year, and I eagerly await Volume 4 in the year ahead.

I am still unsure where I fit in this burgeoning cultural renaissance, but the sense of belonging I feel makes me overwhelmed with gratitude. The Canada emerging is one where I am visible. I only hope that, in 2021, this rebirth and reclamation of physical and intellectual space in the arts will flourish, and that new generations of artists continue to be inspired by the strength and resilience of their predecessors.

This article appears in print in the January 2021 issue of Maclean’s magazine with the headline, “Rebirth and reclamation.” Subscribe to the monthly print magazine here.