A new Louvre is set to open—in the desert of Abu Dhabi?

Having rented its name from the famous Paris landmark, the Louvre Abu Dhabi will open after a long wait and plenty of controversy 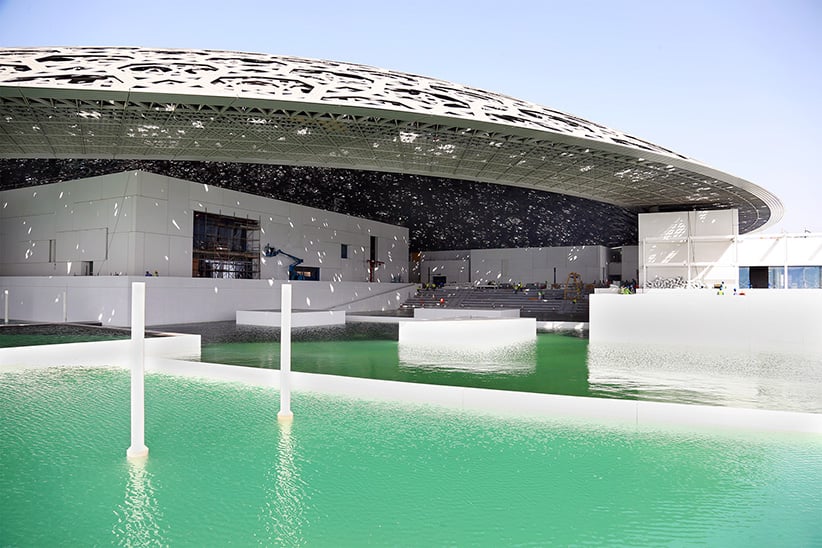 Almost a decade ago, the Louvre in Paris announced a massive collaboration between the French government and oil-rich Abu Dhabi to create “the first universal museum in the Arab world.” The agreement states that, for three decades, the Louvre, the Musée d’Orsay and the Palace of Versailles will loan hundreds of pieces of priceless art to the United Arab Emirates for display at a new, French-designed space on Saadiyat Island, a developing tourist entertainment hotspot 500 m off the Abu Dhabi coast. Either fittingly or offensively, depending on your perspective, the museum is named the Louvre Abu Dhabi.

The project has not gone smoothly. Almost immediately, nearly 5,000 museum curators, art historians and archeologists signed a protest letter complaining of everything from poor worker conditions to selling out. “Our museums are not for sale,” declared the online petition, although implying otherwise was the $567 million paid by Abu Dhabi for the use of the Louvre name on Saadiyat Island. Named for the Arabic word for happiness, Saadiyat is a 27-sq.-km playground that includes luxury hotels, golf courses, the New York University Abu Dhabi campus and the Guggenheim Abu Dhabi—which will be 12 times as large as its Manhattan original. Like Saadiyat’s Louvre, the proposed Guggenheim faced a backlash; protesters with the Gulf Labor Artist Coalition (in tandem with Occupy Wall Street) launched a parody website full of scathing critique. The “Plan Your Visit” section, for example, was swapped with “Rethink Your Visit.”

Grassroots protests, however, hardly compared to the much larger financial hurdles that lay ahead. Originally scheduled to open by 2012, construction of the Louvre Abu Dhabi slowed and then completely stopped during the global economic crisis. Moreover, the much-hyped design—a futuristic white roof reminiscent of a flying saucer and designed by French architect Jean Nouvel—proved much more difficult than the relaxing desert stroll that inspired it. The roof, called the “Rain of Light,” features 7,800 pieces of stainless steel and aluminum in eight interlocking layers to provide shade from the blazing sun and allow a breeze off the Persian Gulf. “This museum is really a museum that belongs to the place,” head architect Hala Wardé told CNN, “to its history, geography, culture and climate.”

Who exactly the Louvre Abu Dhabi is catering to has been a topic of much discussion and debate. Rumours circulated that exhibitions with religious iconography or nudity could be rejected or, if they were displayed, could court controversy rather than admiration in the conservative Islamic United Arab Emirates. To address this next problem, program manager Hissa Al Dhaheri began the Talking Art exhibitions—as “a way to get the public involved, interested, keep them up to date,” she told the New York Times—by presenting the first 19 acquisitions. Among them, an abstract composition by Piet Mondrian, Madonna and Child by Bellini, three works by Édouard Manet, a Buddhist sculpture from China and a 14th-century Mamluk holy Quran. Then French president Nicolas Sarkozy and Abu Dhabi Crown Prince Mohammed bin Zayed Al Nahyan attended the flashy event.

Three hundred more pieces were secured in October 2014 and announced with the museum’s new expected launch the following year. But 2015 instead brought an 82-page report from Human Rights Watch (the third of its kind, following a five-day worker strike in 2013). So though the dome was finally done, the launch date moved again to late 2016. Last September, French national Manuel Rabaté was named the new museum director and with him came some good news: the Louvre Abu Dhabi “will welcome visitors in 2017.” Just 10 years and $650 million later—assuming all goes well until then—visitors to Saadiyat Island will finally learn if the Louvre Abu Dhabi was worth the wait.

Maclean’s looks toward 2017 and the Year Ahead. Read more stories here.