A Tribe Called Red plants a flag for the Halluci Nation

Tim '2oolman' Hill on residential schools coming to the fore, the importance of Gord Downie's 'Secret Path' project, and the meaning of the Halluci Nation 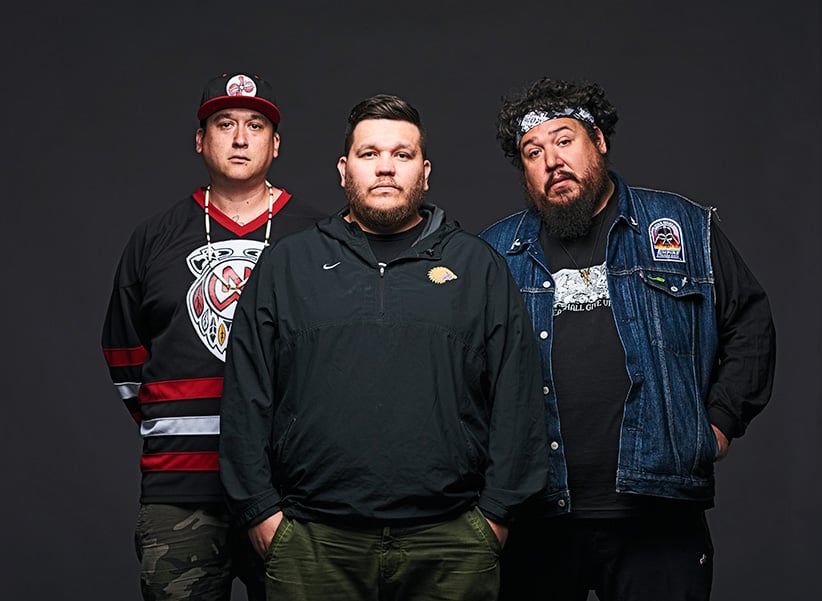 For those who have had enough of 2016, A Tribe Called Red’s latest album, We Are the Halluci Nation, offers a welcome antidote to frothing xenophobia, dying icons, and people standing like mannequins. It’s the sound of outsider voices demanding change, and dancing in the face of fear with the spirits of the dead.

The Tribe trio of producers Bear Witness, Ian “DJ NDN” Campeau, and Tim “2oolman” Hill all grew up on Ontario’s Indigenous reserves, and We Are the Halluci Nation, in part, rails against the haunting legacy of Canada’s residential schools. Along with the Secret Path project by Gord Downie and the novella Wenjack by Joseph Boyden (who contributes spoken word to the album), the album has helped focus mainstream Canada’s attention on reconciliation and reparation. But the album has a broader scope, too: It’s a concept record about the “Halluci Nation,” an invisible “tribe” dreamed up by the late U.S. Indigenous writer and activist John Trudell (whose voice appears on the album too) that resists the dominant, exploitative “ALie Nation.”

The trio’s sound has also expanded, weaving layers of rhythm and texture over their formerly sparse, thumping electronic/acoustic “powwow step” style. Hill recalls making beats in airports, hotels, and fishing lodges on tour from L.A. to New York to Australia to northern Norway, and collaborating with musicians they befriended on their travels. Among these are Indigenous artists from Sweden, Australia, and Canada’s Arctic (Tanya Tagaq), as well as outspoken rappers like Yasiin Bey (formerly Mos Def), Saul Williams, and Shad. This international cast has opened doors, and Tribe are currently touring North America on the back of ecstatic reviews, from the Indigenous press to Pitchfork, which calls the album “critical listening for everyone.”

Just before the tour, Hill, who joined Tribe in 2014 (replacing DJ Shub), spoke with Maclean’s about fighting ignorance, finding strength in numbers, and whether they think Justin Trudeau will follow through on his political promises.

Q: John Trudell describes the “Halluci Nation” in part as “the tribe they cannot see.” Is it conceptually a “nation” that anyone could belong to without a passport?

A: At the beginning, the Halluci Nation was fictional, but when we put the record out and John’s words were resonating with everybody, it started to become a real thing. You couldn’t possibly culturally appropriate it: it’s a place where everybody’s invited, for like-minded people to go, to share ideas or advocate for change in this world.

Q: You have artists from other Indigenous communities and other countries on the album. To what extent do you feel that there’s a shared experience that’s reflected in the music?

A: After touring so much and seeing all these different cultures and Indigenous people, we learned that we share a very significant cultural part of our life that’s a lot deeper than just colonization. I think it has to do with our connection to the Earth, to old ways that we’ve had forever. There are ceremonies and dances in Australia that are very similar to ours. If they were to do them back where I’m from, it would blow minds.

Q: Leonard Sumner’s verse on “How I Feel” is a particularly powerful in addressing colonization in Canada: “It’s a nation with racism / Here since the start of it / Hard to let go / ‘Cause it’s carved in the heart of it.”

A: That inspired the entire record. It was a great idea that we tried to meet halfway—trying to produce something that had a sense of urgency and seriousness to it, and danceable as well.

Q: Many Canadians have come to know Chanie Wenjack’s story through your album and Gord Downie and Joseph Boyden’s work. Does the extent to which people are now actually talking about the legacy of the residential schools surprise you?

A: I’m really surprised every day, because this isn’t new to us. We had an interview with somebody in Toronto about a month ago who’s been in media for as long as I can remember, and he said, “Last month was the first time that I learned about residential schools.” And I’m like, “Wow. I had no clue.” To hear someone educate themselves and just call themselves out on their ignorance has been really eye-opening.

For years, this has been swept under the rug. It definitely is something that Canadians need to talk about, and it’s great to hear it happen in this way, through the arts. What Gord has been doing has been very heavy, because in his last days, he’s deciding to spend his time talking about this. He’s doing it in the right way, working with the families. The attention that it’s been getting has been pretty mind-blowing; it does instil a little bit of a hope.

Q: How much hope do you have that Prime Minister Trudeau is going to make the changes that Downie asked him to make?

A: We’ve been through this before. Promises were made and broken. I have to see results. I don’t necessarily have hope anymore when it comes to that, but the hope that I’m talking about is in Canadians themselves. There’s a shift in consciousness amongst all of us. We want to evolve; we want to do what’s right. We want to include everybody. Whatever Trudeau wants to do … Basically Gord alley-ooped it to him. All he has to do is dunk it—follow through. If he does that, that’s great. If he doesn’t, that’s not the first time we’ve been lied to. [Laughs]

Q: You did a “rez tour” of six reserves last year. Were those particular shows special to you?

A: I grew up on Grand River. The night before [we went there], we played 20,000+ in Toronto at Nathan Phillips, for the Pan Am Games, and when we went home, it was my favourite show of all time. I saw people that I knew if they were at a concert, they’d [usually] be sticking to the wall, not dancing at all. My community is not really about that life. The same thing with me—I can enjoy myself just sticking to the wall and nodding my head. But to see everybody explode, dancing the entire time … We were in our community hall, full of maybe 700, 800 people. It was sweaty; it was loud; it was amazing. Hopefully we can hit other reserves, because as soon as we did those, all of them from across Canada were like, “When are you coming?”

Everywhere we went, we engaged with the community. I’m hoping that people learned or got inspired. People tell me sometimes that I have a lot of young people watching me—every accomplishment or failure. It’s not necessarily pressure, but it’s great that they know I’m trying my best. And to know that it’s very possible for a kid from Six Nations to tour the world, doing something that he loves.

Q: What with the recent election results, how do you feel about touring in the U.S.?

A: I pray for my friends who are out there, who feel that they just elected somebody who hates them. To elect a guy like him who is very upfront about his misogyny, his bigotry—as a person of colour, that is very, very frightening. Us not going there [wouldn’t] solve anything. We’re going to have to get through this together.

It’s a complete 50/50: Them against us. It has to do with a frame of mind—not necessarily white people versus people of colour. There are still [white] people that care and fight for those rights. We’re all going to have to play our part in keeping the change going. Right now it seems like there is no hope, but the younger generation has grown up with a black president, and they’ve seen a woman running for president; this is maybe their first experience of a rich white guy doing it, let alone a celebrity who used to be the executive producer of Celebrity Apprentice. I think the younger generation looks at racism now as something ugly. We got set back a lot, just by this election alone. Now’s the time to really take that apart—we can’t half-ass this.

Q: There’s a power and a fierceness to We Are the Halluci Nation. Do you hope that your music might have something revolutionary in it, and that it might inspire people to change things?

A: Art is a great way to express views and start a conversation and dialogue. I think we’re about to see a lot of that, not just from us but from a bunch of people, in the coming months and years. Also, as much as music is a form of communicating in that way, it’s also a form of happiness, a form of healing, a form of venting.

Q: For years, Tribe have been calling out sports teams on racist names and logos based on Indigenous stereotypes. Seeing as the Cleveland Indians lost the World Series—after leading three games to one—was that karma?

A: I see it more as an open opportunity to finally change that mascot. There’s no time like now. Like I said, there’s a change in consciousness. Look at Chance the Rapper, one of the biggest hip-hop artists right now, saying, “You going to finally change this? What’s going on?” People are fed up. [Laughs] But yeah, I hope it was karma.