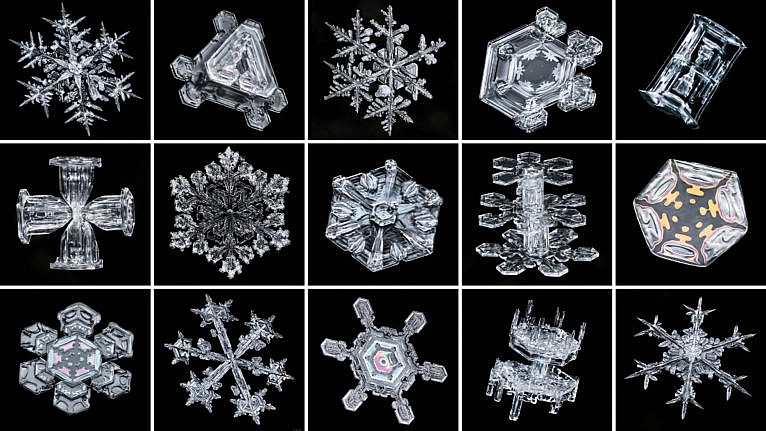 There’s a simple explanation for why Nathan Myhrvold, the former Microsoft chief technology officer, could be found at a Yellowknife hotel last year in the dead of winter, reaching out from the balcony with a black foam board attached to a painter’s extension handle that he’d just bought from Canadian Tire. He was trying to catch snowflakes.

More specifically, Myhrvold was hoping to capture the highest resolution photograph of a snowflake ever taken, with the help of his custom-made 100-megapixel camera system that includes a thermoelectric cooling system, artificial sapphire lens, carbon-fibre frame, freezer-tested linear stage and special LED lights from Japan.

But the snow wasn’t falling close enough to the hotel balcony, he recalls, laughing. “So we’re out there waving this cardboard thing at the end of a three-metre painter’s stick. We kept wondering if someone outside might call the police.”

What sounds like a sketch from The Red Green Show turned out to be one moment of improvisation during an extensively researched journey that Myhrvold had embarked upon, years ago, in his hometown of Seattle. He spent 18 months designing and custom-building a specialized snowflake camera. He travelled to Alaska, the Northwest Territories and northern Ontario in search of the perfect snow crystals. And when he unveiled his work last year, he gained international recognition for accomplishing the feat he’d set out to achieve.

READ: Photo essay: ‘Rooftopping’ is the new trend in photography

But in the process, the former tech executive unknowingly irked a renowned snowflake photographer who lives in one of Canada’s most prolific snow belts—someone whose work Myhrvold admires, but who figured he could one-up the American with little more effort than it would take to step outside his back door.

The hardest part about snowflake photography is finding great snowflakes. “It’s like finding birds in wildlife,” says Kenneth Libbrecht, a physicist at the California Institute of Technology. “You can go to where they are, but that doesn’t mean you’ll find them.” Libbrecht would know. Originally from North Dakota, he spent decades studying snowflakes; or, more accurately, the molecular dynamics of ice crystal growth. He gets a kick out of telling people he was the “snowflake consultant” for Disney’s Frozen. For those who believe the received wisdom that no two snowflakes are alike, Libbrecht has news: in his laboratory, he tinkers with variables like temperature and humidity to make “designer snowflakes”—including identical twins.

Libbrecht figures he’s determined the optimal temperature to produce stunning snowflakes. The most sought-after, picturesque ones—snowflakes that look like six-branched stars when viewed up close—appear around -15° C, whereas flakes formed at -5° C look like columns and needles. “It has to do with the molecular dynamics of the ice surface, temperatures where the molecules have enough mobility to grow in a certain way,” he says.

Libbrecht himself is an avid snowflake macro (or extreme close-up) photographer. When he wanted to find the optimal location to photograph for his first book, he bought an in-depth guide to weather and climate in Canada. The ideal place would offer frequent snowfall, allowing one to witness multiple days of snow; but it must snow lightly enough that the flakes don’t collide on their way down, creating un-photogenic blobs. And it can’t be windy. In wind, snowflakes break up.

That’s what first brought Libbrecht to Cochrane, Ont., near Timmins, decades ago. There, in the birthplace of Tim Horton, Libbrecht found the largest snow crystal ever photographed—just over 1 cm long from tip to tip—something even he has trouble replicating in his lab. “Cochrane never lets me down,” he says.

Myhrvold first became interested in what he calls the “typically ignored beauty of snow” after attending a public talk Libbrecht gave about 15 years ago. He had retired from Microsoft and was pursuing passion projects, including his love of photography. He founded Modernist Cuisine, a food innovation lab, where he became known for photography that deconstructed dishes with surprising beauty. But it would be another decade before he turned his technical acumen toward snowflakes. “I knew it’d be hard,” he says. “You can’t take snowflakes back to your studio.”

He got to work on building a camera for the challenge, using carbon fibre for the microscope frame to minimize expansion and contraction when temperatures change. The high-end LED lights allowed the flash to be as short as one-millionth of a second—very bright but very brief, because too much light can melt a snowflake. He created a special platform, or “linear stage,” that allowed the camera’s lens to move by less than a micron at a time. That’s about one one-hundredth the width of a human hair. The microscopic lens itself was made out of artificial sapphire, whose thermal conductivity is eight times that of glass, so it would chill quickly and not melt snowflakes.

But Myhrvold couldn’t build the perfect snowy day, which is why he’s travelled to the Northwest Territories, Alaska and Timmins—where last winter, for a fleeting moment, rare 12-armed snowflakes began to fall. “For some reason I didn’t get a good shot of one and then, poof, they were gone,” he laments. 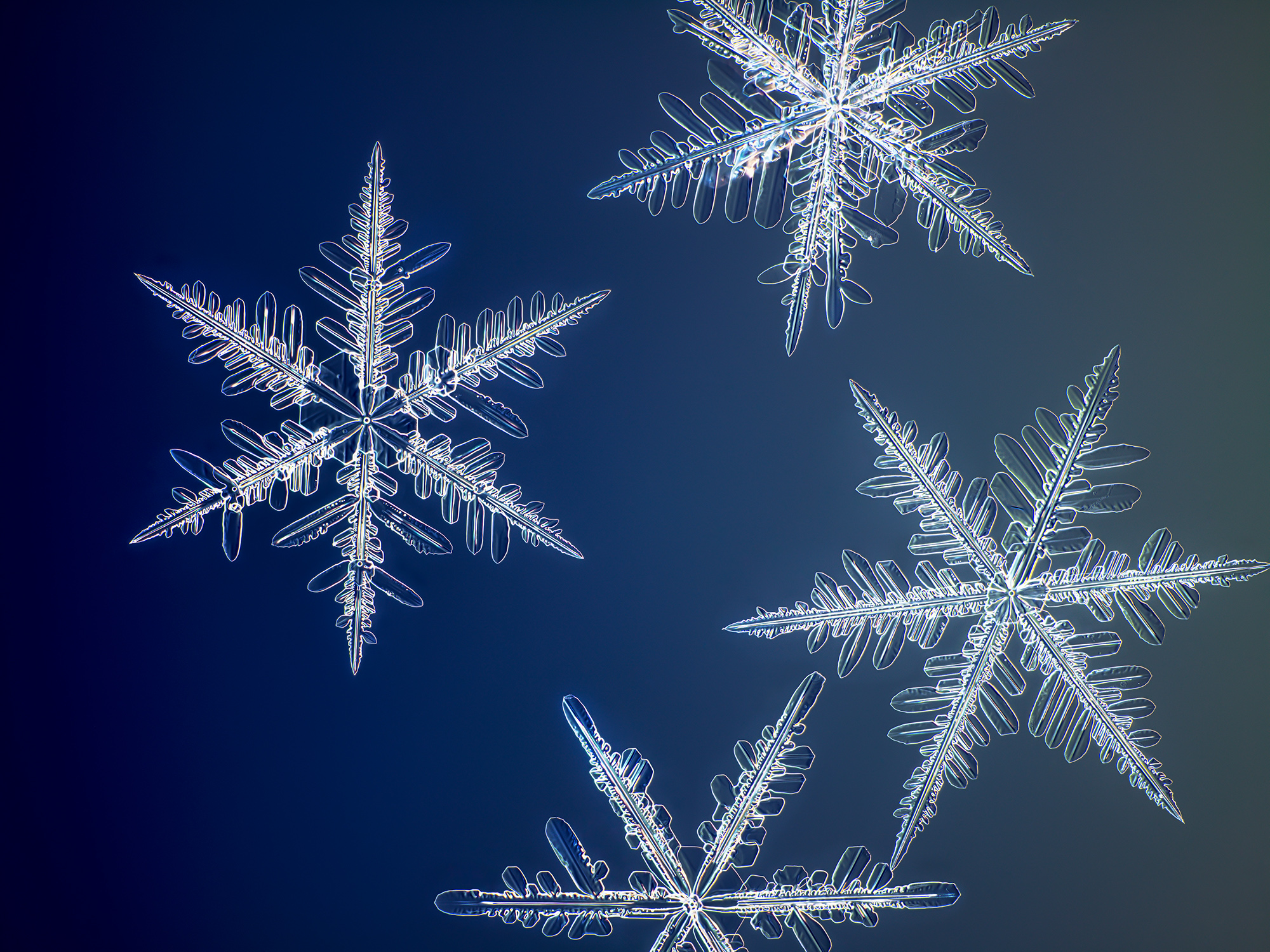 Still, his final products were unveiled in November though his Modernist Cuisine Gallery and he soon attained renown for having taken the highest-resolution snowflake photo on record. That’s when Don Komarechka, a photographer who lives in Barrie, Ont., started getting emails from friends.

Komarechka had written the book on snowflake photography, from the science behind it to techniques. His work is featured on Canadian currency, including a one-ounce $20 Royal Canadian Mint silver coin. He found the headlines about Myhrvold’s achievement slightly irritating. Most articles he read credited the well-connected American photographer with the record unquestioningly, but there is no official arbiter of snowflake-photo records. And the raw image had not been publicly released, so there was no way for a neutral party to verify the claim.

READ: How royal photographer Chris Jackson gets those perfect shots

So Komarechka decided to take an even higher-resolution photo of a snowflake, using a high-end, off-the-shelf camera he holds in his hand. He did so during a live webcast of his YouTube show, Photo Geek Weekly, and half-jokingly proclaimed himself the new record holder, at 187 megapixels. Komarechka then uploaded the entire raw photo file online and declared it to be in the public domain. There were caveats: it’s not a particularly good image—the snowflake appears broken in parts—and Komarechka used a snowflake he had preserved earlier in a solution that made it hold its shape like a fossil during the shoot. He could easily have done the photo with fresh flakes harvested in his backyard, he says, where Komarechka figures he’s seen every variety of snow come down. “I just have to wait for the right moments,” he says. “I might get a dozen good snowfalls each winter.”

But all of this overlooks an important point, he adds: “Resolution does not equal quality.” Nor, importantly, does pixel count equal resolution. Arcane factors such as diffraction and the nuances of optical systems also come into play, which is one of the reasons Komarechka questioned Myhrvold’s claim. It’s also why Myhrvold is standing firm: when all those things are considered, he believes his is still the higher-resolution image.

The two photographers’ respective bodies of work are both stunning, if not entirely alike. The Canadian catches his snowflakes on a black mitten knitted by his grandmother, and takes pictures using reflective light. With macro photography, it’s impossible to get the entire subject in focus for a single photo, so Komarechka spends upwards of five hours on the computer, piecing together his images like a puzzle, to get one entire flake in focus. Myhrvold, too, uses anywhere from 20 to 100 photos of a single flake, the focus changing ever so slightly for each frame, to get a final product of perfect clarity.

They may yet see eye to eye. Though the two have never spoken, Myhrvold is a fan of the Canadian’s work; he bought Komarechka’s book to help his own photography. And Komarechka says it’s great to have more photographers involved in his arcane pursuit.

Libbrecht, meanwhile, agrees that if Myhrvold claims to hold the title, he should share his full-resolution photo file with someone who can verify it. But the scientist offers one observation on the urge to capture one of nature’s wonders at ever higher resolution: “There’s not a tremendous amount of difference to see.”

This article appears in print in the March 2021 issue of Maclean’s magazine with the headline, “When ‘let it go’ just won’t do.” Subscribe to the monthly print magazine here.