At the National Gallery of Canada, art in—and for—a time of crisis

Paul Wells: How Canada's national gallery and its director, Alexandra Suda, have been working to 'keep the doors open' to new art and new realities 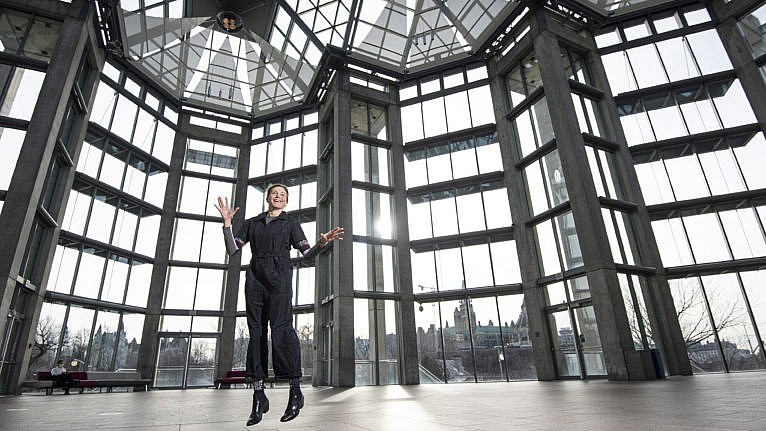 Suda, director of the National Gallery of Canada, in Ottawa on Dec. 17, 2020 (Justin Tang for Maclean's Magazine)

Somebody once said anecdotes are the only evidence. I wanted to write about Alexandra “Sasha” Suda, the director of the National Gallery of Canada. I wanted to contrast the difference between the year she expected—her first full calendar year running the nation’s flagship visual-arts institution—and the year she wound up having instead, which in many ways was the same gong show we all lived through. But first I asked her about a big orange painting she’d shown on her Instagram account. She took me upstairs, to one of the gallery’s largest display rooms.

The paining is Middle Passage, a riot of billowing orange and red cloud, in acrylic and ink across a square of canvas three metres on a side. The artist is Frank Bowling, a Guyana-born British painter, whose formative years were in New York City in the ’60s and who was knighted this year by Queen Elizabeth.

Suda came here a week earlier to see Middle Passage with her children. To get to know it, really. “We were here for about an hour, basking in its sunlight. We got all dressed up.”

The setting is propitious. Middle Passage, which is a promised gift from Winnipeg financier Michael Nesbitt, hangs in Gallery C-214, next to the most hallowed and sometimes controversial works of Abstract Expressionism in the National Gallery’s collection: A Mark Rothko, a Clyfford Still, an Agnes Martin, and a handful of stark Barnett Newmans, including Voice of Fire, whose 1989 acquisition sparked one of the National Gallery’s greatest controversies. This makes sense: Bowling was a contemporary of the AbEx gang, exhibited with them, exchanged ideas with them. That he’s only now joining the others as the first Black artist in a room that’s become, “in many ways, the inner sanctum,” as Suda put it, is to some degree a case of the gallery catching up to the culture.

Rothko and Newman favoured simple shapes and uniform fields of colour. In Middle Passage, Bowling has more to tell you: a map of Africa is visible, and human faces, all half-obscured amid the clouds. The painting evokes the murderous Atlantic shipping routes of the 18th- and 19th-century slave trade. Compared to the taciturn works beside it, it’s practically chatty. “It renegotiates your expectations,” Suda said.

It’s been a year for renegotiated expectations around here. When the Trudeau government appointed Suda in early 2019, she was the highly-regarded chief curator of European art at the Art Gallery of Ontario, but she was youngish and untested, having never directed any arts institution. When she spoke to John Geddes for Maclean’s a year ago, she had some new ideas for increasing visitor traffic, a solid slate of summer shows, and a few years to make her mark. Three months later the building, and most of surrounding society, shut down on a few hours’ notice.

For weeks after, the National Gallery alternated between implementing contingency plans that had been drawn up in January and February, and improvising a path forward. Suda started giving virtual tours of the building on Instagram Live. She and a camera operator would wander through the eerily empty building, discussing the sculptures and paintings. The online tours acknowledged, and barely began to resolve, a yearning for the in-person experience that any arts institution’s patrons know well.

In mid-July the gallery reopened to the public on Thursdays through Sundays. Gallery visitors are used to restrictions on where they can stand, after all. By December 50,000 people had visited. On two weekends the numbers were comparable to a year earlier, but instead of tourists almost all the visitors were local. So that was a big objective ticked off Suda’s to-do list, quite by accident—”to reset our relationships with the communities we exist to serve.” Beginning with the hometown crowd. “We want to be more than just the place people bring their in-laws to, once or twice a year.”

Another goal will just have to wait. Suda had hoped to boost total attendance past the levels set by her predecessor Marc Mayer, about 400,000 visitors a year. That will take years now. Even after it’s safe, people will probably be leery of crowds. But raw numbers weren’t the goal anyway. “I’m not going to bring in a mummy show to get more foot traffic.” She hopes the National Gallery of Canada can draw audiences with art that’s good and doesn’t shy away from hard topics. The Indigenous contemporary-art exhibition Abadakone, which had been in the works before her arrival, was an early highlight for Suda and an audience success. In May, pandemic permitting, the gallery will host the first major Rembrandt exhibition in Canada since 1969.

Much has changed since 1969. It’s harder now to ignore that Dutch art’s “Golden Age” was an ornament of an imperial culture’s economic upper crust. While Rembrandt is in town, the gallery will prominently display new works by two young Black artists, Toronto’s Tau Lewis and New York’s Rashid Johnson. “They’re going to be offering alternate narratives to this notion of a Dutch Golden Age… unique contemporary installations that you can think about in connection with Rembrandt.”

You can’t really just hang an old master any more, or you can’t only do that. COVID-19 is hardly the only crisis that’s rocked the art world in 2020. The Black Lives Matter aftermath of George Floyd’s death “rocked the museum sector,” Suda said. Executives or institutions that have seemed awkward or reluctant to change have paid in turmoil. The National Gallery of Canada has had to play catch-up too. Just before a 2019 exhibition on Paul Gauguin opened, Suda and her staff changed some title cards to reflect awkward or appalling realities in Gauguin’s life. A reference to his relationship with “a young woman” was changed. She wasn’t a woman. She was a 13-year-old Tahitian girl.

“And then this notion of us as a white supremacist institution, which is the kind of language that’s circulating now, comes to life for people,” Suda said. “Nobody was out to do the wrong thing. But I think we were a little bit scared to have those tough conversations, because it’s hard to do. And I’m not saying that I’m the expert in it. I have a PhD in 15th-century manuscript illumination from northern Europe. [But] I think every work of art offers that invitation to see it differently. And it’s our job to keep those doors all open.”

“I think there might have been a time when a big institution like ours framed the story for people. Those days are over. Not for us, but for art within society. I think when somebody comes and says, ‘You’re wrong about that label, and by the way, you triggered trauma within the friend I was with and you’re doing harm,’ instead of being defensive, we have to kind of relax and understand that it matters what we do. People care. So how do we keep their attention and incorporate their story in here?”

The answer to that one won’t be the work of a weekend or a season. It will become one of the lenses through which Suda’s tenure at the gallery will be measured and evaluated. The year 2020 was quite good at replacing the work people thought they had ahead of them with other, often harder and more important work. “There will be a robust discourse” around the role of art in society, Suda said. “Period. Whether we think we can hide from it or not, it’s going to happen. And if we’re not prepared to engage in that conversation, then we shouldn’t be museum professionals.”