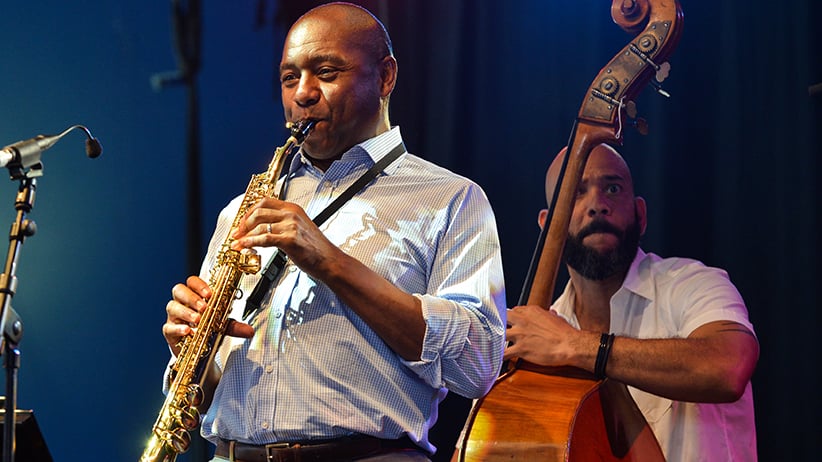 Saxophonist Branford Marsalis is playing in Ottawa this Saturday to open the Music and Beyond Festival. In the first half he’ll perform as a soloist with the National Arts Centre Orchestra, playing Alexander Glazunov’s concerto for alto saxophone. After intermission the orchestra will clear out and Marsalis will play jazz with his quartet.

He’s appearing more and more often as an orchestral soloist lately, but does he often do this thing where he plays both classical and jazz in the same night? “No, I don’t do it ever, really,” Marsalis told me the other day over the phone from his home in North Carolina. “No one else ever asked me to do that. So it never happened.”

Is it hard to switch between classical and jazz contexts? “It used to be more difficult 10 years ago when I first started playing [classical music], because I had to marshal so much of my brain to focus in on playing. Everything was just so fast, you know. Now that my brain is able to process the information, slow it down a bit so it’s not as bad as it used to be, you know, my focus is better. I don’t feel as overwhelmed in that environment as I did 10 years ago.”

Some people might be surprised that for the three-time Grammy winner, who first rose to public notoriety in his brother Wynton Marsalis’s quintet more than 30 years ago, it’s the classical music that poses a challenge. After all, classical music is written down, you get to rehearse every note before you perform for an audience — what’s the problem?

My question was intentionally naive, designed to provoke, and it worked a charm. “Well, most people that would say that know absolutely nothing about classical music,” Marsalis said. “They don’t understand what it’s like to be in that pit. The similar thing would be, I’ve had the joy of watching people watch soccer and say, ‘What’s the big deal? You run around. You kick a little ball. It’s not like American football where you’ve got to hit people and you’ve got to do this.’ And I say, ‘Well let’s go play.’ I called a friend of mine in California, we joked about it. We went out to play. And none of us was good but we were playing. And he said, ‘I gotta tell you man, I’m humbled. I didn’t think I was going to survive it.’ And I said, ‘Well, that remains to be seen, man. That’s just the first half.’ ”

Similarly, the challenges of notated music may seem overrated, if you spend your life improvising — but only so long as you don’t actually take on those challenges.

“The myth about classical music is that jazz is always improvised and classical music is always written in stone,” Marsalis said. “Well… I mean, all music is like all language. The Canadians and the Americans and the Australians and the New Zealanders are all bound by a common language. Or should I say, we are separated by a common language.” Inflection and cadence are personal, context is cultural, and all of it can introduce nuance into a conversation, whatever the langauge.

“How long or how short you make a word, how you make a word, changes the context of the word. How much emphasis you put on a certain word. It’s like the old comedian who did variations on the word ‘Dude.’ It’s like, if you’re excited, you say ‘Dude!’ If somebody does something [messed] up, you say ‘Dude.’ It’s one word and it has all these meanings. That’s the beauty of music.

“The idea that a note that is simply written down is not improvised — I mean, it provides a source of comfort for the musically untrained, I’m sure. ‘Well, you guys may be great players but you’re playing the same s–t all the time. But our music is different every time.’ Whereas a lot of jazz is so repetitive, there’s almost no improvisation in it at all. With classical music, if it was all the same, you could buy multiple versions of the same piece and it would sound like carbon copies. And it doesn’t.”

We’ve been having these conversations, at intervals of a few years, since I was an undergraduate at my campus newspaper in the late 1980s. If you ask Marsalis a question about music, you always get a thoughtful answer. That’s been the constant in our discussions. The context has changed again and again. The first time we talked he was on tour with Sting. In 1992 Marsalis made his debut as the bandleader on Jay Leno’s Tonight Show. He quit a few years later, scalded by the realization that TV isn’t nearly as fun as it looks, and that while he was doing TV on the West Coast he was losing contact with his son on the East. He moved back to New York, then to Durham. He keeps a lower profile these days, if you can call frequent solo performances with the world’s best orchestras a low profile.

“TV helped me understand some things. I’m not really an entertainer. I show up in entertainment circles from time to time and I enjoy my time there… but I need to be in environments that allow me to be me.”

Since the early ’90s, the environment that has most reliably ensured Marsalis a wide range of expression is his quartet. Its original members were Kenny Kirkland on piano, Robert Hurst on bass and Jeff “Tain” Watts on drums. (Well, there was an earlier version of the quartet, but it always sounded like it was waiting for something to happen. The band’s vision coalesced when this edition released the album Crazy People Music in the early ’90s, and it was this band that moved to L.A. with Marsalis to launch the Leno show.) Kirkland passed away, Hurst left, and finally even Watts, whose ferocious rhythmic complexity was at the heart of the quartet’s sound, departed in 2009. Pianist Joey Calderazzo and bassist Eric Revis have been in the band since the late ’90s. Drummer Justin Faulkner came into the band from high school when he was 18; he’s 23 now. Basically nobody had heard of Faulkner when Marsalis hired him; now he’s an in-demand sideman in a bunch of bands and an audience draw.

Another naive question: Is this, in any sense, the same band as the one he had 20 years ago? Is it like George Washington’s original axe, whose handle has changed three times and the blade four? “The philosophy of the music is the same. We’re just better at it. It’s clearly not the same band — none of the same musicians are in it — but the philosophy is pretty much the same. You study some music; you go out and do the record. You do one take, two takes tops, and the record is either a validation of your improvement, or you’re just standing still, or you’re regressing. Those are the three options. And we’ve definitely gotten better.

“The problem with jazz is, when you start getting better, fewer people are going to like it. Because it starts getting sophisticated in a way where people start saying, ‘What’s going on?’ ”

Here, Marsalis seems to draw a distinction between his own band’s music, which can get pretty wild and complex, and a more generalized affliction in a lot of other bands in today’s jazz. “The musical skill level of jazz players has depreciated in the last 50 or 60 years, even as the virtuosity has increased threefold,” he says. Translation: There’s a lot of harmonic virtuosity and instrumental skill on offer, but other virtues have gotten lost. “It’s about information — the musician’s ability to execute information that corresponds to chord changes — not about emotional content. There’s no context to it.”

This is the part of the interview that generally gets Marsalis in trouble in certain corners of the jazz community, all the more so because he can plainly take or leave the jazz community. “Modern jazz guys are like, ‘I’m gonna innovate this thing, I’m gonna develop a system.’ All these things that lay people generally have no interest in. [They] hate and are bored to tears about [this]. And the jazz writers support that. They’re doubling down on stuff that ultimately won’t be successful in a commercial sense. And they give out awards… It’s a train wreck for me to watch. They blame radio, they blame pop music. I think it’s the musicians. I just think we do a horrible job of communicating about this music on an emotional level.”

Our conversation wraps up, but Marsalis recalls an anecdote he’d saved up for me, one that conveys his subtle distinction between “information” and a more basic understanding of what matters at a human level. “There was this Ornette tribute concert in Brooklyn.” Here he’s describing a tribute concert to Ornette Coleman, who was one of improvised music’s greatest innovators in the 1950s and 1960s. He’s 85 now, and hasn’t been well. But it was a special night. “And Ornette played for the first time in two years. It was great.”

Afterward, Marsalis says, he ran into an acquaintance who was sad that Coleman’s saxophone sound wasn’t as strong and in-tune as it used to be. “I said, ‘Man, you are the textbook example of why people hate this s–t.’ It’s basically information analysis that’s devoid of context.” Who would analyze Coleman’s tone and not pay attention to the moment?

“When you are so bereft of any kind of basic understanding of humanity that you can’t see how great it was to see a man who knows that he has dementia and his brain is not right, to feel so great about himself in that moment that he would go out on stage for the first time in two years and perform in public — does it matter whether the s–t was in tune or not? Henry Threadgill was there, David Murray was there, [Joe] Lovano was there, Ravi Coltrane was there, Geri Allen was there” — here Marsalis is rhyming out a list of jazz royalty since the mid-1970s. He adds a very different name, just to show the breadth of the musical talent on hand. “Bruce Hornsby was there. It was a great night.”

Then, recalling the deprecating comments of his acquaintance who mistook information for understanding: “And that’s what he said.” I can almost hear him shaking his head. “That’s it in a nutshell.

“So squeeze that in there.”