Canada to the Tragically Hip: 'We got your back, guys' 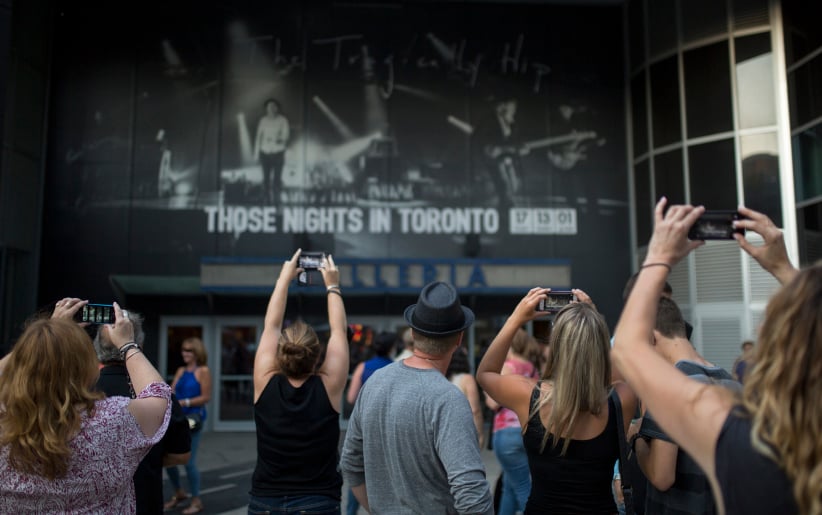 Our friend and fellow novelist Bill Loehfelm flew from New Orleans to join us for the Tragically Hip’s second Toronto show on their Man Machine Poem tour last Friday night. Bill’s a big fan, and he knows the Hip are Canadian legends, but still he was shocked and amazed by the sheer size of the roaring crowd, more than 20,000 strong, every person in the ACC sending the band their love vibes. The last time Bill saw a Hip show with us was years ago when the band played to a rabid group of maybe 900 in a barn of a bar outside of Houston. Bill reminded us of how, after the Houston show, Gord Downie made him a cup of coffee on the tour bus. And now, here is Gord performing in front of us in a metallic leather suit, a magical apparition come to life, literally radiating white light, so many in the audience hugging and singing and crying.

At that show years ago in Houston, Gord was still human, a reserved and funny man kind enough to make a stranger a cup of joe and chat sports with him. Bill, still a smoker at the time, ducked outside for a cigarette and got to meet the rest of the band, who hovered by the bus to sign autographs for their fans. Bill sensed there was tension between Gord and the others that night. The rest of the guys seemed to be patently avoiding Gord, and Gord them, a prisoner on his own tour bus. A family feud, of sorts? Everyone acted a little grumpy. Touring is never easy and sometimes immensely difficult, the long hours, the endless expanses of road, the wear and tear on bones and fingers and ears and vocal cords, psyches and temperaments. Each one of the Hip is a true artist, and anyone who knows true artists knows that they come with their own particular gorgeously crafted baggage. Throw them on the road and in close quarters for weeks or even months at a time, and just wait for something to blow at high dough.

But as is the case with the most resilient and healthy of families, the rough patch is long gone now. In Toronto on Friday night, the same as every other night on the Man Machine Poem tour, Rob Baker and Gord Sinclair and Johnny Fay and Paul Langlois formed around Gord Downie what could only be described as the most beautiful wolf pack of protection and love possible. The band has Gord’s back, and never has their unity been more apparent, their resolve to put on the best shows of their lives more visible.

And what a show it is. Everyone knows how the entire tour sold out in virtually minutes flat; in turn not everyone gets the privilege of actually seeing live the magic these gentlemen have created over the years on this final leg of their journey. At the end of the day, they are a family of artists, and they are in beautiful sync.

The production is at once somehow enormous and intimate. From Downie’s shiny designer suits by Izzy Camilleri to Jennifer Baichwal and Nick de Pencier’s extraordinary video montages that play throughout the show, culminating in footage of a lightning storm over Georgian Bay during the set break, it’s a visual feast as well as an auditory one.

There are also moments when an almost stunned hush overtakes the audience, few back-facing selfies flashing, no raucous and drunken hooting. Maybe it’s a generational thing, much of the audience not born into the smart-phone-selfie-instant-connectivity era, but likely that’s not the case. After all, we’ve adopted the new display of love: what used to be a show of Zippo lighters has become the Lake Fever sway of iPhone flashlights. Simply, we are all acutely aware of the historical nature of the experience. Sure, we’ll document the event with some photos, maybe video our favourite song, but there’s an undeniable awe hanging in the air. We live in the moment. We’re respectful of this experience. We could be at a tiny university show in Madison, Wisconsin or Guelph. A tight band plays just to us. We matter too. 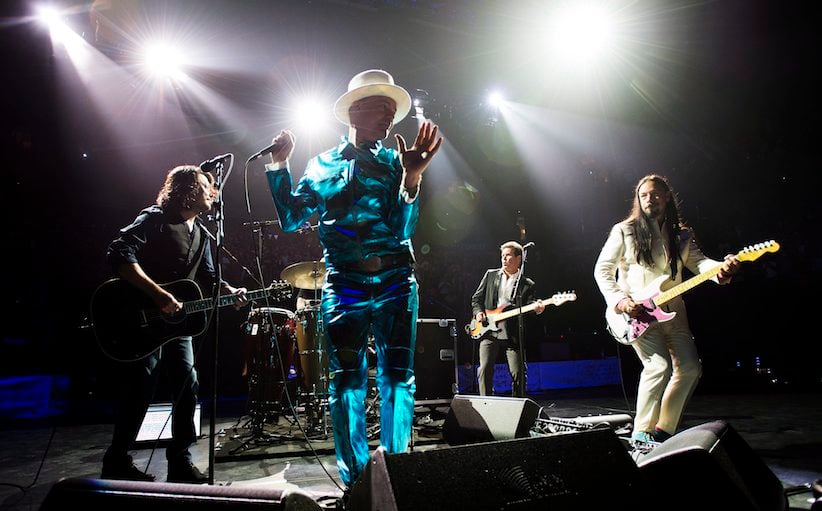 The Tragically Hip has never forgotten their audience, and that’s so much of their magic. While other bands who’ve been around for decades can appear robotic on stage, old dudes on Viagra performing their nth rendition of Song A or B or C, each and every one of these songs delivered on the Man Machine Poem tour is heartfelt, and for good reason. This is the Hip’s last Canadian tour, not because they’re breaking up or retiring, but because their front man has been told his days are most certainly limited.

The Hip refuse to do the same concert over and over. Every show’s set list is different. The Hip have never been a band to rest on their rock and roll laurels, and seeing them play and shimmy and dance across the country for one last go generates the same joy as seeing them your first time. From the opening snap of Johnny’s snare drum, the first iconic guitar lick from Rob, the first deep bass note from Gord S., the first haunting notes of Paul’s voice as he adds his own layers to Gord D.’s perfectly imperfect voice, all of this brings the crowd to its feet for the entire show. And when the last show airs nationally across the country from Kingston, the whole of Canada will be on its feet, too. After all, the Hip summer of 2016 will go down as a part of not just pop music history but shared cultural history.

Who are the Tragically Hip? Canadian icons, rock gods, media fodder, humans, parents, sons, brothers, poets, artists all, perfectly imperfect. Gord Downie doesn’t see a lot of people after the shows these days, but he specifically requested a few after the Hip’s first Toronto gig. He wanted to see a handsomely grizzled Cree friend who lost his teeth in a hockey fight and an 85-year-old retired schoolteacher in her wheelchair. It was one of Gord’s children’s birthdays, and a small motley group of misfits gathered to laugh and smile for photos, for this too short chance to catch up. Gord stands in the middle of these posed portraits, and—no joke—his arms seem to embrace everyone.

Legend claims The Tragically Hip found their name in the Michael Nesmith skit with a line that said, “[…] send some money to the Foundation for the Tragically Hip.” Legend also states they found it in an Elvis Costello song:

Maybe you don’t believe my heart is in the right place / Why don’t you take a good look at my face.
Other boys use the splendor of their trembling lip / They’re so teddy bear tender and tragically hip.
I’m never going to cry again / I’m going to be as strong as them.

Never has there been a band less teddy bear tender and less tragically hip than these five men, especially in the past weeks. It’s quite possible that the only dry eyes in the entire stadium over the hours of their show’s expanse are their own. There are more shows to see—miraculous shows—between now and the final televised concert in Kingston. We might cry, and probably cry again, but we can show the Tragically Hip we are all as strong as them. We got your back, guys. You are our family band. And we are your giant wolf pack.

Photo gallery: The Hip in Toronto

Fans take photos outside the Air Canada Centre ahead of the Tragically Hip Man Machine Poem tour stop in Toronto.