Why we're so attached to outdated Christmas songs

Classic Christmas pop songs tell us that a modern, urban Christmas isn't really Christmas at all 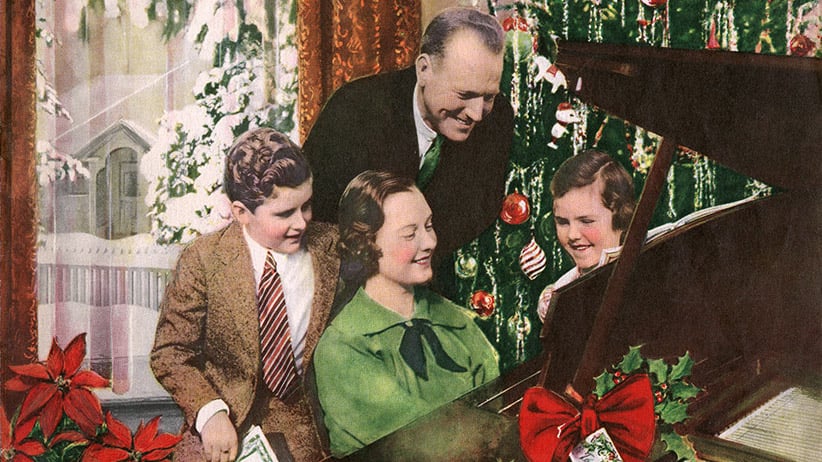 It’s Christmas music season: that (most wonderful) time of the year when, no matter what the prevailing style in pop music is the other 11 months, we’re thrown into a sort of musical time warp where it’s the 1930s and 40s all over again. But if the Christmas standards seem a little old-fashioned now, many of them seemed old-fashioned even at the time. One of the odd things about the Christmas canon is how it insists there’s only one “real” Christmas: a rural, snow-filled, electricity-free Christmas. It’s as if the writers hate themselves for living in a modern city, and want us to hate it too.

Perhaps the most famous Christmas pop song of all is White Christmas, whose introductory verse makes it clear that if you live in a place with no snow, you’re not really experiencing the season at all:

The sun is shining, the grass is green
The orange and palm trees sway
There’s never been such a day
In Beverly Hills, L.A.
But it’s December the twenty-fourth
And I am longing to be up north.

I’m dreaming of a white Christmas…

Other Christmas songs are even more explicit about what Christmas really means, and what it almost always means is something more or less resembling a fantasy version of rural New England. Most of the writers of the classic Christmas standards were urban Jewish composers, like Irving Berlin and Mel Tormé, but the city rarely figures in their work; the writers of Silver Bells (It’s Christmas Time In the City) said they were excited by the opportunity to write a song about an urban Christmas, since there hadn’t really been any before. Instead, the lyricists of these songs focused on images from a vanished world: “Parson Brown” is the all-powerful town pastor who meddles in people’s lives by asking them if they’re married (Winter Wonderland), chestnuts are roasting on an open fire (The Christmas Song), popping corn in front of that same fire (Let It Snow! Let It Snow! Let It Snow!), telling scary ghost stories (The Most Wonderful Time of the Year, a 1960s song that tries to recapture the style of the ’40s Christmas hits). Even a song like Jingle Bell Rock, which is supposed to be an updated rockin’ Christmas, is entirely set in the world where you go “gliding in a one-horse sleigh.” We normally think of pop music as something that tries to capture its own time. Christmas music is different. It tries to capture an earlier time, or a time that may never even have existed.

One reason for the anachronistic feel of so much Christmas music is that it is playing around with the imagery of traditional (and mostly public domain) Christmas songwriting. Jingle Bells was first published in 1857, when the world it portrayed was the modern world; 20th-century pop songwriters, assigned to write songs about a holiday they mostly didn’t celebrate, fell back on reconstructing the world of Jingle Bells. The songs are also rooted in other forms of pop culture, particularly sentimental visual art. The lyrics to Sleigh Ride, added by the skilled journeyman Mitchell Parish, compare the scene to “a picture print by Currier and Ives,” whose popular lithographs presented scenes of wholesome American life near the end of the 19th century. Currier and Ives had been out of business for decades when Parish wrote the line, so he was either setting the song in the past, or making a nostalgic reference to the pictures you might find in your grandma’s old house. Either way, the idea is that when you think of a sleigh ride, you think decades in the past, back to a pre-automobile world where you might know a local farmer and call him “Farmer Gray.”

Eventually there were a few Christmas songs that tried to modernize the form. It’s Beginning to Look a Lot Like Christmas is nostalgic in feel, but is clearly set in the city (“There’s a tree in the grand hotel”). As mentioned above, Silver Bells was intended to invert the usual setting: it was written for a scene where Bob Hope tries to demonstrate how to be a street-corner Santa. And I Saw Mommy Kissing Santa Claus, also written in the early 1950s, is about Dad playing Santa Claus (or, if you want to get really cynical, Mommy’s lover playing Santa Claus), something the average ’50s kid might know more about than sleigh rides and open fires. But by that time, most of the Great Christmas Songbook was already written, and most of it leans toward nostalgia and snow supremacy.

In theory, this should have made these songs fall out of favour. In the 1940s, at least, there were people who could remember what Christmas was like before it was commercialized and electrified. Today, these are dead images, and even the idea of looking out on a snow-covered field is becoming harder to understand: the fields are gone, the horses are gone, and in many places, the snow takes a long time to come, if it comes at all. The Christmas conjured up in Sleigh Ride is now almost totally imaginary, and you’d think people would feel excluded by such a narrow, region and time-specific definition of the Christmas season.

And yet it still works, probably because these songs were never supposed to be realistic. Again, White Christmas is the best example of what classic Christmas songs are really about: a dream of a Christmas season, which the singer isn’t experiencing now and may never have experienced at all. The implication is that no matter where you are, or even what religion you do or don’t practice, “Christmas” is something you value as an ideal state, a lost world of family togetherness and childish innocence. The theme of the Christmas pop song is that Christmas doesn’t feel the same as it did when you were a kid. So it takes us into the world of Currier and Ives engravings, 19th-century carols, pristine snow and self-popped popcorn. Even if we never experienced any of it, we sort of wish we had. Singing an old Christmas song from the ’40s, full of half-remembered images from the 1890s, is our way of experiencing that connection with an idealized past.